The Eyes of Orson Welles

In making a feature-length documentary about director, actor and pop culture icon Orson Welles, Mark Cousins did not choose an easy path for himself. There are already many written biographies and long magazines pieces about Welles, some of which are considered classics, and nearly as many documentaries about his life and work (or aspects of his life and work, zeroing in on particular films, such as "Citizen Kane," "Touch of Evil," the Shakespeare adaptations and, most recently, the posthumously released "The Other Side of the Wind"). On top of all that, Welles has been a fictional character both in movies about his own work ("The Cradle Will Rock," "RKO 281," "Me and Orson Welles") and and other people's (notably Tim Burton's "Ed Wood," where he offers solace to the title character at a low point).

"The Eyes of Orson Welles" doesn't rank with the best Welles scholarship, mainly because it's too overreaching and disorganized, and commits itself to central creative decisions that increasingly come to seem misguided. The movie is broken into five numbered sections, some of which seem specious in retrospect. One of these, "Love," is further broken into five subsections, arguing that Welles loved places, loved "visually," loved in a "chivalrous" way (or a way he thought was chivalrous), that he was omnivorous (which might or might not be a roundabout way of saying he repressed some homosexual inclinations), and that he and his work were haunted by "the death of love."

Equally problematic is the simultaneously serious/hypnotic and tossed-off-sounding narration by Cousins, whose career is marked by films whose subjects are framed this way. Here, Cousins' voice-over addresses itself directly to Welles, who died in 1985, as if delivering an extended eulogy, or writing letters that will eventually be deposited at a gravesite or burned on an altar. "Were you in a hurry to get old, Orson? Did your youth bore you?" "You adored Joseph Cotten, didn't you, and can I mention John Houseman?" A little of this goes a long way, and this is a longish film—and it has a payoff so bizarre that it nearly destroys the movie.

Cousins himself doesn't appear onscreen much, except in early sections, in particular during an interlude with Welles' third daughter Beatrice, who offers so many striking insights about her father that one wishes she'd been in more of the film's running time. Still, the emphasis on the filmmaker's circuitous ruminations on his subject t (which would've been embedded in the marrow of any documentary about Welles, regardless of how "present" the director was) puts "The Eyes of Orson Welles" in the nonfiction sub-genre of "Looking for X" movies, wherein the filmmaker's fascination with the subject is given nearly as much importance as the subject. Your mileage will vary, but after twenty minutes or so, I started to wish that Cousins' analysis of Welles in context of his art and biography had been allowed to play out in a more traditional or even "square" way, without the qualifiers of "this is my personal opinion" or the storytelling device of "Dear dead person, who meant so much to me."

There's a lot to admire here, though, particularly when Cousins' uses Welles' visual art (he originally trained to be a painter at the Chicago Art Institute) to connect his films, politics, and life. Although Cousins' isn't the first biographer to search Welles' sketchbooks, drawings, watercolors and oils for insight into the totality of his existence, I can't recall another that treats his fine art as a lens through which every other aspect can be examined.

Of particular interest is the lack of filled-in faces in Welles' art from the 1930s onward, after Hitler and Mussolini rose to power and authoritarianism started to spread. The documentary is astute in showing how "facelessness" became Welles' way of commenting on the soul-corroding influence of absolute power—a theme explored in everything from "Citizen Kane" and "Macbeth" through "Mr. Arkadin" and Welles' 1962 film version of "The Trial." There's a delightful moment when Cousins talks about how Welles' "took a line for a walk" over a shot of a roller coaster, right before a car comes into frame and embarks on a series of loops. Here, and in some other scenes, the film attains a crystalline focus and grace that mirrors Welles at his peaks.

Without spelling things out too much, Cousins makes us aware of the contrast between Welles' fine art, his work for theater and cinema, and his work on the page with ink, watercolor, oil and acrylic. Where Welles' film direction was often maximalist—deep-focus, marked by extreme angles and theatrical abstraction, constantly filling up foreground, middleground, and background as if trying to see how much information he could pack into a frame—his work with pencil, pen and brush often seemed to be daring itself to communicate as much meaning as possible while still leaving most of the canvas blank. In one brief scene, Cousins even counts the number of pencil lines in a drawing, the better to emphasize how Welles' attained maximum impact with seemingly minimal effort.

Cousins is never on firmer ground than when he's describing the expressiveness of Welles' lines, the way his choice of color impacts our emotional reaction to the work, and the use of negative space and blankness within compositions. This movie is iffy as both biography and unconventional documentary, but as a work of old-school art criticism, fronted by the kind of teacher whose classes you'd never skip, it's hard to beat. 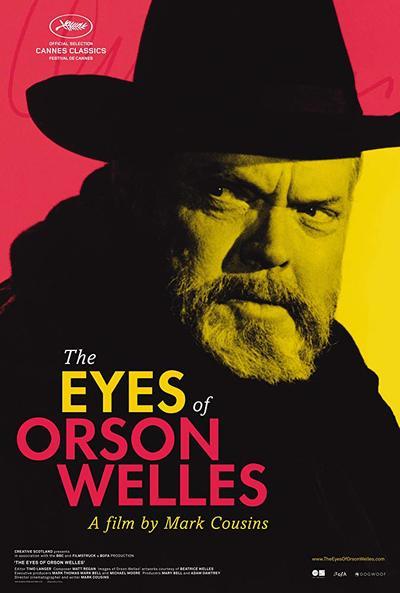 Beatrice Wells as Herself

Mark Cousins as Himself