The Other Side of the Wind

In Jean-Luc Godard’s 1968 film “La Chinoise,” one of the characters, Kirilov, announces, “L’art ne pas le reflet du réel, mais le reel de ce reflet.” Which translates as “Art is not the reflection of reality, it’s the reality of the reflection.” In “The Other Side of the Wind,” a film shot in the years between 1970 and 1976 and later (only partially) edited by Orson Welles, a character named Mr. Pister, a very young, whippet thin and presumably callow square of a film critic—played, not coincidentally, by Joseph McBride, who would go on to become, besides a fine critic and scholar in general, one of the key voices keeping Welles’ often misunderstood legacy alive—asks its bete noire-legendary director figure, Jake Hannaford, “Is the camera eye a reflection of reality or is reality a reflection of the camera eye?”

This citation of Godard sounds more like a piss-take when Pister continues “or is the camera merely a phallus?” This is meant to sound ridiculous, and it does, and yet the more you reflect on what’s actually in “The Other Side of the Wind,” the more the idea of that camera as phallus—or at least as impotent phallus desperate to achieve tumescence and usurp the passive voyeur status of the eye/lens—gains currency. Among other things, this picture from the director of “Citizen Kane,” “The Magnificent Ambersons,” “Touch of Evil” and several other masterpieces both mainstream and hermetic, increases the sex-and-nudity quotient of the Welles filmography not by a percentage but by a power.

The story, such as it is, concerns the 70th birthday party of Jake Hannaford, portrayed with vanity-free abandon and lemon-sucking bitterness by John Huston, who looks like he’s been dragged through hell and spat back up onto earth because hell found him too hard to digest. To this party have been invited dozens of friends, enemies, well-wishers, and chroniclers. Journalists, academics, TMZ-avant-la-lettre footage collectors, documentarians, and out-and-out spies. The other thread of the story is of the movie Hannaford is trying to complete, a trippy, arty, uncomfortable, almost dialogue-free chronicle of a woman (Oja Kodar, Welles’ lover and a credited co-writer of the movie) walking nearly naked through the world and happening on all manner of orgiastic activity while pursuing a male biker whom she seduces in a moving car in a sequence that’s virtuosic, dreamlike, and squirm-inducing all at once.

The Hannaford party is an assemblage of the footage shot by the invitees. In a narrated prologue, conceived and executed well outside of Welles’ purview, Peter Bogdanovich’s character explains the rationale behind the document. An extra-diegetic text before the film proper begins explains that this cut of Welles’ unfinished film is an attempt to “honor and complete” Welles’ vision.

What vision it finally presents is a continually paradoxical one. It is a curse on cinema and a blessing of it. Its explorations of sexuality near explicitness, but its musings on the subject have to do with nothing but secrets. A sniping critic/historian played by Susan Strasberg harps on Hannaford’s camera fixating on his movies’ leading men. She recalls that Hannaford had affairs with all the wives of his movies’ lead males, and theorizes that this was his way of sublimating his desire for the men. Certainly Hannaford’s fixation on John Dale (Bob Random), the hippie-curled leading man of the new project, is not healthy. Dale came into Hannaford’s life while the latter was vacationing. The older man believes he saved the younger when he was trying to drown himself. A drama teacher brought to Jake’s party has a different story about Dale’s own ambition. Repressed homosexuality is not especially emphasized here as a betrayal of one’s self, but “Wind” is a movie in which everyone is selling everyone out, or at least is susceptible to doing so. Its web of relationships is vertigo-inducing, and the breakneck cutting, constantly shifting film stock, and seesawing aspect ratios don’t construct the easiest through-line by which to track them.

“The Other Side of the Wind” is a very rich film and a very difficult one. I’ve seen it nearly three times now and what I intuit about the aspects of it that “work,” and those where the seams just show too nakedly shift all the time. Cameron Mitchell’s fired makeup artist, with his ridiculous straw hat and bathetic vaudevillian bearing, seems to have dropped in from an entirely different film, and I still can’t be sure that’s not entirely the point. Some of the compositions—an early shot on the studio lot, a low-angle into which move Mercedes McCambridge and a couple of other figures to make a nice Eisenstein-like three-figure composition that Welles expanded upon with just the right dolly-in camera movement—are vintage Welles, including uncomfortable closeups like those of Glenn Anders in “The Lady From Shanghai,” all of the tricks and trills pushed to their limits like a circus act gone mad. While the film-within-a-film, with its empty spaces and forced-perspective winks, is parodying Antonioni and other art-film directors, there’s also a self-critique or homage in the visual references to Welles’ own “The Trial.” In “They’ll Love Me When I’m Dead,” the fascinating documentary about the making of this film that’s also an excellent companion piece to it, Simon Callow, the actor, director, and Welles biographer says “I have a feeling, for which I have no evidence, that Welles didn’t want to finish ‘The Other Side of the Wind.’” This is followed by denials, some indignant, of the idea that Welles would not WANT to finish a film. Of course he wanted to finish; he was merely denied the opportunity.

As it happens, I agree with Callow, and I think there is evidence: it’s the movie itself. As a vessel for Welles’ self-loathing, which by this point in his life was arguably bottomless, “Wind” itself needed to have no bottom. The hundred hours of footage from which Welles worked on the feature was packed with self-inflicted wounds upon which he could pour salt, particularly with respect to his tortured relationship to the film culture he helped create, and more specifically his personal relationship with Bogdanovich. Down to the pettiest little thing. When Bogdanovich’s Brook calls Hannaford a “rough magician,” after a speech in Shakespeare’s “The Tempest,” and Hannaford “confesses” to Brook that he knows not the meaning of the word “abjure,” those who have read Bogdanovich’s interview book with Welles, “This Is Orson Welles,” should be able to hear Welles himself pretending he doesn’t know who Mizoguchi is.

In that book Welles says of Godard, “What’s most admirable about him is his marvelous contempt for the machinery of movies and even movies themselves—a kind of anarchistic, nihilistic contempt for the medium—which, when he’s at his best and most vigorous, is very exciting.” It’s not for nothing that Welles sets the ending of “Wind” at a drive-in theater, the inverse of a sacred movie palace, a place for the desecration of cinema and a pretext for sexual activity, and shoots it like it’s a touchstone site of the romance of the American West, which of course it is. Everything contradicts everything else in this film, while at the same time drawing perfect circular connections. What Godard had to say about Welles, in 1963, was this: “[M]ay we be accursed if we forget for one second that he alone with Griffith, one in silent days, one sound, managed to start up that marvelous little electric train in which Lumiere did not believe. All of us will always owe him everything.” Fun fact: on the slates for “Wind,” the cameraman was written in as “Bitzer.” If you get that joke—for “Wind” is a movie best appreciated only by individuals as enriched and as damaged by cinema as Welles was himself—you will get this movie. 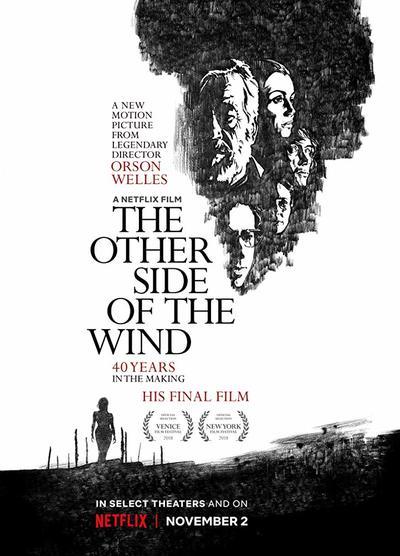 Oja Kodar as The Actress

Tonio Selwart as The Baron

Claude Chabrol as Himself

Paul Mazursky as Himself