"The Evening Hour," directed by Braden King, based on a novel by Carter Sickels, takes place in a small Kentucky town, where the mine has closed, leaving its population adrift, forgotten, and ravaged by poverty and the opioid epidemic. There are no social services, and the drug dealers, profiting on the sickness of nearly every member of the population, fight over scraps of territory. It's a potent subject matter, and directly relevant to the current crisis, a drug epidemic overshadowing all others, so much so that it's a national emergency, particularly in the Appalachian area. Unfortunately, "The Evening Hour" falls back on clichés, telling its story with a palpable sense of distance from the characters, from their struggles, and from the world they inhabit.

Cole (Philip Ettinger) is first seen traveling around town, visiting elderly people, bringing them supplies, treating everyone with gentleness and respect. He visits his grandmother (the great Tess Harper), giving her an envelope of cash. He's excited about his new girlfriend, Charlotte (Stacy Martin). Cole is damn near saintly! But a dark truth hovers over this kindness. Cole deals in opiates, scarfing them from the nursing home where he works as an aide, as well as picking them up from an ex-con friend Reese (Michael Trotter). When Terry (Cosmo Jarvis), an old high school friend, returns to town, hoping to "diversify" the drug trade by cooking meth, he clashes with not only Cole, but with Everett, the drug kingpin in town (Marc Menchaca). Cole begs Terry to be careful.

There are added emotional melodramas. Cole's mother (Lili Taylor) skipped town a long time ago, and returns for a family funeral. Cole is hesitant to forgive her. Charlotte gravitates towards Terry, attracted by his ambition. A pretty bartender (Kerry Bishé) is thrown into the mix.

It's almost unforgivable to put great actors like Tess Harper and Lili Taylor in your movie and give them next to nothing to do. Most of the performances are either cliched or indistinct, with Cosmo Jarvis the most notable exception. He oozes energy, charisma, aggression, seduction. Many of the actors struggle to portray themselves as having grown up in this downtrodden hard-scrabble world. Not Jarvis. He seems like he actually lives there. Every time he shows up, the film sparks to life.

One of the things "The Evening Hour" does well is show how Oxy has affected pretty much every single person in the town. They're either addicts, recovering from being addicts, or dealing drugs. Oxy has seeped so much into the town's culture that it is the town culture. But once the film focuses in on the territory clash between the various drug dealers, "The Evening Hour" loses what interest it might have had. Taylor and Harper vanish from the movie. Cole is too vague a character to hold the center.

Most distressing, the pacing is inert, the tone muted. When explosive moments come, they are forced and inauthentic. The cliched dialogue stands out. The Appalachian scenery, captured by cinematographer Declan Quinn, is stunning: mist collecting in the valleys, autumn foliage covering the slopes, sunrise on lonely empty roads, all of that beauty in direct contrast with the economic devastation of the mining town in its midst. But the world of "The Evening Hour" is viewed from the perspective of an outsider, one who's already got a plane ticket out of there after the movie shoot.

A comparison with a recent film: "Holler," which came out earlier this year, takes place in a similar economically devastated environment, among people on the margins of mainstream life, where a safety net is non-existent, and where people have to do what they must to survive in a world totally bereft of prospects or possibility. Unlike "The Evening Hour," "Holler" thrums with urgency and high stakes; the scrap-yard business, and the characters involved in it, is so intimately observed the film often feels like a documentary. "Holler"'s talented director, Nicole Riegel, grew up in that world. She knows what it's like. She's been there, and this shows in her film in every frame. "Holler" is viewed from the inside. "The Evening Hour" is poverty tourism. 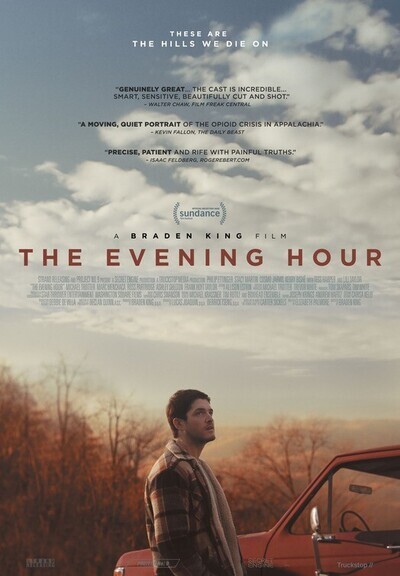