Nicole Riegel's debut feature "Holler," about a young woman who becomes a scrapper, is a film to treasure—an intimate drama about family and work, steeped in details that can only have been captured by a storyteller who lived them.

The movie follows a resilient, resourceful high school senior named Ruth (Jessica Barden). Her family is struggling to survive in a dying industrial community in Ohio. She's torn between leaving town to take her chances at college or staying behind to help her big brother Blaze (Gus Halper) and her mother Rhonda (Pamela Adlon), a drug addict who's drying out in county jail. All of the characters are vividly etched and have a wire-tough realness that has become rare in American cinema.

But if you stand back and look at everything that happens, "Holler" is more than a coming-of-age story. It's a wrenching portrait of life in the 21st century United States, a country that is losing what little sense of communal responsibility it had fifty years ago, and is not only shredding what's left of its safety net but is selling off the remnants of middle-class life, like the metal scrappers who scavenge the town for resalable material because it's hard to earn a living otherwise.

The story is straightforward: here is a town, here are some people, here is what they do to get by. Most of "Holler" is conveyed not through expository dialogue (except for a few necessary but clunky bits at the start) but caught-on-camera observations. We watch the characters work, play, communicate with their loved ones and coworkers, and move from point A to point B. And that's all we need to get the bigger picture. The teamwork of Riegel, cinematographer Dustin Lane and editor Kate Hickey creates an eerie you-are-there feeling.

The film begins with Ruth running down a street holding two bags of aluminum cans she stole from a local business while a employee chases her on foot. Ruth hops into a pickup truck driven by her brother and they head to a local scrapyard owned by Hark (Austin Amelio), who quotes them an unfairly low price.

Hark is a magnetic, long-haired, chain-smoking hustler, played with gusto by Amelio, a face familiar from "The Walking Dead." He tells Ruth and Blaze he can't offer them a better price on cans, but if they want to make real money, they can his crew on higher-yield scrapping runs. These involve breaking and entering businesses to collect discarded piping and other bits of scrap and—the Holy Grail for scrappers—copper wiring. Some of the crew's targets appear to be abandoned. Others are merely closed for the night.

Much of the first section sticks to three settings: the ramshackle home where Blaze acts as temporary guardian to Ruth (the water was turned off before the start of the story and we never see it being turned on); the county jail where the siblings visit Rhonda; and the frozen meal factory where Rhonda used to work. Rhonda's best friend Linda is still employed at the factory, although there are rumors that layoffs are coming. Linda is a hard, wise woman with a wry smile. She's played by the great character actress Becky Ann Baker, a performer of such depth that she can sketch a life in a single reaction shot.

Once Ruth and Blaze join Hark's scrappers, the emphasis shifts, and "Holler" becomes kind of a crime picture. The activity re-centers on Hark's home in the forest, which has the feel of a party house or a gang's headquarters: beer, weed, deafening music, chortling laughter, macho preening, women sitting on crew guys' laps. Hark shows off a crossbow. There are guns on the walls.

You can tell that Blaze and (to a lesser extent) Ruth have lived (relatively) more sheltered lives and are liberated by the danger and edgy camaraderie of Hark's world. Nobody robs an armored car or a bank. It's not that kind of film. But this type of scrapping is quasi-legal or illegal, and from the plethora of buzz saws and crushing machines to the risk of getting shot by security guards, there's no shortage of ways a person could get maimed or killed. Ruth is a natural at her new gig—so good that Hark starts grooming her as a sidekick, and perhaps something else—but she's also smart enough to know that the path she's heading down is a dark one.

It's great to see Baker, Adlon, Amelio, and other superb, lesser-known actors playing believable, real-world supporting characters, all rich enough to merit a feature of their own. Their work really pops, and it's contextualized by the lead performances of Halper (of "Cold Pursuit" and TV's "Madam Secretary") and Barden (of Channel 4's "The End of the F*****g World"), which are more reactive and internal. You watch the two of them as they watch everyone else.

The peak of Halper and Barden's teamwork happens in a scene at a roller rink. Blaze makes out by the video games with his girlfriend, a manipulative, grabby young factory worker that Ruth thinks is trying to trap her brother having his baby. Meanwhile, Ruth skates around the rink with Hark, who is drunk and shamelessly flirting with her. Brother and sister glare at each other in reproach and warning. There's no intelligible dialogue in the scene. Sometimes the characters aren't even speaking. But you feel the weight of everything that's happening and what it means for the family. The actors say it all with their faces. When people use the word "cinematic," this is one of the scenes they should be thinking of.

"Holler" is a drum-tight feature (90 minutes, including credits), packed like the proverbial single suitcase that you're allowed to fill before fleeing a house fire. The details are chosen so judiciously that the story seems to expand as you recall it. The setting is based on Jackson, Ohio, the filmmaker's hometown, and much of the story is told from Ruth's point-of-view. It's easy to see where the script's sense of lived experience and emotional truth comes from. Unlike a lot of people in the entertainment industry, Riegel doesn't represent the third or fourth generation in a showbiz dynasty, nor did she come from a family that made a comfortable living in some other business and supported her while while she spent several years interning at Disney or CAA. She grew up poor and served in the Army before turning to filmmaking. There are filmmakers from privileged backgrounds who appreciate what it means to struggle, but even the best sometimes make you feel as if it's all a bit abstract to them. You sense their sympathy for the weight of the struggle, but not the weight itself.

That's never the case with "Holler." Watching the film, you have no way of knowing what details are drawn from life and what's made up, but it all feels not merely as if it could happen, but as if it did happen. And you can tell that it was dramatized by a person who is used to seeing beauty in places that we're told aren't beautiful, and looking for inner peace while living a life that could grind even a strong person down.

You get the sense that Riegel could tell you more stories of this place and its people. She knows this territory the way Ruth knows her own hands, which become increasingly battered by scrap work as the tale unfolds. Every frame has the aliveness of remembered experience, from the shots of plump stray cats climbing fences and loping through junkyards to the images of icicles melting, smokestacks billowing, and streetlights strobe-flashing overhead as a truck drives at night.

Shot with available light on real locations with a handheld 16mm film camera, "Holler" has the creamy-grainy look of mid-20th century American documentaries—the kind exemplified by the Maysles' brothers' "Salesman" and Barbara Kopple's "Harlan County, USA," where a tiny crew would just go someplace and live there for a spell, returning with a snapshot of what it was like. It's a modest classic—hopefully the first of many from a major new voice in American cinema. 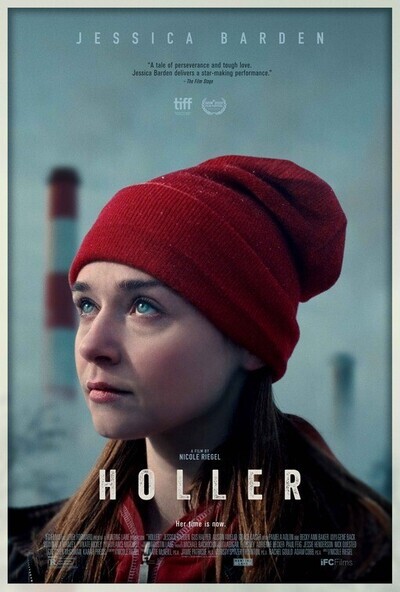