A man and his boy

Mark Webber's “The End of Love" connects and lingers by making incredible effort seem natural. Following his 2008 ensemble debut, "Explicit Ills," actor/director Webber combines a structured narrative with something that feels like near-documentary realism. He plays "Mark," a Los Angeles-based actor struggling over the recent death of his girlfriend, Evelyn (Frankie Shaw), with whom he fathered a two-year-old son Isaac (Isaac Love).

A Philadelphia transplant to LA, Webber examines how his actor's ego collides with new role as a father. It's one thing for Mark to brag about a high-profile movie part, but when Isaac gives him a forehead tattoo with a permanent marker, humility is really his only option.

With his real-life son joining him, Webber is not paired with a performer in the usual sense. Lively Isaac is simply goes about his existence while a film is expertly assembled around him. As a result, skilled DP Patrick Lucien Cochet needs only to capture the conversation between Webber and his boy. Their interactions evade real-time; they unfold almost as a crystallized memory — compressing laughter, tears, and wonder into a sensory collage — and as both character and director, Webber truly displays his talent.

The half-improv approach is a risky one, especially as Judd Apatow has made intra-family line-ups almost a special effect, a shorthand promising some form of parental truth. But there's never a gimmicky statement found in Webber's work, only a series of confident questions.

Webber's clarity extends outside the home. An early audition with Amanda Seyfried (one of many cameos) has the ring of first-hand embarrassment. As Isaac yells excitedly in the corner, the rest of the people in the room sit in excruciating silence.

As a single parent named Lydia, Shannyn Sossaman ("The Rules of Attraction," "Road to Nowhere") radiates warmth. This is the most natural and welcome performance I've seen from her. Though her and Mark's relationship begins predictably, it evolves as naturally as the one between father and son.

However, the film weakens in its second half: Mark's attempt at a night out finds a young Hollywood cast (Aubrey Plaza, Michael Angarano, Jocelin Donahue) at Michael Cera's cavernous mansion. Isaac is left with a Craigslist-sourced sitter -- along with this part of the film.

Cera's brief character (credited as “Micheal”) is a tonal oddity: He's playing at a swaggering version of himself — comic relief and a comment on Mark's outsider status — but we don't need an example of this; Mark's inner journey does the job just fine.

By the time Cera screams first-world problems while waving a revolver, the film shifts into an alternate reality. Luckily, the drama immediately returns to Mark and Isaac. Several positive signs — Lydia, an acting gig, and a pet goldfish for Isaac — have been gathering, but Mark slowly tilts toward wrecking them all. You feel for Isaac's safety the entire time, but only in the film's second half does this dawn on Mark.

The most impressive feat of Webber's film is noticing how little Isaac is actually present. You get the feeling that, for him, "The End of Love" is just another home video, like the ones that bookend the feature -- only with nicer cameras and a theatrical release. This is Webber's flawed but treasured document of his son, an attempt to share a portrait of their developing relationship, and — later on — a chance for Isaac to see his dad's parental reflections captured on-screen. 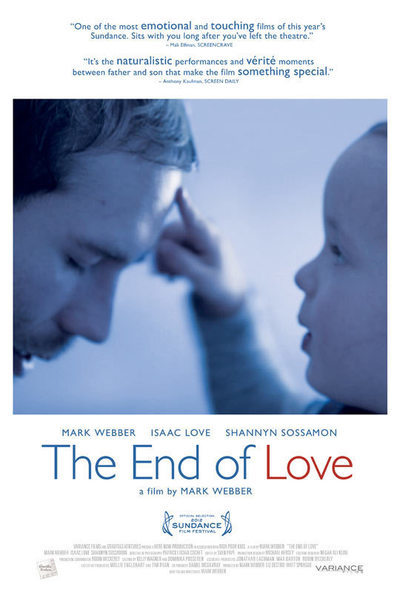