Since the early ‘90s, Salma Hayek has carved quite a niche for herself as an actress with a serial array of singular spitfires. She’s been a gunslinger’s sultry squeeze in “Desperado,” a blood-sucking stripper in “From Dusk to Dawn,” a fierce one-of-a-kind painter in “Frida” and the voice of slinky Kitty Softpaws in “Puss in Boots.” Hayek on screen can be a formidable heat-radiating presence when given the right material (aka not an Adam Sandler comedy), and knows precisely when and how to turn it on.

But in “Beatriz at Dinner,” Hayek turns down the thermostat and assumes a cool, calm and, yes, beatific demeanor as an L.A.-based Mexican-born masseuse with magic fingers and holistic healing abilities whose connection to her ailing clients at a touchy-feely cancer clinic is almost empath-like. She is also at one with the universe, as signified by the dogs and bleating goat (the better to protect it from an angry neighbor) that crowd her bedroom at night or the image of the Virgin Mary and a toy Buddha that decorate her car. With a fringe of baby bangs, minimal makeup and a functional wardrobe, Beatriz obviously values the spiritual over the material. The serene sight of a de-glammed Hayek, beautiful and miraculously youthful at age 50, is a compelling one indeed.

Her Beatriz seems uniquely weaponized to pull off a one-woman rebellion against a walking, talking emblem of the toxic political climate that continues to pollute our world in what is essentially one of the first blatantly intentional culture-clash allegories for our Trump-ian times. As directed by Miguel Arteta and written by Mike White, whose previous envelope-pushing partnerships include “Chuck & Buck,” “The Good Girl” and TV’s “Enlightened,” the pair provides the circumstances for a dinner party from hell at a generically showy Newport Beach seaside mansion, the sort of a place where champagne popsicles on solemn holidays of remembrance would feel right at home.

The story fully kicks in when Beatriz, who makes house calls, ends up getting stuck in a wealthy client’s circular driveway when her clunky Volkswagen breaks down. Cathy (welcome-sight Connie Britton, resurrected from her country superstar’s demise on TV’s “Nashville” as the only other sympathetic character) considers Beatriz one of the family after she did wonders for her now-cured college-age daughter during chemotherapy. She naturally asks Beatriz, who has to wait for a mechanic friend to show up, to join the fancy gathering she is hosting that night.

Trouble is, it is a crucial business function for her brusque husband (David Warshofsky), one that includes his boss—real-estate tycoon Douglas Strutt (John Lithgow, who manages to ooze menace, condescension and charisma in equal measure as an obvious though more socially adept Trump surrogate)—and junior associate Alex (Jay Duplass, in full-on entitled jerk mode), along with their shallow couture-bedecked spouses (Amy Landecker as Strutt’s third wife and Chloe Sevigny).

You might be thinking you don’t want to witness a darkly humorous yet disturbing re-enactment of what we see and hear on cable news every hour. And it’s true that White’s script often creeps a little too close to being what it intends to satirize. But Lithgow’s smartly modulated performance as Strutt (got to love that name) is the key here, since the actor allows us to observe just how such a vile, egotistical-yet-ingratiating captain of industry could easily manipulate others to do his bidding while justifying the often-deadly sins against humanity and the planet in general.

Combustion between the smirk-prone privileged few and the selfless if somewhat naïve health-care worker is inevitable, but the filmmakers wisely allow it to simmer, with the assist of way too much alcohol. Eventually Beatriz—not used to drinking wine—finds she can no longer remain silent and begins to overshare her own history. That causes the rich folk to gradually expose the cesspool depths of their corrupt lifestyles while celebrating their financial gains at the expense of other living beings. When Strutt boastfully shares a photo of bloody rhino he shot on an African safari, matters reach a breaking point as Beatriz exclaims, “Are you for real? This is disgusting.”

Arteta and White are aware enough to tap into the discomfort of those who are appalled by our country’s sudden turn of events and the self-satisfaction of others who find themselves with greater license to exploit their worst impulses than ever before. After the loud confrontation, an already tipsy Beatriz retreats into her room for the night with a bottle of wine and a joint she has found in a dresser while the others launch fire-powered paper lanterns into the sky as they make wishes. And the filmmakers then engage in a more violent form of wish-fulfillment before leaving us dangling with a more open-ended closing sequence—which seems about right when we don’t know which way the tweet wind will blow day after day.

Yes, this type of dinner party scenario could have benefited from a bit more nuance on the menu as the filmmakers are too on the nose as they ape the national debate, the shift in priorities and general unease that has consumed the citizenry since the presidential election. But Hayek turns Beatriz into her own breed of wonder woman, Lithgow’s Strutt is definitely a super villain of sorts and their head-to-head battle is clearly worth seeing even if, in real life, it has only begun. 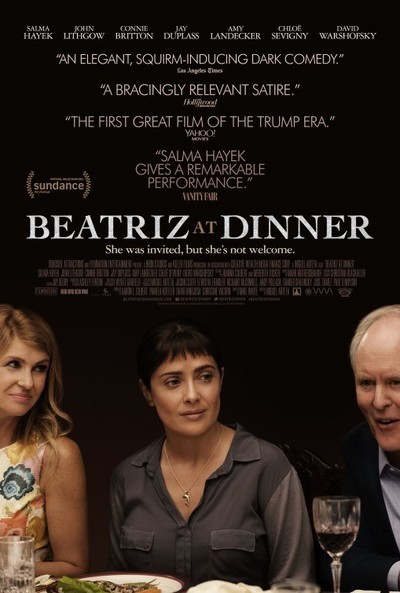 Rated R for language and a scene of violence.