A tale of honor, revenge and violence in Czarist Russia, the IMAX-shot “The Duelist” is a spectacular, impressively realized period drama that’s notable not only for the talents of writer-director Aleksey Mizgirev but also the sponsorship of producer Alexander Rodnyansky. The latter may be the most ambitious and savvy of current Russian producers, having shepherded Andrey Zvyagintsev’s “Leviathan” to international success and an Oscar nomination two years ago. With “The Duelist,” Rodnyansky is taking a more commercial turn, one that depends less on art-house refinements than on plush production values, action-movie tropes and a couple of stellar lead performances.

Set in St. Petersburg in 1860, the film may look at first like a Masterpiece Theatre-style trip back to the gorgeous wardrobes and polite manners of centuries past, but this is by no means the Russian equivalent of a Jane Austen adaptation. As it unfolds, Mizgirev’s story reveals some of the entrancing complexities and astonishing twists of 19th century novels. But one is less likely to be reminded of Dostoyevsky or Turgenev than of, say, Alexandre Dumas. Throw in a bit of Quentin Tarantino and Sergio Leone and you’ve got a cinematic package that’s far more appropriately brutal than genteel.

It’s interesting to contemplate the film’s appeal to contemporary Russian audiences since it leapfrogs over the Communist era to evoke a time when the country was ruled by a proud and wealthy aristocracy. Distinctions of class, in fact, are paramount in this tale, which is solely concerned with the prerogatives of the nobility.

Among those, we learn as the film begins, are the rules governing dueling, the standard means for an offended noble to defend his honor. The code lays down an intricate array of rituals and restrictions, but allows that one party may sometimes be replaced by another nobleman. Thus do we enter the story of one Yakovlev (Pyotr Fyodorov), a professional duel fighter. When we first see him, Yakovlev is facing off against another man in an elegant room, accompanied by their seconds and those conducting the duel. Yakovlev apparently has nerves of steel: After the two men choose pistols, he offers his temple to his opponent. The man pulls the trigger and his gun doesn’t fire. Yakovlev then raises his pistol to the man’s forehead, fires and puts a bullet through his head.

This is the first of several duels we see the film’s protagonist fight, and it’s soon clear that he’s at once skilled, shrewd and lucky. His intrepid and very illegal business is conducted with the help of a partner, Baron Staroe (Martin Wuttke), who arranges Yakovlev’s assignments. (This character and one or two others speak German throughout the film, for reasons that one assumes are mainly commercial.) And behind Staroe, there’s the shadowy figure of Count Beklemishev (Vladimir Mashkov), who has secretly masterminded Yakovlev’s recent career while also attempting to woo wealthy Princess Martha Tuchkova (Yuliya Khlynina), whose younger brother Prince Tuchkov (Pavel Tabakov) is soon to face Yakovlev in a duel.

If you were to suspect that Yakovlev has big secrets in his past, that he and Beklemishev have a history, and that the puppet master and the puppet will eventually face each other on the dueling floor—you would of course be correct. “The Duelist” is, quite appropriately, one of those movies that resembles a Russian doll: there are machinations within machinations, plots within plots, secret agendas within secret agendas. Though the narrative conceits can sometimes begin to feel overly ornate, they generally adduce the kinds of pleasures such storytelling at its best entails, and occasionally touch on some genuine profundities of character and destiny.

Mizgirev orchestrates all this with steady skills in handling small moments as well as the huge canvas that an obviously ample budget has allowed him. Cinematographer Maksim Osadchiy favors crisp, dark images that bring out expanse of luxury and squalor in Andrey Ponkratov’s superlative production design; by any measure, “The Duelist” offers the most sumptuous evocation of Czarist Russia seen in any recent movie.

The film’s leads are also major assets. Both are stars in Russia and look like they have considerable international potential. With the smoldering dark looks of the young Mel Gibson or Colin Farrell, Fyodorov could well have a future as a cosmopolitan romantic lead or Marvel superhero. And Mashkov, who’s already appeared in “Mission Impossible – Ghost Protocol,” would be a great candidate if James Bond needs any more Russian villains. With these stars and its other strengths, “The Duelist” is a welcome indication of the current Russian cinema’s commercial ambitions and potential. 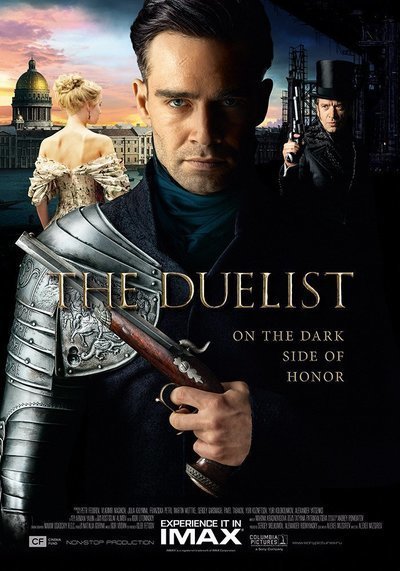 Rated R for strong violence and some sexuality/nudity.