The Disappearance of Eleanor Rigby: Them

"The Disappearance of Eleanor Rigby: Them," a film about trauma's impact on a couple and their families, poses a conundrum for critics, and perhaps for regular viewers as well. Writer-director Ned Benson originally conceived it two movies retelling the same story from the perspectives of the wife (Jessica Chastain) and the husband (James McAvoy). Chastain told Vulture that in the version focused on the title character, she's just playing the character, and in the version focusing on the husband, she's playing the husband's subjective perception of that same character. After its debut at the 2013 Toronto film festival, this diptych was purchased by the Weinstein company, whose boss Harvey Weinstein decided that a pair of films that ran four-plus hours and repeated key moments were a tough commercial sell; Benson was therefore ordered to re-edit both films into a combined version, subtitled "Them," which opens today in limited release. The original, dual versions, subtitled "Him" and "Her," will be released to selected art house theaters Oct. 10. So eventually you'll be able to experience the filmmaker's vision in—how many versions is it? Three? Two-and-a-half? More than one, at any rate.

The question for the critic is, how can one judge the truncated version, which is being released weeks before the general population has a chance to the split-up original version?

I grappled with this before attending a screening of "Them," then ultimately decided to wait and experience it the way most people will, starting with the combined version and then sampling the original pair. My reasoning is that people who sample "Them" and don't like it won't be inclined to watch a version of the same story again at twice the length, and people who'd rather experience the filmmaker's original vision will just wait until Oct. 10 anyway. In any event, I'll review "Him" and "Her" on their release dates, when non-critics will have a chance to see it. This surely isn't the way the filmmaker imagined his film(s) would be seen, but that's how they're being released; so I'm going to watch "Them" without skipping ahead to "Her" and "Him," for fear of coloring my perception of the combined version.

The verdict: in an era in which the mainstream entertainment press seems to care about nothing but films featuring superheroes, monsters, robots and Oscar-baiting "prestige" stories, "Them" is a welcome outlier. It's intelligent and adult, and the principal cast—which also features Bill Hader, Jess Weixler, Viola Davis, Isabelle Huppert, Ciaran Hinds and William Hurt—is excellent. The film itself, however, is a mixed bag—a handsomely photographed but often too leisurely trip into the psychic terrain of grief and denial, about a loving couple who are split up by tragedy and driven to alienated and even self-destructive behavior, but who never entirely shake the upper-middle-class conditioning that keeps them from tipping irrevocably over into chaos.

The story begins with a flashback to Eleanor (Chastain) and Conor (McAvoy) skipping out on a check after a romantic dinner and canoodling in Tompkins Square Park afterward. A flash-forward catapults us a few years down the timeline. Eleanor Rigby (cutely named because her parents met in a crowd anticipating a Beatles reunion that didn't happen) wanders along a bridge as if in a numb trance, then climbs a fence and jumps into the river, where she's rescued and taken to a hospital. She moves back in with her parents (Hurt and Huppert) and her single-mom sister (Weixler) in their suburban Connecticut home, then tries to break out of her routine by enrolling in an NYU course taught by Davis's professor (a colleague of Eleanor's dad, also a prof). Her husband has no idea what happened to his wife except that she left their apartment one day and didn't return. Thus the title.

"Them" cuts between Eleanor's attempts to rebuild her life solo and Conor's fretting over both his wife's whereabouts and the financial struggles of the restaurant he opened with his best friend (Hader). There's an anxiety-of-influence angle in Conor's story: his philandering father (Hinds) is a successful chef who's been operating a once-hot, now popular-but-passe restaurant for many years; son could really use dad's help in the form of kitchen jobs for him and his buddy, but is too proud to ask. When Conor learns that Eleanor is still alive but has moved back in with her parents, he stalks her around town, even sitting a few rows behind her in class and trying to pass her a note as if they're in junior high. They reconnect and pull apart and reconnect; there are recriminations and apologies and infidelities and soft dialogue delivered in tight closeups.

The scenes between Eleanor and her father Julian are the film's best. Hurt, once a cooly analytical hunk and now a much softer and warmer character actor, captures WASP reticence better than any performer since Donald Sutherland in "Ordinary People," a film whose Wonder Bread Protestant rectitude the Connecticut scenes evoke. Huppert's Mary, a Frenchwoman who was a Dionysian siren in her youth but has settled into a soul-dampening role as a professor's wife, initially seems vague, but grows distinct over time. Looking at her and Hurt in relation to Chastain, you sense a psychic as well as genetic lineage. The relationships in the movie feel lived in. They make real-world sense.

The problem is, they're not imagined, written and directed in such a way that you can spend three or five or eight minutes in a scene watching the characters simply exist, and think, "Yes, this is fresh, this is nourishing" without also thinking, "Why are we still in this scene? Can't we move along?" The movie's too polite and too schematic, and too content to be polite and schematic. And the way that it delays revealing the source of the couple's pain feels strangely coy. I say "strangely" because "Them" doesn't otherwise carry itself like a film that's waiting to spring a "powerful" revelation, as mediocre plays, films and TV episodes often do, in lieu of delivering specifically observed and idiosyncratic moments that reveal previously unexamined universal truths.

It seems instead like a film about what life does to you—the ordinary miseries that affect every family from time to time. The details differ from life to life, but the baseline experience is the same. In light of that, to withhold the cause of pain (see how I'm dancing around it, for fear of being chastised for "spoiling" it?) seems cheap, a word that does not apply to the film in any other way. Eleanor's dad has a marvelous, perhaps key scene where he tells his daughter that in every relationship between mates there's an event so dire that it tests the resolve of both partners, and that if they don't find a way to push past it, the relationship will die. That's what Conor and Eleanor are going through. That's what the movie seems to be about: the lived experience of grief, and what it does to a relationship.

And it's often wise about showing us what it's like to exist inside those moments. Benson and his cinematographer Chris Blauvelt often move their camera strategically, so that we see a character's reaction to a puzzling or upsetting sight before we see what inspired that reaction, and there are some offhandedly lovely compositions, such as a forlorn Eleanor standing way down in a subway stairwell on a rainy night, screen right, the left half of the perfectly-bisected screen filled up by wet negative space. This is a patiently directed movie with a rare sense of how the layout of a room can affect interactions within it. It also manages to make Eleanor a private person without seeming as if it's holding her at arm's length, no small feat.

But for every vivid line—such as Julian telling his daughter, "Tragedy is a foreign country; we don't know how to talk to the natives," a statement that might seem too literary were it not spoken by Hurt—there are many more that feel like earnest but unexciting placeholders, or like dialogue you'd hear on a TV series that's intelligent but inconsistent, and that you grade on a curve because they're cranking out 22 hours of it each season. ("I never wanted to be a mother," Mary tells Eleanor, before we've gotten a chance to know either of them.) And there are moments where your appreciation of the supporting actors' honesty and precision might be dampened by the realization that they've been shoehorned into the film (this is especially true of Davis' professor, whose connection to the rest of the characters never feels organic).

Evaluated without inside knowledge of what we might've seen had we waited for "Him" and/or "Her," "Them" is an honorable but disjointed domestic drama: a good and honorable try. It smartly revisits well-trod territory ("The Accidental Tourist" by way of "A Man and a Woman"—the latter showcased via a framed print on a wall of the Rigbys' home), but it often seems to be padding out the spaces between plot points with meandering accounts of observed behavior that feel a tad actor's-workshoppy even at their best, and that sometimes play like excerpts from a formulaic Hollywood romantic comedy that's been denuded of laughs. (Lovers Frolicking in the Park, Lovers Caught in the Rain, and Surprise Car Accident all make appearances here.) It is, to quote Steven Soderbergh's blisteringly honest assessment of his own debut, "sex, lies, and videotape," a movie that's better acted than directed, and better directed than written. It's filled with actors whose faces you could stare at all day—but do you really want to? You'll answer that question for yourself, and when you do, you can check back here to compare notes with me.

And yet, even as I wonder if this "combined" version may do the entire project more harm than good, I still recommend seeing "Them." It's the sort of film that one should have an opinion on, and any feature that generates buzz on the basis of formal daring should be supported on principle. The star rating at the top would be two-and-a-half if I were only judging what's on the screen. The other half-star is for audacity. 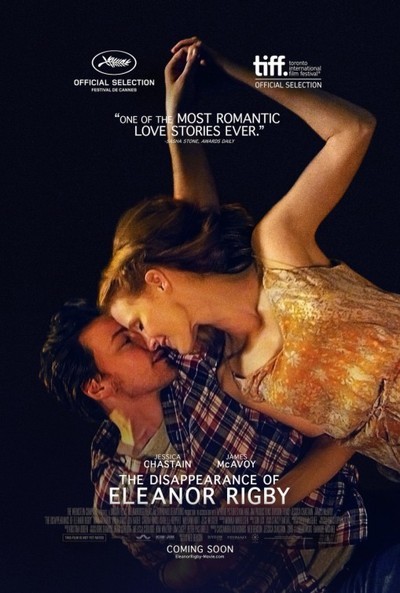 The Disappearance of Eleanor Rigby: Them (2014)