The Death of Dick Long

These three little words launch the cascading comedy of errors "The Death of Dick Long." Three friends, Zeke (Michael Abbott Jr.), Earl (Andre Hyland) and Dick (director Daniel Scheinert) finish up their band practice (or: "band" practice), and decide to "get weird." Getting weird means getting trashed, setting off fireworks in a field, accidentally setting a couch on fire; in other words, not particularly weird at all, just general country-boy debauchery (albeit filmed in a hallucinatory dream-like way). But things take a turn, a turn not revealed until much later. The next thing we see, a panicked Zeke and Earl are driving Dick - lying in the back seat, covered in blood - to the hospital. What could have happened? Did a firecracker go off in his hands? Zeke and Earl make the first of an endless series of terrible decisions by dumping their friend's body outside a nearby hospital and then running away (but not before struggling down a hill carrying Dick, even dropping him a couple of times). They also take his wallet, so he'll be a "John Doe" to the doctors who find him. You don't have to be a criminal mastermind to perceive their bumbling incompetence.

Unfortunately, poor Dick dies. His injuries are so horrific - including rectal hemorrhaging - that the doctor calls in the local sheriff (Janelle Cochrane) to investigate it as a homicide. The sheriff is an elderly woman, walking with a cane, carrying a Thermos of what seems to be heavily spiked pineapple juice. However, underestimate her at your peril. Working alongside her is Officer Dudley (Sarah Baker), an eager new cop who jumps at the chance to work a homicide in such a rural area. Meanwhile, Zeke and Earl struggle to get through the following 24 hours. They both behave in incredibly suspicious ways. Dick's worried wife (Jess Weixler) confronts them both: they were the last to see her husband, and he didn't come home. Is he having an affair? Earl packs up his truck and gets ready to flee town, and Zeke lies - badly - to everyone - including his wife Lydia (Virginia Newcomb) and his young daughter (Poppy Cunningham). The back seat of his car is drenched in Dick's blood, and how Zeke ends up "handling" this is so dim-witted it's almost admirable. The fact that we still don't know what happened to Dick - besides the fact that it was an accident - adds to the free-wheeling maniacal mood. Our minds run riot with possibilities.

This is Daniel Scheinert's first feature flying solo as a director. In 2016, he and his partner Daniel Kwan (known as "The Daniels") directed "Swiss Army Man," one of the weirdest buddy comedies of all time, if you can even call it a buddy comedy. In reviews, critics struggled to come up with useful comparisons, just in order to describe the damn thing. At a certain point, though, all comparisons fell short. "Swiss Army Man" was its own unique thing. A man (Paul Dano) stranded on a desert island uses the gassy body of a washed-up corpse (Daniel Radcliffe) as jet-propulsion to get him back to the mainland. Just hearing the description may have turned some people off, but "Swiss Army Man" was a wacky tour de force, both survival drama and cosmic contemplation of the often-funny human condition.

Unlike "Swiss Army Man," "Death of Dick Long" takes place in a realistic world, a small town in Alabama. The situation is human-sized, and doesn't launch into the fantastical stratosphere like "Swiss Army Man" - but it doesn't need to. In some ways, "Death of Dick Long" is the mirror-reverse of "Logan Lucky." The characters come from similar worlds, rough and rural, and yet the unlucky Logans - underestimated and condescended to - pull off a dazzling difficult heist. Zeke and Earl couldn't bluff their way out of a speeding ticket. "Death of Dick Long" gets so much mileage out of how incompetent Zeke and Earl are, how incapable they are of doing one thing right, whether it's washing blood-stained clothes, dealing with Zeke's bloody car, or lying to the police.

In a 1950 interview with the New Yorker, Charlie Chaplin said, "The best definition of humor I ever heard is that it’s getting people in and out of trouble." That's what "Death of Dick Long" does, and it does it really, really well. It's been a while since a movie has made me laugh out loud, not just from funny dialogue, but from the situation itself. The hilarity operates on a bunch of different frequencies - dialogue, character, situation - and Scheinert knows how to keep all these frequencies buzzing simultaneously. One of the reasons all of this works is the cast, who play it 100% real. Michael Abbott Jr. has a private freak-out moment involving a lamp that is as funny as anything I've seen all year.

Scheinert hails from Alabama, as does screenwriter Billy Chew, and the film is filled with local well-observed details; it's not at all a tourist's view of Alabama. The town, the surrounding areas, are presented with lived-in familiarity: A "Jesus Saves" sign, a random woman struggling with a runaway lawnmower, a crow perching on a church spire, the wood-paneling in the sheriff's office, the swimming hole that's not as deep as it seems. Cinematographer Ashley Connor ("The Miseducation of Cameron Post") has a sharp eye for evocative atmospheric details. There's beauty here, yes, but absurdity too.

There are a couple of attempts at deeper themes. Zeke says at one point, "When you're lonely, it doesn't always go away when you get married." Zeke sweats shame and loneliness. Officer Dudley observes that human beings are "inscrutable on the insides." There are many things we just can't know, even about our neighbors. (And maybe we wouldn't want to know!) Scheinert smartly does not hammer home these themes, or sum things up with a monologue about what we've all learned. We haven't learned anything except ... if you find yourself in Zeke and Earl's situation, do exactly the opposite, start to finish. 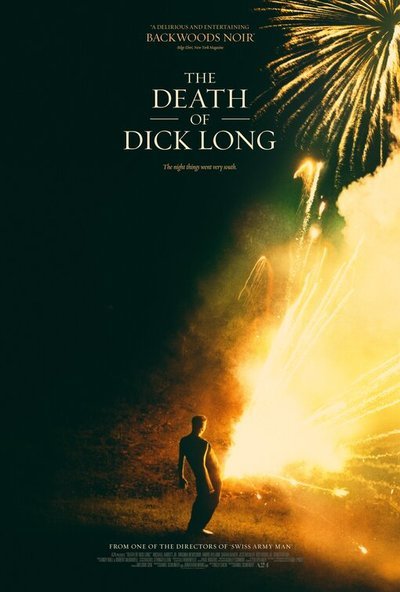