The litmus test for any good horror film is whether or not you feel it hovering over your bed at night, daring you to fall asleep. For long stretches of Billy Senese’s sophomore directorial effort, “The Dead Center,” it certainly seems like that kind of movie. Like most films assigned for review, I was required to watch this one on my laptop, and it was about halfway through when I began regretting that my computer was placed in front of a blank television screen. The deeper the movie got under my skin, the more paranoid I became of the closet door reflected behind me and the untold horrors that could come creeping out of it at any given moment. Without ever relying on gratuitous gore, the picture contains moments of such bracing intensity that I found myself resisting the sudden urge to shield my eyes. On that level of in-the-moment visceral impact, Senese’s cinematic spook house delivers the goods, yet as soon as it ended, the spell it cast evaporated rather quickly. The plot seems sillier the more one mulls it over, yet it’s a testament to the film that we’re not preoccupied with questions of probability for the duration of its running time.

What makes “The Dead Center” a slight letdown is the fact that it marks the first major onscreen acting role of a major filmmaking talent, Shane Carruth, since his own 2013 masterwork, “Upstream Color,” as well as his first producing effort outside of his personal work. His involvement alone seems to promise a headier and more ambitious project than what we ultimately get, which is yet another derivative suspense yarn about the inescapability of death. A former software engineer, Carruth made an enormous splash in the indie world with his remarkable 2004 debut feature, “Primer,” a micro-budget sci-fi opus involving time travel. It was followed nearly a decade later by “Upstream Color,” which ranks alongside David Lynch’s “Twin Peaks: The Return” as one of the most profound cinematic homages to Hitchcock’s “Vertigo” in its exploration of how we go about defining ourselves in an inexplicable universe. In contrast, “The Dead Center” is evocative of every Shudder offering about deadly infections spread by zombified killers, all the way down to its recycled denouement. It jolts the senses without ever quite tickling the brain.

Carruth plays Daniel, a psychiatrist whose compassion for patients at the hospital where he works causes him to bend protocol, even if it means advocating for them without their consent. Like Tom Skerritt’s well-intentioned ship captain in “Alien,” Daniel attempts to save lives only to end up with blood on his hands. When the corpse of a suicide victim (Jeremy Childs, star of Senese’s first film, “Closer to God”), identified only as John Doe, suddenly comes back to life, Daniel finds him in an unresponsive state and mistakes him for a mere victim of trauma. Pretending to hear a whispered confession from the man indicating that he suffers from depression, Daniel ensures that the Frankenstein-esque stranger will be granted a room at his hospital. It’s the sort of institution where orderlies do a very poor job of keeping doors locked, while restraining abusive doctors by handcuffing them to flimsy stretchers. In an entrancing sequence, cinematographer Andy Duensing views Daniel’s administered hypnosis from John’s perspective, coaxing us to concentrate on a spot placed in the dead center of the frame. There are a few too many instances where the film telegraphs a scare before it occurs, either through camera angles or music, and it’s all the more chilling when the payoff never arrives in the way that we expect.

Sound mixer Jeremy Mazza and his crew deserve immense praise for keeping us contained within John’s psychological space as his awareness fleetingly awakens before being overtaken by a malevolent force. He explains it as “blackness spinning inside of him,” and in a parallel subplot, we discover its potential origins through the investigation of a detective (Bill Feehely). A recurring motif of mysterious, overlapping voices not unlike those featured in György Ligeti’s “Adventures” may represent the remnants of souls sucked from unsuspecting mortals by John whenever he succumbs to demonic possession. He leaves the faces of his lifeless prey frozen in the same gape-mouthed expressions Samara favored in “The Ring,” suggesting that the horrible sight they observed when peering into John’s mouth may have been either the godless void of eternity, or simply outtakes of spinning chairs. The glimpses we get of this supernatural robbery are all the more unsettling in their clipped, almost subliminal fragmentation, and each are enhanced immeasurably by the nightmarish sound design. Even the blandly reassuring hold music on a congested phone line begins to take on an eerie aura, since its monotonous rhythms could easily put anyone into a catatonic state.

I wish the film had found a less conventional way of wrapping up its story, complete with the usual nihilistic twist that cuts ironically to upbeat music over the end credits. We’ve seen a lot of this before, but Senese manages to build an immersive atmosphere of dread that allows his film to stand apart from less imaginative retreads utilizing similar tropes. Childs makes a credibly imposing monster, while Carruth and Poorna Jagannathan (so excellent earlier this year in Pippa Bianco’s “Share”) are well-matched as a doctor and boss who maintain a sense of trust even when they spar—until their bond is frayed by betrayal. They are so good that I wish the story surrounding them could’ve been less easy to dismiss. For pleasing pre-Halloween viewing, you could do a whole lot worse than “The Dead Center.” Just don’t expect too many nightmares afterward. 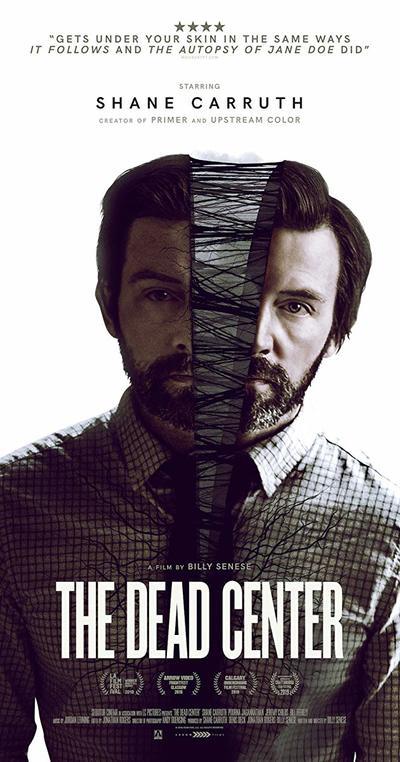