“I try to find a cinematic language that shifts from the male gaze to the female experience—not the female gaze because for me, as a woman, it’s not ever about the gaze, it’s about the experience.”   Deborah Kampmeier

Pippa Bianco’s debut feature, “Share,” based on her own 2015 Cannes prize-winning short of the same name, was greeted with considerable acclaim upon its premiere at this year’s Sundance Film Festival, where it earned two major accolades. Yet like far too many recent, uncompromisingly honest adult dramas, it never received a theatrical release, arriving instead on the small screen. In addition to its signature blend of boundary-pushing shows and mainstream blockbusters, HBO has become as vital a distributor of top-drawer indies as Netflix or Hulu. In contrast with other programming on HBO, including the recently-renewed "Euphoria," with which Bianco is creatively involved, “Share” is a relatively restrained work. Nothing is made explicit aside from the internal agony of its heroine, whose headspace we occupy so fully, we can’t help sharing in every tremulous emotion that ripples across her face.

Whereas the short film version of “Share” had a recognizable star, Taissa Farmiga, in the lead role, the feature is headlined by Rhianne Barreto, a 21-year-old from west London who will likely be unfamiliar to most American viewers, but not for long. Her performance is nothing short of a revelation, drawing us in even as she keeps her feelings to herself, avoiding any move that could potentially brand her as the object of attention. Barreto plays Mandy, a 16-year-old who awakens on the lawn outside her house, after a night of heavy drinking with various classmates. She goes about her typical daily routine until an iPhone video begins circulating online, showing her lying unconscious with her pants pulled down, while surrounded by a group of chuckling guys.

“Share” becomes a deeply haunted film as Mandy’s world grows increasingly smaller. Nothing bonds high school chums quite like basking in the illusion of impermanence, tricking themselves into thinking that their actions will have no long-lasting repercussions. By simply appearing against her will in the footage, Mandy has inadvertently broken an unspoken pact with her peers to keep their after-school activities a secret. She refuses to fight against her removal from the girl’s basketball team, as punishment for doing exactly what her fellow players have done—albeit off-camera, since she’s well-aware of how poorly she’ll be treated if deemed an exception.

With her former friends now perpetually out-of-reach and in blurred focus, the ostracized girl finds herself the target of laughter echoing in seemingly vacant hallways. There’s as much palpable tension in this story as in any horror yarn, with Bianco heightening Mandy’s disorientation in numerous inventive ways. Suspicious voices lead her into a darkened classroom, only for the door to be slammed shut. Her sight is blinded by car headlights, maliciously operated by an unseen driver. An ongoing stream of offensive texts arrive from unlisted numbers in her inbox, disrupting her train of thought with every “ding.” Reverberating beneath these indignities is the primal fear of losing control felt by all teens as their bodies morph beyond recognition. The last question any high schooler wants to hear is “You ok?”, one of many cryptic messages that flood Mandy’s phone with sudden rapidity as soon as the video is made public.

An equally fitting title for “Share” could’ve been “It Follows,” since the notorious events of which she has no memory have caused a scarlet letter to hover over her at all times, as deftly suggested by the score from Henry Laufer (a.k.a. Shlohmo), emulating the waves of anxiety that threaten to cast her adrift. We only see the residue of violent acts, such as when her dad, Mickey (J.C. MacKenzie), returns bloodied from an altercation in a hardware store with the father of one of the alleged abusers, who has the audacity to claim that Mandy is just as responsible for the footage.

Luckily, her parents are not clueless archetypes or conservative zealots. Mickey can’t fully grasp his daughter’s behavior, and there are traces of blame in his voice when he pointedly asks Mandy, even after her home-schooled solitude, “Don’t you think you’ve been out enough?” Yet he later redeems his wrongheadedness when Mandy erupts, saying that it was her voluntary choice to drink and hook up, to which he affirms that nothing she did gave anyone the right to take advantage of her. The understanding exuded by Mandy’s mother, Kerri (a touching Poorna Jagannathan), is immediate and essential, as is her advice that “the longer you wait, the fewer options you will have.” Gestures of support are also given to Mandy by her close friend Jenna (Lovie Simone, the standout star of another Sundance highlight, “Selah and the Spades”), and a sensitive boy, Dylan (Charlie Plummer of “Lean on Pete”), whose fidgety demeanor indicates he may know more about what happened than he lets on.

Bianco and her ace cinematographer Ava Berkofsky make subtly artful use of recurring motifs, most notably the lights morphing from murky blue to clear white that assist a therapist in unearthing any buried memories Mandy may have of the fateful night. The colors race across the screen, mirroring the passing streetlights she recalls from her otherwise forgotten ride home, where she ended up on the lawn. As the lights illuminate Mandy’s face, they fade back to blue, signifying her fragmented recollections that have long since eroded. After her friendly chat with Dylan, editor Shelby Siegel cuts to one of the ants that have wandered into the house, a result of Kerri absentmindedly leaving the sliding door open. This visual linkage between the ant and Dylan accentuates how he serves as an embodiment of the outside world that Mandy yearns to rejoin, even if it requires her to look beyond certain horrific truths.

The very final scene is bound to be a controversial one, though it is a testament to the film’s greatness that we understand Mandy’s actions, even as we cry out in protest. Bianco has called the ending optimistic, and during a Q&A held at the Film Society of Lincoln Center, she stressed how most acts of assault are made with the best of intentions, which does not invalidate their status as assault. At 87 minutes, this film is only a half-hour longer than the standard episode of “Euphoria,” and that show’s sizable audience would benefit from flocking to “Share” as well, since both programs offer an invaluable lesson in the particulars of consent.

Though we are made acutely aware of every mode by which Mandy is being watched—from gossiping cliques to surveillance cameras—Bianco never lets us become disconnected from the world that resides within her heroine’s mind and soul. Scene after scene provides a masterful example of how cinema can channel what filmmaker Deborah Kampmeier dubbed “the female experience,” immersing us in the sort of fleeting nuances often left on the cutting room floor. As Kerri explains to her daughter, Mickey doesn’t know that this sort of abuse happens all the time because, as a man, “he didn’t have to.” Let’s hope that films like “Share” will begin to change that ever-resistant tide. 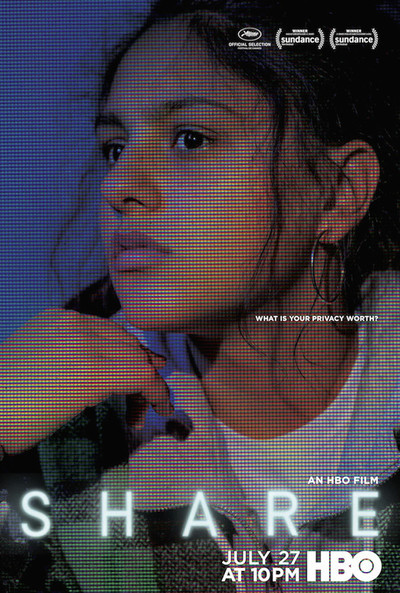 Rated R some disturbing sexual content, teen drug/alcohol use, and for language