"Tangerine" is a comedy about a transgender prostitute looking for her pimp's girlfriend on Christmas Eve, shot with an iPhone camera. That description sounds like it could have been written as part of a parody of a film festival schedule. But the movie is the real deal. As written by Sean Baker and Chris Bergoch and directed by Baker, it's assured and immensely likable, and truly independent in story and style.

The heroine is Sin-Dee Rella (Kitana Kiki Rodriguez), who gets out of jail after six weeks and learns from her best friend Alexandra (Mya Taylor) that the pimp she's in love with cheated on her while she was away—and with a cisgender female, of all things. This betrayal is established in the opening scene of "Tangerine," a conversation near the front window of a coffee shop. The scene lasts several minutes and is carried entirely by the performers' energy and humor, and by Baker and Radium Cheng's innovative photography. The movie was shot with an Anamorphic widescreen attachment, and the colors are super-saturated to the point where Sin-Dee and Alexandra might as well be characters in a Technicolor musical. The result is at once edgy and glossy, adjectives you don't normally see paired. Sin-Dee withdraws into sullen rage and stalks through the neighborhood. She spends the first half of the movie looking for the girlfriend, Dinah (Mickey O'Hagan), whose blond whiteness and God-given ladyparts amount to a double insult. During the second half, she's looking for her pimp, Chester (James Ransome, aka Ziggy on HBO's "The Wire"). Woe betide the bastard: Sin-Dee has fire in her eyes.

Sin-Dee's odyssey through Hollywood provides the film's main action, but there are a couple of parallel stories. One involves Alexandra's attempts to get everyone to come see her perform that night at a local nightclub; she hands out postcards when she's not chasing after her friend and inquiring about the targets of Sin-Dee's wrath. The second strand belongs to an Armenian cabdriver named Razmik (Karren Karagulian) who is married and has a child but frequents transgender prostitutes on the side. His tastes are quite specific, and he won't settle. In one of the movie's most revealing scenes (in every sense), Razmik picks up a prostitute that he assumes is his type only to discover that she has a vagina, and angrily demands that she get out of his cab immediately.

This scene could stand for "Tangerine" itself. It creates its own world, one with different definitions of "normal" or "acceptable" than Hollywood or even mainstream indie cinema usually offers, and the film is most thrilling for that reason. The originality extends to the setting and how it's presented. Long sections of "Tangerine" consist of shots of people walking and walking and walking and walking to get anywhere in Los Angeles, sometimes after having waited on a bus that seemed as though it would never arrive, or taking a cab because they were too old or too drunk to drive their own vehicle, or because they don't have a vehicle, or can't have one. You almost never see a Los Angeles movie about people who don't own cars. This is a minor point in the movie's greater scheme, but it seems like one key to appreciating the movie's specialness.

None of this should imply that the film is a flawless masterpiece. Like the recent American indies "Gabriel" and "Runoff," both of which I liked quite a bit, "Tangerine" has a brief running time but still feels padded in places. Some of the dialogue sounds too improvised (even if it was scripted). The ending seems to be aiming for a spectacular, screwball meltdown, but it nearly implodes the movie, because it goes and on and on, and the various storytelling threads that converge there haven't been properly guided toward their supposedly inevitable collision. It often plays like an attempt to force coherence on an otherwise endearingly loose movie.

And certain aspects of the story are—as Internet thinkpieces are found of saying—problematic, particularly the violence that Sin-Dee inflicts on Dinah, grabbing and dragging and lifting and even slapping her repeatedly, over the course of several scenes. "Tangerine" treats this action as outrageously funny; it seems to expect us to write it off as, "Well, this is just what would happen in that world," a valid enough observation, but one that only takes us so far. True, the violence is balanced by subsequent scenes of Sin-Dee and Dinah and eventually Alexandra reaching a kind of understanding, and even displaying tenderness toward each other. But the later scenes don't cancel out the sour taste left by the earlier ones. This is a case where the problem isn't what's being shown, but the film's evident attitude toward what it's showing us, at the moment that it's showing it. That we rarely see transgender characters in movies who aren't prostitutes is an entirely separate issue that I'm sure will be discussed in months to come—but here, too, we have to keep such misgivings in context: American films rarely show us worlds like these, and when they do, the films don't tend to get much attention.

If it were possible to time-warp "Tangerine" back a few decades, it could be part of that wave of indies that redefined American cinema in the eighties and nineties, with features like "Go Fish," "The Living End," "Clerks,"  "The Brother from Another Planet" and "She's Gotta Have It"— works that, acting- and storytelling-wise, were rough around the edges, but compensated by depicting worlds rarely seen onscreen, with warmth and confidence. "Tangerine" has that kind of vitality. It turns murals and signage, palm trees and Spanish tiled strip-mall roofs into "production value," and has the guts to let key scenes play out as silent montages scored to dreamy synthesized music cues, like something out a Michael Mann film. Sin-Dee and Alexandra and Dinah and Chester and Razmik are great characters, played by actors with tremendous energy. They seem to have existed before the opening credits rolled. After the closing credits have faded you'll think about them, and wonder how they're doing. 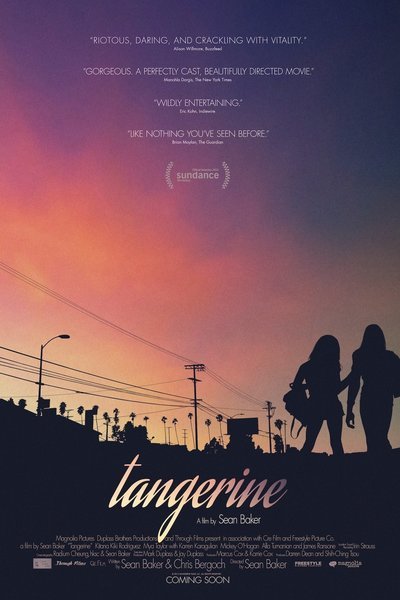 Rated R for strong and disturbing sexual content, graphic nudity, language throughout, and drug use