With the adrenalin pump of a top-of-the line sports special latched onto the poignant story of a loving family in trouble and trauma, "The Crash Reel" is also the tale of a modern-day Icarus. His wings didn't melt, but his brain cracked. He lived, but he learned to question the trip.

The film is about Kevin Pearce, the fresh-faced, ingenuous and totally rubber-limbed snowboarder destined for a brilliant career when a practice run for the Olympic trials in 2009 landed him just the wrong way. The disaster was caught on video by a passerby, and it's a recorded metaphor for life's tragedies: the fluke of it all, the why.

The movie is compelling in other ways, too. It’s thrilling for even a novice fan to watch Pearce traversing the "half-pipe"—a U-shaped, deep snow trench with twenty-two foot walls on each side—down one side and then up the other with amazing spins at the top. And then doing it again, pushing higher each time. Like all pros, he makes the incredibly difficult look easy. But behind all this we also see the long, nearly obsessive hours of practice, the careful monitoring of his food intake.

Using the backdrop of a rivalry between Pearce and the more flamboyant red-haired "Flying Tomato" Shaun White, the Oscar-nominated docum.entarian Lucy Walker had access to miles of family films and file footage. We get what we might expect and hope for from a personal sports doc: watching Kevin as a baby with his loving family, his junior dives and dumps. Of the four Pearce brothers, it was Adam who was predicted to be the star athlete in this Vermont family, but Kevin's grit won out.

And right away you know this doc will be several cuts above feel-good sports films about overcoming odds. Otherworldly images of a ghostly snowboarder alone, playing, and gravity-free as if moonwalking are poetic. In structure, too, the filmmaker is brave. Early on, she breaks the bad news tastefully, using the amateur tape. Though nothing can top the description of a snowboarding mate remembering Pearce's post-accident eye—swollen, going off in the wrong direction (and yes, he was wearing his helmet). Kevin's own determination, and the loving care of his apparently well-insured family—not all athletes are so lucky, we learn—keep him alive, and eventually get him on his feet. Yet even the rehab scenes have their own appeal, with intriguingly positioned images of medical scans of Kevin's traumatic brain injury. (The cinematographer is Nick Higgins.)

In the snowboarding footage, the crowd's adulation is palpable. The night games are particularly thrilling: the lights, the breath freezing in the air, the cheers. You get a contact high. They are exuberant young dudes, living it up on those flimsy-looking boards. If you forget how young they are, a chuckle-filled televised interview with Kevin gives some of the details of getting kicked out of Shaun's house where he was rooming. Rivalry much?

But after the accident, Shaun, who's interviewed many times in the film, gets increasingly reflective. He has had nine concussions. What has happened to Kevin may be giving him pause: through subtly edited footage of Shaun in action, it seems even some of his moves may be getting less daring.

Other interviews are similarly intimate, and poignant. (Walker and her cinematographer spent 2½ years filming the Pearce family in their home.) Mom, Pia Pearce, describes the moment when she got the news of the crash. She also speaks of what it is like to raise another son, David, with Down syndrome. The Pearces never wallow, however. Nor, amazingly, does David, who turns out to be one of the many heroes of the movie. Clearly adoring his brother, whom he calls "Best Brother, Best Snowboarder," David speaks with insight of his own trials. A lesser filmmaker might not have been able to integrate the theme of the two very different disabilities without overload or confusion.

But now there is a new wrinkle: Even after the rigors of recuperation, Kevin can't wait to snowboard once again. Like many athletes, he's hooked. We even see a serio-comic sequence with the caption: "Kevin goes snowboarding without telling his parents." He can't quite make a few hurdles, and we hold our breath because we have learned that another brain injury will spell curtains. "Do you want your family taking care of you for the rest of your life?" his dad asks.

"The Crash Reel" takes up the tricky topic of the perils of extreme sports: a short sequence focuses on free-style skier Sarah Burke, who died after an accident in the same spot where Kevin had his collision. "I look at dirt bikers like they're crazy," says one snowboarder. "They look at us the same way." A wiped-out athlete who will never be the same says bitterly, "The crowd wants to see us crash."

Indeed, we are "treated," if such a word applies, to a smasher of a dynamic montage of bang-ups. But director Walker tries not to take sides, even including the remark from X Games commenter Sal Masekela about an athlete who had passed: "The brave do not live forever, but the cautious do not live at all."

It's all part of the perplexing question: what if the thing you love the most may kill you? It would be a spoiler to say what solution Kevin has come up with, but it's an admirable one. 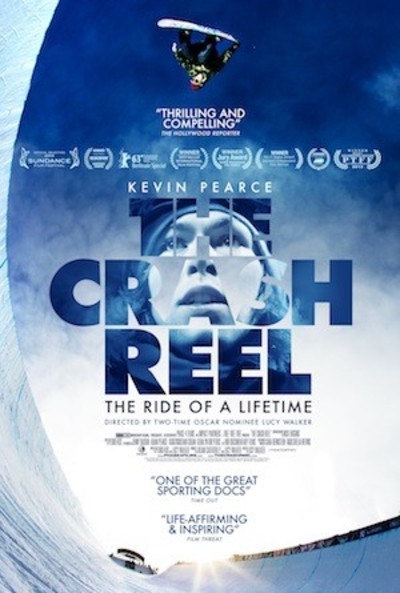 Kevin Pearce as Himself

Shaun White as Himself

Scotty Lago as Himself

Jake Burton as Himself