How to make Hollywood poetically tragic when most of the time it's just plain old depressing? The players are forgotten, abandoned, chewed up, spit out and they die everyday, and the show goes on. Geniuses and visionaries have to conform or remain in obscurity with a black cloud following them for the rest of their professional lives. We may never know the vast array of Faustian bargains director Ari Folman was offered after his 2008 film "Waltz with Bashir" was nominated for an Academy Award. For an analogy we might look to the story of Palestinian animator Ralph Bakshi, whose long, illustrious career came to a public halt after Hollywood neutered his vision of the now-largely-forgotten "Cool World." Bakshi knew what he was doing. Hollywood thought they knew better. Nobody won. Folman apparently skipped a public battle over creative control, choosing instead to make a movie about what happens when artists throw themselves at the mercy of the studio system. In "The Congress," Folman's fourth film and second animation/live-action fusion, talent is an organism to be isolated and studied under a microscope, and genius is more curse than blessing.

Actress Robin Wright (playing herself) is at the end of her tether. Her son (Kodi Smit-McPhee) is losing his hearing and she can't afford to do anything about it because roles have dried up. She's become too difficult and her last dozen films have bombed. The boss of her studio (a typically slimy Danny Huston; never not a delight) offers her one last role. In exchange for a lifetime in retirement, she will give her digital image to the studio for any use they want to put it to. If they want "Robin Wright" to make movies, they no longer have to ask. They just plug her image into a blue screen setting and make "her" act for them. The idea couldn't be any more distasteful, but after a long hard look at her life, and with her son's condition worsening by the minute, she ultimately signs on the dotted line. Then the film jumps ahead twenty years and turns 2D. What happens next is harder to describe.

"The Congress," playing fast and loose with a source novel by Stanislaw Lem, splits from its version of reality at the 45-minute mark, and at that point becomes a decadent post-modern classic. Wright is invited to a Futurist Congress by her studio (a "restricted, animated zone") and becomes embroiled in a bizarre bit of mental espionage involving a grizzled rogue played by (who else?) Jon Hamm. If it's difficult to put into words what Wright gets up to when she becomes a cartoon, that's partly by design. Sorting out dream from reality would be difficult enough if everything didn't look like one of Bakshi's loony fantasias. "The Congress" has to be both the dystopian minutia that Jonathan Pryce suffers through in "Brazil," and the high-flying daydreams into which he escapes. The physical properties of the futurist congress are the externalization of Wright's dilemma as an artist. Her personality is a liability and her physical properties only matter inasmuch as they can be repurposed at will by a ravenous audience, so why should the world around her be any different? The congress of the title is a place of limitless possibility, palpable menace and almost unbearable melancholy. After all, who would need to escape to a world of elastic existences except those whose lives were already devoid of meaning?

The film's central question is heartbreaking and clearly required a little soul searching from Folman. His cartoon world is like Plato's retreat for animation buffs. Everywhere you look there are traces of Max Fleischer, Frank Tashlin, R Crumb, Walt Disney, Chuck Jones, Studio Ghibli and, of course, Bakshi. It's a wriggling, hilarious headtrip that any fan of underground cartoons would be thrilled to be trapped in, but Folman isn't content to draw in black and white. "Waltz With Bashir" was a wry mix of "Waking Life," Al Jazeera and "The Things They Carried," and it was angry to its core. In "The Congress," that anger has been replaced with a flamboyant, seductive cafard. Folman knows that without motion pictures, so many lives would be upended. Directors, crew members, actors and critics and thousands more besides who have found their lives' true calling depend on the success of the industry. If tomorrow we could end disease but it meant the end of motion pictures, who would give up fantasy for reality? That is the terrifying core of "The Congress." We need stories to mask the hollowness of existence. Movies have given my life more meaning than any religious text ever has, but they're as distracting as they are enlightening. There is no denying the sense of dread and remorse I felt when, in one particularly dispiriting shot we leave a cartoon garden of Eden for a grimy, hopeless reality redolent of "Children of Men" or "1984." "The Congress" is a roll call of the orgiastic pleasures and bountiful comforts that art provides, and, a reminder of what waits for us when we leave the theater. 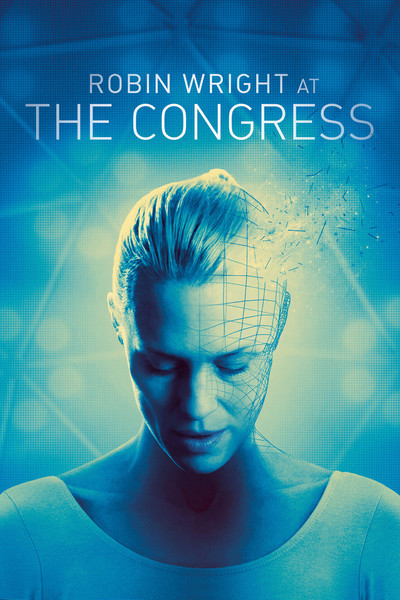