The movie's about a big international competition in San Francisco among six world-class pianists who are fighting for a $20,000 first prize and a two-year concert contract. The movie has two counterpoints to its main theme. One involves a love affair between two of the finalists, Richard Dreyfuss and Amy Irving. The other one, ridiculous but forgivable, involves a Russian piano teacher who defects to the United States, creating an international incident that causes the competition to be postponed a week.

Both of these story lines are somehow time-honored, once we realize that The Competition is not intended as a deadly serious treatise on big-league pianists, but as an offbeat love story. Dreyfuss and Amy Irving have a real charm and rapport as the two lovers, especially in the scenes where they argue that love has absolutely no place in a piano competition not if it's being used as a psychological weapon to undermine one of the competitors. That's exactly what Amy Irving's piano coach (Lee Remick) thinks the dastardly Dreyfuss is trying to do.

There are three areas that the movie gets into, superficially but earnestly. One has to do with the competition itself with the idea of artists competing with one another. Another has to do with relationships between men and women: Will the love affair between Amy and Richard be destroyed if she should win? How will his fragile male ego be able to take that? The third has to do with the idea of the artist's career, and here Remick has several good scenes and intelligently written speeches, as she tries to explain the realities of a concert career to Irving.

There is, of course, a lot of music in this movie, in addition to all the scenes of romance, backstage butterflies, international intrigue, and self-examination. And The Competition does an extraordinary job of persuading us that the actors are really playing their own pianos. They're not. Stay for the credits if you want the names of the real pianists on the sound track. But Dreyfuss, Irving, and the rest really look as if they're playing, and it took them four months of daily rehearsal to learn to fake it so well.

The Competition isn't a great movie, but it's a warm, entertaining one. It has the nerve to tell a story about serious, interesting, complicated people, who are full of surprises, because Joel Oliansky, the writer-director, has thought about them and cared enough about them to let their personalities lead him down unexpected avenues. There's only one major lapse: the inclusion, after two hours of great piano compositions, of Lalo Schifrin's dreadful song, "People Alone," sung by Randy Crawford over the end titles as if none of those great composers should be allowed to rest in peace. 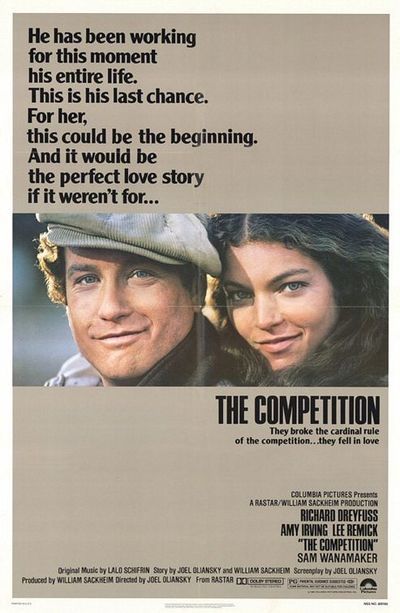