There are few moments of calm in a movie like Feras Fayyad’s follow-up documentary to “Last Men in Aleppo,” “The Cave.” Throughout Eastern Ghouta, near Damascus, a spidery web of tunnels and escape passage give evacuees claustrophobically close but safe quarters. It’s the last chance for survival for many driven under the buildings they once knew as homes, neighborhoods, schools and markets by relentless bombings by their country’s military and outside forces. There is an eerie calm in these tunnels because there is nowhere else left to run. “Is God really watching?” the hospital manager asks as she shakes her head.

The Cave, a last resort hospital staffed by dogged professionals, operates in this vast underground network. Here, Fayyad’s documentary switches focus from the tunnels to this hospital—possibly out of concerns for those hiding underground or as a way to show just how bleak things have gotten for the region from 2016-2018. The Cave, which gives this film its title, is like a lighthouse for those in need above and below the city’s war-torn surface, even as the hospital’s supplies and staff dwindle and the city’s survivors face endless threats from airstrikes and starvation.

Even in the darkest of moments, The Cave’s staff stay resolute and do their best to improvise surgeries without anesthesia or come up with enough food for the entire staff. Cutting through the chaos is a determined young pediatrician, Dr. Amani Ballour, who stayed behind to manage the hospital. She does this with a calm demeanor even when sexist men berate her for not staying at home to be a mother. With the help of a male colleague, she swats their close-minded remarks away. She’s got real problems to solve.

The movie could spend so much more time with Dr. Ballour, and it still wouldn’t do her justice. In addition to creating a space for herself and earning the trust of the male staff, she also actively hires and recruits women like Samaher, a nurse who seems to help with everything from surgeries to cooking the staff meals out of limited rations. Samaher is the boisterous opposite to Dr. Ballour, and although they don’t always share scenes together, it’s clear that these women are the backbone of this facility, making space for the wounded where there is none and looking out for the needs of everyone on their team.

These warm scenes between Dr. Ballour and her colleagues, like the few other moments of calm, are rare but effective. So much of “The Cave” focuses on the daily chaos these healthcare professionals contend with, the scope of which can feel overwhelming long before you see the worst of what they face. The injuries coming into the hospital become progressively worse as the bombings inch closer to The Cave.

On some days, there looks to be more dead patients than live ones. In one gut-wrenching shot, a mother cries over the lifeless body of her son asking him why did he break her heart. Eventually, the doctors’ stoicism melts into tears over the nonstop carnage. A bold orchestral score ramps up the tension in some of the scenes, but it’s almost overkill. What the camera captures is terrible enough, especially when the documentary reaches a stomach-churning apex when it records the horror of chemical warfare, a war crime in progress and possibly on its way to contaminate the hospital. The movie needs tender moments of Dr. Ballour calming a little girl’s fears by braiding her hair or the women of the hospital having fun together just as much as it does its more somber moments.

As with the “Last Men in Aleppo,” Fayyad looks to a group of selfless heroes to tell the story of Syria that doesn’t always make international news. They are part of a portrait of many, just one example of resilience in the face of impossible odds. But they are also a testament that refutes the Syrian government’s official story that waved off allegations of chemical weapons and their allegations that the so-called rebels they were after were a threat. Here, we see the many faces of the women who are fighting to keep one more child from dying from the conflict.

It’s quite probable that “The Cave” may leave you feeling helpless after watching it. It’s a feeling shared by many of those living it then and now. Beyond the human need to hear and see these stories, it’s a beautifully shot documentary that’s as stunning as the images are harrowing. In a sea of so much tragedy, it’s a marvel to stop and consider each individual’s experience fighting the tide. 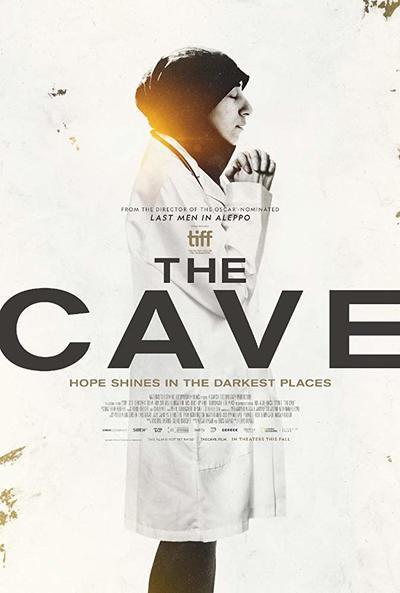