The Boy Behind the Door

The premise alone is terrifying: Two 12-year-old boys get abducted in broad daylight, tied up and taken to a creepy, remote house. If you’re a boy mom—as I am, of a son around the same age—that may just be enough for you, and you won’t to know any more about “The Boy Behind the Door.”

But the debut feature from the writing-directing duo of David Charbonier and Justin Powell is so skillful, precise and well-acted that you’ll want to give the film a chance and stick with it, even through some deeply uncomfortable moments. And there are quite a few of them. Charbonier and Powell accomplish a lot with a little, making the most of their low budget and single location and exploring every square foot of it for maximum tension. They establish a foreboding mood early, and efficiently tell us just enough about these kids and their friendship to make the way they fight for each other feel not just believable but substantial.

In a flashback to six hours before the kidnapping, Bobby (Lonnie Chavis of “The Water Man”) and Kevin (Ezra Dewey, star of the filmmakers’ follow-up “The Djinn”) reveal an easy, playful rapport as they walk to their baseball game in matching green-and-white uniforms. They toss a ball back and forth and dream of fleeing their small town to visit California, promising they’ll be “friends to the end,” and it’s the kind of intense bond best pals share when they’re tweens, before puberty hits and girls become a distraction.

This is all we know about them, but it’s enough. Because once they find themselves in danger, their loyalty to each other is what sees them through. At first, we don’t see who has taken them—we just see Kevin being lifted from the trunk of a car, and Bobby being left behind to kick and scream through the duct tape covering his mouth. Clever kid that he is, though, Bobby finds a way to break free and run to safety—only to hear Kevin’s screams echoing from a giant brick house on the hill behind him. Time seems to have stood still in this place with its black-and-white TV set and rotary phone, a couple of lonely pumpjacks groaning outside providing the only noise or movement for miles. (A “Make America Great Again” sticker on the back of a beat-up car is vaguely amusing but seems gratuitous, and it shakes us from the film’s foggy mood.)

The bulk of “The Boy Behind the Door” finds Bobby sneaking inside and—literally, quite frequently—hiding behind one door or another as he skulks about, trying to find his friend while outwitting his captors. As day turns to night and the creaky house grows darker, the directors and cinematographer Julian Estrada use dramatic streaks of light to illuminate ominous hallways and cramped quarters. They also use silence effectively, prompting us to hold our breath just like the kids to avoid being found. Chavis and Dewey are called upon to do so much that’s physically and emotionally challenging—and they often must do it alone, because they’re separated for most of the film—which makes their performances even more impressive. These are clearly strong, smart kids but they’re also sensitive and sweet, and they take logical, reasonable steps in their efforts to escape. This isn’t one of those maddening horror movies in which the characters make needlessly dumb choices to put themselves further in harm’s way.

And yet, for every bit of progress Bobby and Kevin make, there’s a setback, resulting in a roller coaster of hope and frustration. Charbonier and Powell place the boys’ abduction within a larger context that’s deeply depraved and disturbing, yet they find a suitable thematic balance that avoids any sense of exploitation. (They do, however, steal one of the most famous images ever from one of the greatest horror movies ever in a scene involving an axe and a bathroom door.) And while “The Boy Behind the Door” runs out of steam a bit in the third act, it’s mostly a tight, well-paced thriller with terrific central performances from a couple of young actors with bright futures ahead of them—once they get out of here, that is. 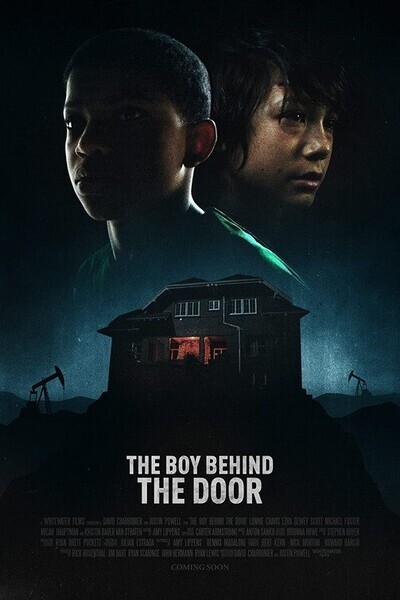 Micah A. Hauptman as The Creep