"The Boston Strangler" requires a judgment not only on the quality of the film (very good), but also on its moral and ethical implications.

There have been lots of movies about murders, but very few about real murders, using real names, while they are still a daily memory for the living.

The problem here is that real events are being offered as entertainment. A strangler murdered 13 women and now we are asked to take our dates to the Saturday night flick to see why. Gerold Frank's original book was written with the most honorable intentions, I believe, but the movie is something else: A deliberate exploitation of the tragedy of Albert DeSalvo and his victims.

That the killings are being exploited there can be little doubt. Although the film's treatment of the murders is restrained and intelligent, it is being promoted in singularly bad taste. Outside the theater there's a door that flaps open and shut, while lurid photographs of the strangler's victims rotate inside.

What sort of person is attracted by this approach? I can't forget two young girls sitting near me in the theater. Near the film's end, Tony Curtis (as DeSalvo) has a long and difficult scene in which he pantomimes one of the murders. It is compelling, brutal and tragic. And these girls were laughing. They were having the times of their lives. My God. When you see something like this it forces you to rethink your whole approach to the movie.

It will be argued that the film is beneficial and even educational. I am not sure. We are told that Albert DeSalvo literally had a split personality: That most of the time he was a family man, absolutely unaware of his other identity as the strangler. Then what do we learn?

DeSalvo seems to have been one man in a million, a man with a rare psychological and medical history which made him, in a sense, irresponsible for his crimes. What do we learn, except that he was sick? Is our insight into crime -- and the social causes for it -- increased? Hardly. From this point of view, "In Cold Blood" was the worthier film because it dealt with conditions that could have been changed, lives that might have been saved.

If "The Boston Strangler" is not a public service -- all these "true" crime movies are publicized as noble and responsible undertakings -- then why should we praise it? It serves three other functions: as art, as entertainment and as a commercial venture. As entertainment, it's first-rate. Henry Fonda is a subtle, sensitive lawyer; George Kennedy makes a convincing cop, and Tony Curtis acts better than he has in a decade. There are some fascinating scenes of police work, some dirty words, some sex, some laughs, some suspense and a chase.

As art, the case is not quite so clear. The very things that make it an entertaining movie seem to mar its higher purpose. There is an unnecessarily bizarre scene with a sex deviate and a scene with an ESP practitioner which seems to have been directed as a vaudeville turn. The explanation of DeSalvo's behavior is handled at approximately the level of a Reader's Digest article.

That leaves the money, I guess. "The Boston Strangler" was a big best seller, and it appears that all best sellers get sold to the movies these days, even ones like "Sex and the Single Girl" which don't have stories or characters, only marketable titles.

That seems to have happened here, by the way. The events described in Frank's book have been altered considerably in the film. This is essentially a work of fiction "based" on the real events. And based on them in such a way to entertain us, which it does, but for the wrong reasons, I believe. This film, which was made so well, should not have been made at all. 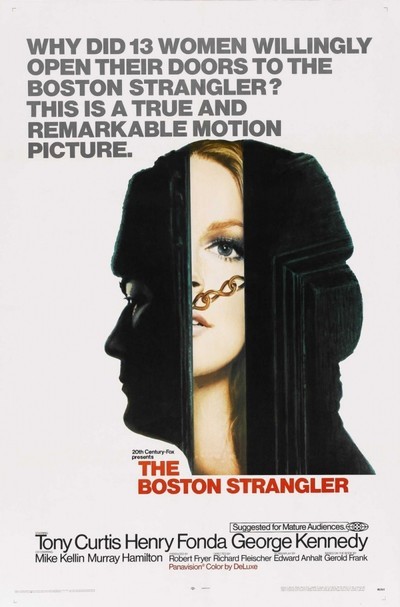