"The Black Marble" centers around several days in the life of a Los Angeles police sergeant named Valnikov (Robert Foxworth), an incurably romantic Russian who has been drinking too much since his partner's suicide. He gets a new partner, Sgt. Natalie Zimmerman, played by Paula Prentiss as a combination of Sally Kellerman and Lucille Ball. His new partner thinks Valnikov is insane. Maybe she's right.

The case they begin working on together involves a prize bitch that has been kidnapped and is being held for $85,000 ransom. Valnikov goes to interview the kidnapped dog's grieving owner, an attractive woman of a certain age. And, in a delightful scene that illustrates the movie's gift of being able to slide ever so lightly from drama into cheerful comedy, he winds up on the sofa with the woman, drying her tears and vowing, "Don't worry; I promise I'll get your doggie back."

The dry tone Foxworth brings to the pronunciation of such lines is one of the movie's charms. He is mustachioed, mournful-eyed, usually hung over, and filled with ancient Russian dreams and curses. It is inevitable, of course, that he and the sexy Zimmerman fall in love, and they have a wonderful seduction scene in his apartment. He puts sweepingly romantic Russian folk music on his stereo. They dance. "Translate the lyrics for me!" she whispers into his ear. He does. It does not bother either of them that there are no lyrics since the song is instrumental.

Meanwhile, a parallel plot involves the evil dog kidnapper, played by that uniquely malevolent character actor Harry Dean Stanton, who looks and talks like Robert Mitchum's mean kid brother. Stanton is a veterinarian who has never hurt a dog in his life. But he needs the ransom to pay a gambling debt before he is killed. Coughing, wheezing, and spitting through an endless chain of cigarettes, he makes telephone threats to the dog's owner, who counters with descriptions of her own financial plight, unpaid bills, and tax problems.

When Valnikov and the kidnapper finally meet face to face, they get into what is undoubtedly the most painful chase sequence I can remember, a chase that requires them to climb mesh fences separating a series of savage and terrified dogs that snap maniacally at their legs. The chase is another scene illustrating the curious way in which “The Black Marble” succeeds in being funny, painful, and romantic, sometimes simultaneously.

The movie's not altogether a comedy, although we laugh; it's a love story that kids itself and ends up seriously; it contains violence but is not really violent. What it always does is keep us off balance. Because we can't anticipate what's going to happen next, the movie has a persistent interior life; there's never the sense that a scene is included because it's expected.

The performances go to show you that a good actor in a bad film can have a very hard time appearing to be any good. Foxworth's previous screen credits include “The Omen,” “Part II” and “Prophecy.” Neither film gave me the slightest reason to look forward to him in “The Black Marble,” but he's wonderful here. He gives his character weariness and craziness and then covers them both with warmth. He and Prentiss have so much fun with the long seduction scene that we can sense the joy of acting craftsmanship going into it.

The movie's the second production by Joseph Wambaugh, the L.A. cop who became a best-selling novelist only to see Hollywood doing terrible things to his novels. Wambaugh vowed to produce his own books. The industry had its doubts, especially when Wambaugh hired a little-known British director, Harold Becker, to direct his first project, "The Onion Field." But that was a strong, edgy, effective movie, and now Wambaugh and Becker are back with this unusual and distinctive comedy. Because it is uneven and moves so easily among its various tones and moods, it's possible, I suppose, to fault it on form: This isn't a seamless piece of work, but it's infectious and charming. 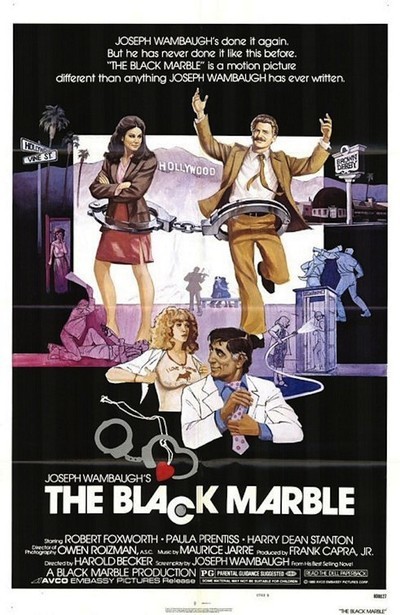