Indonesian director Timo Tjahjanto makes movies that embrace the absurd potential of filmmaking. I remember being a kid and hearing someone say that the best action movies show you something you've never seen before and you're not sure is even possible. Tjahjanto believes in a chaotic, comedic approach to action filmmaking, which reached its career peak for him in the riveting "The Night Comes for Us," a big enough hit for Netflix that they asked the madman to make another action extravaganza and he delivered "The Big 4," a shoot-'em-up with its director's unmistakable flair for the ridiculous. Critics have often compared well-choreographed action in films like "The Killer" or "John Wick" to ballet, films where every movement feels precisely considered for the best impact. Tjahjanto's films have a more reckless energy to them. Even though they're just as carefully considered, they maintain something closer to slapstick. It's like The Three Stooges with bazookas. "The Big 4" is way too long and talky, but you feel its impact when it explodes.

"The Big 4" opens with one of its best scenes as Tjahjanto reminds us of his horror background by dropping viewers into an orphanage used to harvest organs for rich people. It turns out that the heroes of this tale are already undercover in this grotesque establishment, and they destroy all of its employees in an increasingly grotesque fashion. A sniper's bullet doesn't just drop an enemy in a Tjahjanto film—it blows half his head off.

During the sequence, we meet the quartet of vigilante assassins that give the film its title: leader Topan (Abimana Aryasatya), the intense Alpha (Lutesha), marksman Jenggo (Arie Kriting), and the youngest Pelor (Kristo Immanuel). These angels have a Charlie in Petrus (Budi Ros), who decides it's time to retire from the team as his daughter Dina (the excellent Putri Marino) is retiring from the police academy. It's hard to lead a group of people who operate outside the law when your offspring is now the law. But Petrus can't enjoy his retirement and is murdered in what is basically the film's prologue, sending his four assassins to a remote island. Three years later, Dina tracks them down, and so does the killer of her father (Martino Lio), who now has a whole team to enact his vengeful will.

"The Big 4" is at its best when it's at its most ludicrous, whether it's the striking opening showdown or a wonderful later scene in which Topan has to ward off a pair of villains behind a door without revealing the violence to Dina. Lio leans into his villain role with fantastic facial hair, a silly number of knives sheathed on his body, and a fashion sense that seems built around his snarl. Most people who watch "The Big 4" will be drawn to its cartoonish action, but the cast is solid from top to bottom, especially Lio, Marino, and Aryasatya.

I'll admit to caring less and less about the plot of "The Big 4," which makes its 141-minute runtime a bit much. But all is forgiven when it finally takes off, which it does with enough rhythm to get you from the intense prologue to the insane final half-hour, during which Tjahjanto pulls out all the stops. He's reportedly hoping that this will be the start of a franchise. It's hard to imagine how the sequel could go bigger, but I bet he'll find a way. 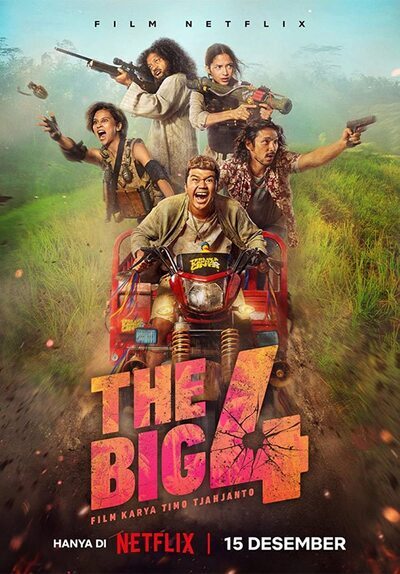