The Best of Enemies

Our site’s beloved founder, Roger Ebert was fond of saying that it’s not what a movie is about, but how it’s about it. “The Best of Enemies” is about outspoken Black activist Ann Atwater (Taraji P. Henson) clashing over school integration with C.P. Ellis (Sam Rockwell), the Exalted Cyclops of the North Carolina Branch of the Ku Klux Klan. The duo co-chaired a charrette where the resulting majority vote would determine the fate of East Durham’s Black students who’d been displaced by a school fire. Though there was no love lost between them, Atwater and Ellis eventually became lifelong friends. For those of you still smarting from that racist police officer’s presumed redemption in “Three Billboards Outside Ebbing, Missouri,” this movie has receipts for its Rockwell character’s redemption: Not only do we see the real Atwater and Ellis together during the closing credits, we’re told that Atwater gave the eulogy at Ellis’ funeral.

This, dear readers, is what “The Best of Enemies” is about, and I have no problems with that. Truth is sometimes stranger than fiction. My issues all stem from how this movie is about that story. Director Robin Bissell’s script has more sympathy for, and pays more attention to, the Klansman than the Black children whose future may be forever damaged by the outcome of the charrette. Despite having an equal share in the story, Ann Atwater is pushed into the background, sometimes disappearing from the film for stretches at a time. When she’s on screen, she’s either inexplicably doing saintly things for her adversary or scowling at the camera. I had to think long and hard before I recalled a scene where Bissell’s camera wasn’t fixated on the angry face of Taraji P. Henson. C.P. Ellis gets to express all sorts of emotions that supposedly represent conflict and humanity; all Ann Atwater gets to do is fit the stereotypical role of “pissed off sistah.” Even the movie itself mocks her righteous anger, with White guys implying onscreen that she has PMS.

This movie isn’t just tone-deaf, it’s ass-backwards. Did the filmmakers read the room before dropping this insulting malarkey into theaters? Or maybe they read the room just right, considering that the repugnant “Green Book” just won Best Picture. Regardless, I cannot believe that, in 2019, I have to review a movie where my latest White savior is the same guy who’d put a noose on my neck and hang me from the nearest tree. Yes, in real life Ellis did see the error of his ways and change. But it damn sure didn’t happen the way this film presents it. In fact, Ellis’ big, stand-up-and-cheer Klan membership card-tearing speech makes absolutely no sense in the context of this narrative.

And make no mistake, “The Best of Enemies” is a White savior narrative. We learn more about Ellis’ family, his Klan buddies and his gas station than we do about Atwater’s daughter, the displaced students or any other Black character besides Bill Reddick (Babou Ceesay), the guy overseeing the charrette. We spend more time in the racist dive bar where the Klan makes small talk than we do in the still-smoldering school where the Black children must take classes despite the smoke. More cinematic effort is spent mourning the loss of 650 gallons of gas at Ellis’ place of employment than the subpar conditions the East Durham citizens must contend with because their landlords and politicians are in cahoots with Ellis’ crew.

The way Bissell treats Ellis’ role in the KKK is suspect. Granted, Ellis and his brethren spit racial slurs and don’t want to mix the races, but the two violent acts the Klan commits are both against White women. One of the victims is a reputed “nigra lover” whose house is shot up in fetishistic slow motion (making sure not to hit her with any bullets, mind you). Ellis is a willing participant there. But he’s not present at the second instance. In that, the other woman is threatened with rape and murder unless she votes against integration. Ellis’ cronies force her to utter racial slurs as they sexually molest her, and as a result, she votes against her wishes. Ellis is also not present when his cronies threaten a Vietnam vet whose store hires only Blacks, including a fellow vet who manages the store. That Ellis’ hands are only dirtied one time is by design.

Meanwhile, grumpy old Ann Atwater is yelling at everyone in power so she can be heard, going so far as to lay hands on the worst offenders. (This isn’t fabricated—the real Atwater was known for this and Henson plays the hell out of these scenes.) But this is all we really learn about her. She’s an enigma in her own story. When Ellis’ institutionalized son needs a private room so that he can function better, Atwater inexplicably makes a deal with a Black nurse she knows at the hospital. Why did she do this? Well, in researching this story, I read a quote from Ms. Atwater where she described her activist model as giving someone what they want and then telling them what she wanted in return. Wouldn’t it have been lovely to see that philosophy in action? “The Best of Enemies” doesn’t think so.

Henson gives her all despite her anemic part, but she’s not the only actress left stranded. Poor Anne Heche has a thankless role as Ellis’ voice-of-reason wife. Like Linda Cardellini in “Green Book” she tsk-tsks her racist-ass husband’s actions like a cinematic Edith Bunker. Unlike Cardellini, she actually gets to leave the house, meeting with Atwater in the one scene where Henson is allowed to be playful and add shading to her character. Of course, some Klansmen just happen to be driving by Atwater’s house at the same time Mrs. Ellis is exiting Atwater’s house. Oh boy, they are NOT happy about that!

“The Best of Enemies” has no excuse for the way it is made. At 135 minutes, there was plenty of time to flesh out the Black side of this story, yet the filmmakers didn’t think you wanted to see that. The filmmakers do, however, think you’ll get a kick out of the absurd needle drops they employ. I expected the standard “hmm-HMMMMMM!” gospel style humming on the soundtrack—that always signifies Black suffering in these movies! But I didn’t expect that humming to come from Bill Withers nor Donovan’s “Hurdy Gurdy Man.” And someone much wiser than I will have to explain why “Queen Bitch” filled the speakers at one point.

“Bullshit!” I wrote in huge letters in my notebook. I was being too kind. I learned more from reading Ann Atwater’s Wikipedia page than I did from this reprehensible movie. I also watched footage of Ellis and Atwater on YouTube; these clips proved fascinating and enlightening and I highly recommend you seek them out. 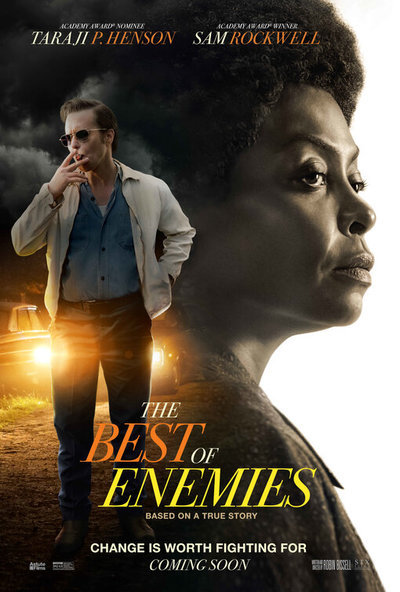 Rated PG-13 for thematic material, racial epithets, some violence and a suggestive reference.