The Bay of Silence

“What did the dead infant have to do with any of this?” I wrote that question in my notepad at the end of “The Bay of Silence,” an uninvolving, confusing thriller starring former Bond girl and “To the Wonder” twirler Olga Kurylenko, “The Square”’s Claes Bang and the usually reliable (but not this time) Brian Cox. This movie begins, and ends, at the Bay of Silence in Italy, so at least the title makes sense. What’s between those two scenes is a wretched rat’s nest of a plot involving mental illness, sleazy photographers, wrongfully imprisoned French boys, the rape of a 14-year-old girl (and the resulting pictures) and the aforementioned deceased little boy Amadeo, whose twin sisters at one point roll his corpse around the French countryside in a baby carriage full of trash. I suppose director Paula van der Oest was trying to go for some kind of European Gothic feel, but something this unsavory needs to move a lot faster than this. This contraption is slower than molasses in winter.

Kurylenko plays Rosalind, a French beauty in love with Bang’s Will. After some outdoor rumpy-pumpy, Will proposes to Rosalind. Fast-forward eight months, we discover not only a pregnant Rosalind but her twin daughters as well. We’re also introduced to Milton (Cox), a shady looking maid of Eastern European descent and later, Candy (Shalisha James-Davis), the nanny who will take care of baby Amadeo after he’s born prematurely. Amadeo’s early arrival occurs after Rosalind suffers an accidental fall from a balcony. In the hospital, Rosalind is convinced that her Caesarian resulted in two babies, one of whom died or had been taken away. “Why did you let them take my baby?” she accuses Will as mysterious, “something sinister is afoot” music plays.

Will assures her that there was only Amadeo, something you would think Rosalind would know based on her obstetrician visits. She is so adamant about this that the viewer starts thinking Will is up to no good. It’s the first of many times Caroline Goodall’s adaptation of Lisa St Aubin de Terán's book sends us down a path that is either beyond unsatisfying or doesn’t even makes sense. Next, we catch Rosalind peeling paint off the walls like a pissed off cat. She’s looking for the missing twin. Will reassures her there’s only one baby and that she’s been sleepwalking, but she’s clearly awake. Perhaps Rosalind has some sort of mental health issue, or maybe it’s just postpartum depression. We don’t get much time to think about this, because Rosalind runs off with the kids while Will is on a business trip. He comes back to a sign that reads LIAR in gigantic letters.

Rosalind’s disappearance may have something to do with the mysterious suitcase she received from Normandy. Believe it or not, this item has something to do with the plot! Inside are photographs supposedly taken by a famous photographer named J.B. Raven. Raven took a famous picture of Rosalind when she was 14, one that hangs on Milton’s wall. Milton is a collector whose items include numerous pictures, statues, and a massive gun cabinet. Will inquires about the guns as the camera provides a close-up of them that would make Chekhov chuckle; this won’t be the last time we see one of those pistols.

But I digress. Will tracks Rosalind back to France where he finds her daughters and that unfortunate, trash-filled baby carriage. Since the promotional materials for “The Bay of Silence” pitch it as a mystery of whether Rosalind murdered her son, it’s no spoiler to state that Amadeo’s lifeless body is in that carriage. Rather than call the police or a hospital, especially since Rosalind is in a state of mental distress that renders her incapable of explaining what happened, Will buries his son and burns the evidence. This is when I turned the movie off, because this was an infuriatingly stupid application of Roger’s Idiot Plot Theory.

Professional masochism forced me to resume watching, only to find more sinister things occurring. Bearded mystery men roam around outside the decrepit house where Will finds his wife; Rosalind’s parents dole out information in chunks small enough for you think they’re hiding something; Will squirms in agony because he doesn’t know the cause of Amadeo’s death, an answer that could have possibly been answered had he not put him in a pauper’s grave. Meanwhile, Rosalind conveniently has no memory of what happened or even why she went back to France.

I keep bringing up Amadeo because I want you to feel as mad as I was when I discovered (spoiler alert!!!) that he is completely extraneous to the plot. The real mystery of “The Bay of Silence” is in that suitcase from Normandy. That whole business takes up the last half hour of the movie when it should have been taking up the entire movie. Even as I write this, I have no answer for my opening question except that it was one of many tasteless ways to kill time before we got to the equally nasty main story. Being jerked around by a thriller can be fun, but there are more red herrings in this movie than there are fish in the sea. They all stink. 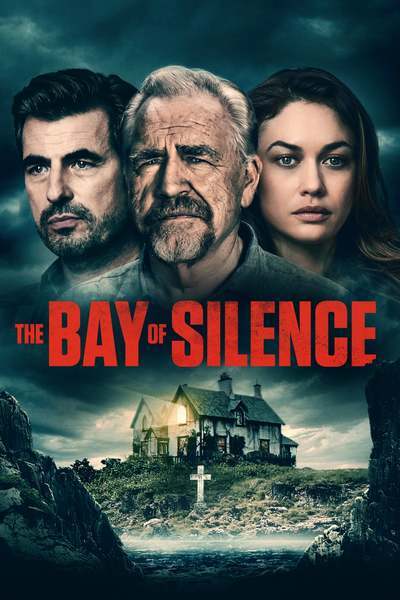 Claes Bang as Will