There's a scene in the original "Cat People" (1942) where a woman goes swimming at an indoor pool after hours. The stairwell is lit, and she senses something scary approaching. An ominous growl rips through the silence. She leaps into the pool for escape. Director Jacques Tourneur shows us the wavery reflections on the ceilings, the walls, and then cuts back to the woman in the pool, and it one of the most terrifying sequences in cinema and you don't see anything. First-time writer/director Blair Erickson's "The Banshee Chapter" pulls off a similar trick: the film is filled with inky-black shadows pierced by the dim blue glare of flashlights, and shadowy cavernous spaces overwhelming in their sense of menace, and the fear really lies in what is not seen. Like "Cat People", "The Banshee Chapter" is both elegant and terrifying.

"The Banshee Chapter" starts out documentary-style, with words on the screen informing us of the secret CIA program from the 1950s and 1960s codenamed Project MKUltra, which involved chemists and doctors injecting hallucinogenic drugs into people in order to study the results. MKUltra was officially sanctioned in 1953 and halted twenty years later. Records of this program are hard to come by (in the wake of the Watergate scandal, CIA director Richard Helms ordered all MKUltra files destroyed), although there were Senate hearings on the topic in 1977, led by Ted Kennedy. One of the goals listed on a surviving MKUltra document was to give people "substances which will promote illogical thinking and impulsiveness to the point where the recipient would be discredited in public" or, even more comforting, "materials which will cause temporary/permanent brain damage and loss of memory." Paranoia was obviously at an all-time cultural high point during the years of MKUltra, and the project is still swathed in secrecy and conspiracy theory. "The Banshee Chapter" shows us some of the Senate hearings, as well as grainy interview footage with one of the doctors who appeared to not have considered the moral implications of what he was doing.

After the compelling and creepy beginning, there is a somewhat awkward segue into the nuts-and-bolts of the story. We meet a budding investigative journalist named Anna (Katia Winter) who wants to find out what happened to her college buddy James (Michael McMillian). James is shown in "found" video footage, about to take a mind-altering drug, the same one used in MKUltra, as research for a chapter in a book he is writing. His friend holds the camera, and we watch James drink down the bright blue liquid and wait to see what will happen. James quickly becomes freaked out, saying that something "is coming", the found footage goes to alarming static, and when the event is over (which we never see in its entirety), James has vanished off the face of the earth. And the friend is now being held for questioning in the police station.

Where did James go? Is he alive? What was he referring to when he said "something was coming"? And what exactly was that blue liquid? Anna's investigation leads her deeper and deeper into the complicated sub-culture of American conspiracy theorists and abandoned desert compounds where the government did bad bad stuff once upon a time, as well as "numbers stations", strange shortwave radio stations that broadcast indecipherable stuff, static and beeps and also, on occasion, a female childlike voice intoning weird chants. And while the word "banshee" is never actually said in the film, that's what seems to be coming out of the numbers stations, the voices of those mythical creatures who wail when someone is about to die.

Anna looks through James' notes for his book and comes across all of this information about Project MKUltra. She also finds a letter to James, providing him with the mysterious blue liquid, and it is signed only, "Your friends in Colorado." A colleague of Anna's recognizes that as a book title by a notorious wild-man writer named Thomas Blackburn (played by Ted Levine, in a really fun performance). Blackburn is clearly modeled on Hunter S. Thompson, although there is some Ken Kesey and Timothy Leary thrown in there too. Blackburn wrote about hallucinogenic drugs in the '60s and was constantly behaving in violent and crazy ways, shooting his assistants and getting thrown out of parties. Anna wonders if this now reclusive author knows anything about Project MKUltra and James, so she tracks him down to a seedy bar in the middle of the desert.

The two of them join forces. Yes, Thomas Blackburn was the "friend in Colorado" who sent the nice young writer a sample of the blue stuff. No, he never met James. No, he doesn't know where he is. Thomas Blackburn lives in a house filled with skulls and American flags and the spines of animals hanging from the ceiling. Thomas, Anna, and Thomas' friend Callie (Jenny Gabrielle) decide to take the blue liquid themselves, to see if they can understand what happens to those who ingest it. Some of the action that follows was almost unbearably scary, mainly because it mostly takes place in pitch-blackness with only glimpses of what is going on.

"The Banshee Chapter" works slowly, takes its time, behaving as a typical "whodunit" at first, with our fearless heroine squinting at computer screens and leafing through clues. Katia Winter, familiar to television audiences for her work in "Sleepy Hollow" and "Dexter", is a wonderfully intelligent presence, thoughtful and worried, complex and cunning. Events start to spiral, and Thomas and Anna are deeper and deeper into the maze, with that terrifying "something", the "something" that everyone who took that blue drug seemed to encounter, on their trail.

Structurally, the film is a bit of a mess. The cinematic point of view is unclear. It feels like a fake documentary at times, with a roaming floating camera going from face to face, but then there are also clear establishing shots that take a more omniscient point of view. There's one scene where Anna goes out into the desert by herself to try to pick up one of those creepy "numbers stations" on the shortwave radio, and at times we see her speaking into her own video camera, but that format is abandoned to also give us medium shots of her at the wheel of the car. So it's a bit confused, and Erickson can't seem to decide which way he wants to go from scene to scene.

But that really becomes irrelevant because the film works its magic, its dark and awful magic, so that when we get to the final scene that takes place in the abandoned installation that was once the headquarters of Project MKUltra, we are wiped out, we are wrung dry from the high-pitched terror keening through the entire picture. The shadows are so black, the flashlight beams so dim and fragile, and nobody, nobody can see for sure what is really out there. 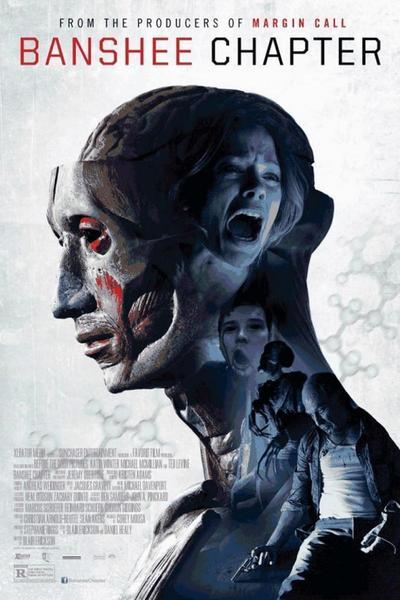