“The Aviary” tells the story of two women who escape from Starlight, a cult in New Mexico ruled by a salt-and-pepper bearded leader named Seth (Chris Messina). We join Jillian (Malin Akerman) and Blair (Lorenza Izzo) mid-flight, navigating the brutal desert terrain using a rinky-dink map and the Sun to guide them to safety Gallup. Jillian mentions that she earned her survival and navigation skills in the Girl Scouts. She then asks Blair if that organization qualified as a cult. If they are, they’re far scarier than Starlight. Plus, you can get some damn good cookies to go with your brainwashing.

But I digress. Instead of Thin Mints, this duo has a rapidly dwindling supply of protein bars and bottled water. They’re also going in the wrong direction, something they will do more than once as writer-directors Chris Cullari and Jennifer Raite try to wring suspense and mystery out of their flimsy plot. Since this is a thriller, we are treated to numerous nonsensical jump scares and the nagging question of whether we can trust either woman or our own eyes. Both characters experience hallucinations where Seth shows up to play word association games or to speak to them in soothing tones that are supposed to be sinister. The problem is that Seth doesn’t evoke Jim Jones or any other terrifying cult leader; he looks like that Philosophy professor you had in undergrad whose clothes smelled like a Cheech and Chong concert.

“I did NOT join a cult,” Blair growls at Jillian when she refers to Starlight as one. Truth be told, Jillian convinced her to sign up. While Seth took a sexual interest in Blair, Jillian’s desire to be the “number two” member overrode any inclination to allow herself to be seduced. There was a prior person in that position, Delilah (Sandrine Holt, rounding out the four-person cast), but her decision to go public with an exposé on Starlight led to her mysterious disappearance. Picking up where Delilah left off, Blair has stolen Seth’s laptop full of incriminating evidence. Seems the guy liked recording all his “therapy” sessions.

All this exposition is delivered in the film’s early scenes, and Akerman and Izzo keep our interest due to their on-screen chemistry and their easy way with conversation. “The Aviary” experiences a drop in quality during its attempts to goose the audience, but its two lead performances remain consistent. Izzo is very good at capturing Blair’s nervous panic while Akerman runs an undercurrent of vulnerability under Jillian’s demanding demeanor. When they both start descending into madness, we almost believe them.

I can’t think of too many movies that take place in New Mexico, so the locale was a welcome change even if its desert looked generic. There are some treacherous passes the protagonists need to traverse, along with cliffs and jagged rock formations. Throughout the journey, Jillian and Blair become less and less trusting of each other while they both experience strange flashbacks of their time at Starlight. Occasionally, the desert sands are littered with corpses with their heads bashed in, or arterial spray resulting from a really gnarly knife wound. Are these merely figments of the characters’ imaginations?

Nowadays, with certain politicians and 30% of the population parroting conspiracy theories and worse, the idea of someone joining a cult feels de rigueur. Cullari and Raite want to say something about how the basic human desire to belong can lead to dark and dangerous destination. Blair even explicitly mentions a need to belong as her reason for signing up at Starlight. Unfortunately, we learn very little about what goes on there. Seth’s scenes look like standard issue shrink visits and the few terrifying details are told to us without commentary.

Because this is a thriller, there has to be some kind of twist at the end (or close enough to it). Of course, I can’t tell you what it is, but I will say you’ll be able to figure it out early, as it’s the only way “The Aviary” can make any sense. As for that title, I assume it’s implying that Blair and Jillian are the birds who escaped from what the dictionary defines as “a large cage, building, or enclosure for keeping birds in.” There are no birds in this picture, though a couple of vultures shadowing our protagonists would have been appropriate. 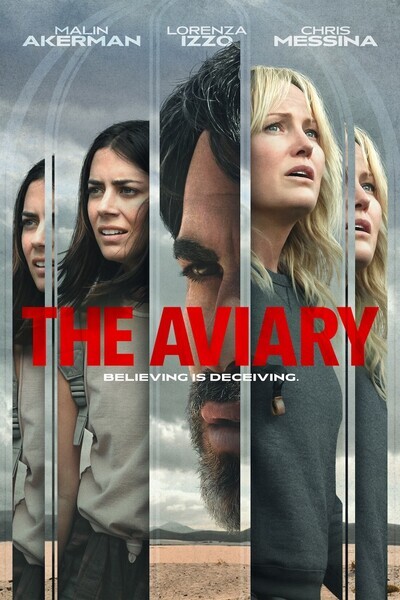