"The Attack" is the best kind of anti-war propaganda film, calm in feeling and mood, yet truly terrifying in showing the scourge of our age: terrorism, which can strike anybody, anywhere, at any time. It's also a love story, and a film about having it all. And then in an instant, losing everything.

The film builds slowly, yet never seems draggy or overlong. Unlike movies that wash over you, "The Attack" insists that you look and listen. It's a movie for grown-ups; people who can go along with the hero's trip from being a happily married, benevolent, highly accomplished and admired surgeon to losing his wife, and realizing she had a whole other, secret life. And his career takes a few hits too.

"The Attack" opens with Amin Jaafari (Ali Suliman) accepting a prestigious career achievement award. As he says in his gracious speech, he's the first Arab to be so recognized in 41 years (a date which happens to coincide with the beginning of terrorist activities against Israel). Having reached the top of his field, with the respect and admiration of his mainly Israeli peers and friends, he seems to perfectly represent, and speaks of, the possibilities of a peaceful co-existence.

But the very next day a suicide bombing rocks Tel Aviv and the body of Amin's wife, Siham (Reymonde Amsellem) is brought into Amin's hospital, her corpse mangled in a way that indicates she was the bomber. After a period of denial, and brutal interrogation by the Israeli police, Amin travels to Nablus, the Palestinian territory in the West Bank, where Siham was headed, to trace her steps and figure out her motivations. We are as mystified and horrified as the hero, and learn her reasons, bit by bit, through Amin's eyes.

Flashbacks, in just the right amount, fill in the story of their love, and romance, a somewhat unexpected aspect in a thriller about terrorism. A stand-out image shows the couple on a motorcycle, with Siham in her wedding whites whipping along against the starkly beautiful Middle Eastern terrain.

Yet the Palestinian-Israeli conflict—or as it's called by those who are living with it, "the conflict"—lurks at the edge of everyone's lives. The two terrific documentaries on this topic which were nominated for an Academy Award last year—"The Gatekeepers," the retrospective thoughts of members of the Shin Bet or Israeli Secret Police; and "5 Broken Cameras," about a Palestinian photographer trying to capture the territorial struggles for land—come to mind. Yet this fiction film makes deeper emotional dents: the politics are very personal if we like the film's main characters. We do. Siham is especially intriguing, a sultry yet idealistic woman. That's a hard combo to enact.

Amin's own Palestinian relatives offer some reasons for Siham's chosen martyrdom; Karim Saleh is especially poignant as his nephew Adel, saying "Something snapped in her head," an ironic echo of the earlier analysis of terrorists by the savvy Israeli police. Another explanation comes from a young Muslim priest: "We are a ravaged people people fighting for our dignity with whatever we have." Amin has tracked him down to find someone, something, to blame. But as in the rest of "The Attack," there are no easy answers. "I never met your wife," the priest declares, "I wish I had."

It's fascinating to learn that female terrorists and bombers get the most media attention, and therefore are the most revered when they sacrifice themselves.

As Amin reconfigures step-by-step his wife's hidden other life, he changes. It's a character study tucked inside a thriller terror plot. But the film is not an apologia for terrorist acts, though Amin starts to question why he has ignored his roots, and perhaps been overly focused on his own success.

Nor is the Israeli angle skirted. When Amin's loyal friend and fellow doctor Kim (Evgenia Dodina) senses his new-found ambivalence, she accuses him of forgetting the Jewish community which took him in and gave him so much, also asking what possible good could come of killing young children. True, her speech, coming at the end of the film, is a sort of pro forma "summary of the Jewish position." (The restaurant scene where seventeen are killed, including eleven kids in party hats, is shot in dark tones, brief, and not too intense. That's reserved for the operating tables where Amin works: the very up close, clinically observed, post-bombing wounds and worse.)

"The Attack" is the kind of film that can only too easily get lost in the summer of comic book heroes and blockbuster wannabees, where it's spelled out for us just who to root for.

I had problems with some elements. One is the way that Amin, in most respects empathic, hangs his head and looks downward as his main way of showing grief. Another is the Israeli interrogation team; the actors seem too gung-ho, even the usually effective Uri Gaviel as Captain Moshe. There are so many bullet-headed bald Israelis that it's sometimes hard to separate their characters.

But these are minor kvetches. Lebanese director Doueiri, working as a writer here along with his wife, trained in the U.S., and was a cinematographer for Quentin Tarantino. Happily it's not so much the violence which comes through; it's the polished look, for instance showing the bustling city of Tel Aviv with its brightly lit nighttime grid of cars whooshing alongside the overwhelming poverty of the Palestinian neighborhoods. It's hard to think of a movie which as subtly, smartly presents various positions in a dispute, without coming down on any one side. 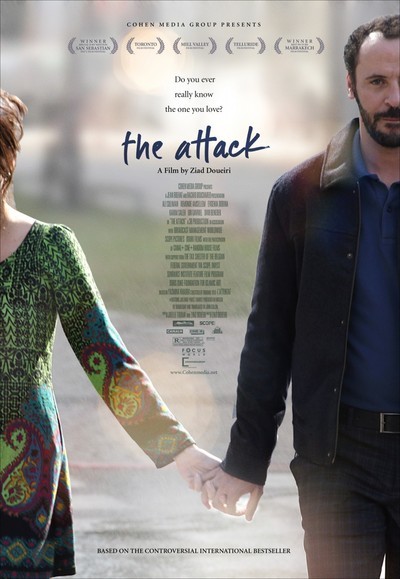