Any detective interviewing a crowd of witnesses knows that every individual will have a different story about what they saw. Can there even be such a thing as "the truth" when it comes to complicated human interactions? This is the concept of "The Argument," directed by Robert Schwartzman, with screenplay by Zac Stanford. What would happen if a group of people attempted a re-enactment of something they all experienced together? Who said what when? Whose memory is the correct one? There are some very funny bits here, but unfortunately the concept takes too long getting off the ground, leaving the first three-quarters of the movie floating in limbo, waiting for it to all make sense.

Jack (Dan Fogler) is a struggling screenwriter, with just one credit to his name, a "cerebral" zombie movie called "The Dead Doth Trod the Hills at Night." He has a love-hate relationship with his girlfriend Lisa's burgeoning acting career. Lisa (Emma Bell) just got the role of Mozart's wife Constance in a production called "Wolfgang" and Jack is proud of her success, but jealous of her flirty connection with her co-star Paul (Tyler James Williams). Jack invites his literary agent Brett (Danny Pudi) and Brett's humorless wife Sarah (Maggie Q) over to celebrate the opening of "Wolfgang." It's already awkward because both Maggie and Brett obviously did not care for the show. What's even more awkward is Lisa, unbeknownst to Jack, invited Paul. Paul surprises Lisa by bringing along his giddily ditzy girlfriend Trina (Cleopatra Coleman). Lisa and Paul are hyped up on their success. Jack seethes. Maggie is bored. Brett is irritated. Trina gets wasted. Jack and Lisa are both so upset over how the night went, they invite everyone back the next night, to re-create things and see where it all went wrong.

Night after night, the group attempts to re-create the original party. The conceit wears itself out almost instantly, since none of the characters seem particularly alive, nor is it clear why any of them are friends. Nothing important is at stake. The concept of "The Argument" doesn't kick in until the film is almost over, when Jack hires actors to come and "play" all of them in a script he has crafted based on the original night. All of the actors think this is a legitimate audition for a real project. They all take it very seriously. During the first read-through, they take on independent lives of their own, bringing eccentric interpretations to all we have just seen. This section is very clever and legitimately funny (I laughed out loud a couple of times). As the hired actors (Karan Brar, Charlotte McKinney, Nathan Stewart-Jarrett, Marielle Scott and Mark Ryder) read the script, the originals sit there and watch, arguing loudly with Jack's interpretation, or mocking Jack for his clearly biased spin. (Jack casts a hunk to play himself, for example.) This section sparks with controlled chaos. The movie goes off the rails, in the best sense. At one point, the actor playing Jack stops the scene and asks the real Jack, "I'm a little unclear. Is my character an idiot?" When Jack makes the fictional Paul declare, "What I care about most in my life are my abs and my glutes," the real Paul flips out at this mischaracterization.

The reality in the fake play is more real than the "reality" of the movie we just saw. Or something like that. Being this high-concept, this surreal, is difficult. You have to lay the ground rules early, to get the audience on the same page, to say: "This is what we will explore here." One thinks of something like "Living in Oblivion," an extended satire and lampoon of the challenges of independent filmmaking. The whole film is an exaggeration, but it's exaggeration in service of extremely targeted points and observations. This is what is not present in "The Argument." What is also not present is perhaps the most obvious: the existential or esoteric "Rashomon"-style questions about truth. "Then why? Why are we here?" says one of the "characters" in Jack's play. It's a good question, and one "The Argument" doesn't really answer. The final sequence of "The Argument" is very funny, but it's too little too late. 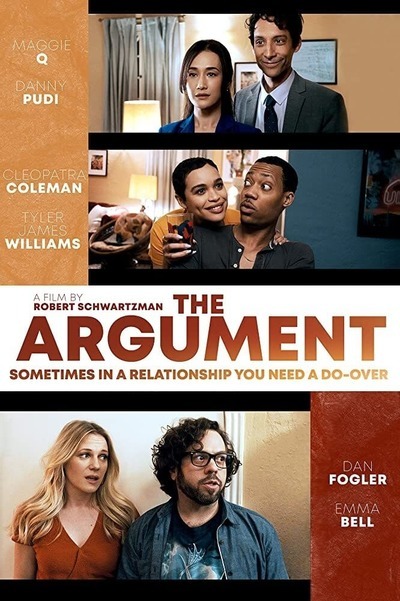