This review was originally published on January 15, 2020 and is being republished for the launch on Shudder today, June 8, 2021.

George A. Romero, like a lot of independent artists, had to die before he was taken seriously. He was influential, which became the most unfortunate stop gap to his being taken seriously. He created the zombie film as we understand it with 1968’s “Night of the Living Dead” after nearly four decades of other people trying and failing to get the formula just right. Then he had to scrounge for jobs and money to make his art for the rest of his life, thanks in part to the rights of “Night of the Living Dead” defaulting to public domain because he forgot to issue a new copyright when the movie’s title was changed from “Night of The Flesh Eaters.” Broke and hungry, he shot low-budget features in the early '70s and directed eight episodes of a sports documentary series called “The Winners,” profiling the likes of OJ Simpson and Reggie Jackson at the height of their popularity. By 1978 he’d save himself from the brink by collaborating with Italian filmmaker Dario Argento on the long awaited sequel “Dawn of the Dead,” but it was touch and go for most of the decade. Sometime in 1973, a Pittsburgh-based organization called Lutheran Services approached the hometown hero to ask if he’d shoot something for them about the myriad ways society discriminates against the elderly. Eager to work, Romero agreed. “The Amusement Park” so appalled the Lutherans that they refused to release it. Romero didn’t have the time or energy to fight them and moved on. It is only now being seen by the public almost a half-century later, having played in New York this past weekend.

Romero was never interested in subtly critiquing anyone; he went for the jugular and told you he was doing it. “Dawn of the Dead,” “Monkey Shines” (1988), “Land of the Dead” (2005) and especially “Survival of the Dead” (2009), his last film, didn’t waste time waiting to see if you caught on. They open with attacks on the US Military, the wealthy, corrupt government, and the systematic disenfranchisement of poor and working class Americans. “The Amusement Park,” like the same year’s “The Crazies,” which re-staged the Vietnam War in a Pittsburgh suburb, bites down on its hero’s neck and refuses to heal. Whatever the Lutherans thought they were paying for, they accidentally unleashed our most deeply cynical artist at the height of his ferocity toward the country's decaying morality, and wound up funding one of the most upsetting films of the '70s.

Lincoln Maazel, later the religious grandfather antagonizing the title character in Romero’s “Martin” (1978), opens the film with a direct address. He wanders through an empty, rain slicked park talking about how as you age, the variety of services and opportunities available to you shrink until it seems like there’s no place for the elderly. By way of demonstration Maazel’s going to take us to The Amusement Park, which will look a lot like the world outside despite its carnivalesque festooning.

Maazel, cheery and dapper in a crisp white suit enters a stark, sterile waiting room with only a few chairs and a sad, lonely figure bleeding from the face and out of breath. Maazel asks this fellow if he wants to go outside with him. “There’s nothing out there. You won’t like it!” the battered man manages through wheezing sobs. Undeterred, Maazel starts his day at the park. The ticket taker has to be interrupted from low-balling seniors out of their prized possessions like a crooked antique dealer before he’ll take money in exchange for tickets to the rides and attractions. The signs everywhere don’t advertise the park’s features, but rather read like questions on an insurance form or warnings on medication. The fun begins with a ride on a little train that turns sinister when Maazel starts seeing people in Halloween monster masks on board with the rest of the passengers. No one else seems to notice them.

It’s plain that something very bizarre is afoot when the old-timer hits the bumper cars and witnesses an accident. The two participants, an old woman and a young man, knock into each other and then treat it like a fender bender, going so far as to get a cop involved. Maazel tries to give his testimony but the cop notices in his records that he’s supposed to be wearing glasses—how could he have seen anything without them? Thoroughly shamed he leaves the scene of the accident to the sounds of the younger driver complaining that the elderly shouldn’t be allowed on the road.

Bad as things have been up until now, they jackknife into nightmarish without warning. His lunch is ruined when a wealthy diner requests his table be turned around so he doesn’t have to watch the less moneyed patron eat his grotesque vittles. He eavesdrops on a fortune teller showing a young couple in love what’s in store for them—pestilence and panic. The park empties except for Maazel in some kind of trance and then some bikers show up to beat and rob him. He tries to seek medical attention and is given a band-aid and the brush off. He’s finally broken when he tries to join a little girl’s picnic and her mother hastily packs up and forces her to leave while he reads her a story. He sees the grim reaper wandering the park and a gaggle of patrons chase him out of the freak show with murder in their eyes. Suddenly the sterile white room doesn’t look so bad.

Romero’s favorite film was Michael Powell and Emeric Pressburger’s “The Tales of Hoffmann.” Interviewed by Robert Elder, Romeo explained that “It was the filmmaking, the fantasy ... It was everything ... and it gave me an early appreciation for the power of visual media—the fact that you could experiment with it. He was doing all his tricks in-camera, and they were sort of obvious… It was transparent, but it worked.” Romero’s own fiction never relied heavily on the kind of trickery he saw in Powell & Pressburger’s filmed opera. Little symbols would appear clearly inspired by the work that turned him to the camera, like the blank faced anti-hero of 2000’s “Bruiser,” or the gorgeous comic tableaux of his EC Comics tribute “Creepshow” (1982). But it always seemed as though his love for Powell & Pressburger never got anything like the workout you expect from a student with one obvious master ... until “The Amusement Park” was unearthed. The film has the structure of “The Tales Of Hoffmann,” pitting its hero against a collection of unearthly foes in bizarre vignettes. “The Amusement Park” is the only one of Romero’s films that feels deliberately episodic without losing its through-line. In the visually overwhelming “The Amusement Park,” everything conspires against Maazel to make him feel enfeebled, unwanted, outmatched and near to death. Romero hits him with one damned thing after another until the relentlessness becomes the subject. This is his Powell film, and as a lifelong devotee to Romero, it’s really quite moving to finally get to see it.

Romero found himself in a place where the small budget he was given and his mindset were simpatico. He wanted everything to look cheap and obvious, because he was trying to draw his audience’s attention to things that may seem well hidden by custom but are right in front of us. The mock dinner in this film is a great example. The rich man who takes offense at having to dine near Maazel is served by two comedic waiters with oversized utensils, and though it’s got a kind of Chuck Jones lunacy to it, the sight of them lifting the rich diner in his chair and carrying him to the other side of the table is so flagrant it can only feel real. Discrimination against the poor won’t look the way it does here but it will always feel like it. The rubber masks that denote the demonic visions stalking the park are all the more nauseating for their artless appearance. The wild juxtaposition of Hell’s Angels and five-and-dime costumes predicts Rob Zombie’s marvelously outré Americana, a sensibility that similarly eschewed subtlety in its depiction of class warfare and masculine violence.

Of course, I don’t think even Zombie ever made anything as uniquely discomfiting as the fortune teller’s future for the young lovers. The wife notices her husband is sick and can’t call the doctor because the apartment is a wreck and there’s no phone or power, so she walks down the block to use the payphone, passing her landlord giving an interview to a local TV station about how it is the fault of tenants that his apartments are so run down. The doctor answers the phone and just as quickly hangs up, determined not to help the old woman or her mysteriously ill husband. She returns to the apartment and has to endure the sight of him writhing in pain again. So she goes back down the street to try calling the doctor again, only this time there’s a parade drowning out her call.

In a world kinder to artists like Romero, the rediscovery of this lost film would be an event on par with the restoration of Orson Welles’ “The Other Side of the Wind.” But in order for that to be the case, the world would have to care a lot more about what horror films have to say. The world at large has never taken horror seriously because the emotions associated with it are treated as something like frivolous. Being scared, or examining what makes us that way, are not thought of as serious pursuits. The degenerate nature of his chosen study kept Romero a legend untouched by mainstream acceptance, still fighting tooth and nail for budgets in his old age. As Roger Ebert said in his review of “Dawn of the Dead”: “maybe ... there's a little of the ghoulish voyeur in all of us. We like to be frightened. We like a good creepy thrill. It's just, we say, that we don't want a movie to go too far.” “Too far” was the only place Romero was ever headed. It’s time the rest of us caught up. 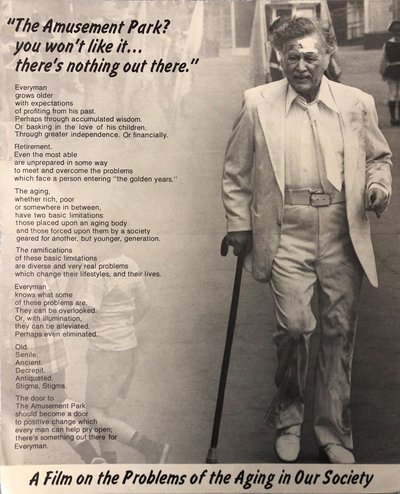