The Age of Shadows

If Kim Jee-woon’s fantastically entertaining “The Good, the Bad and the Weird” saw the talented Korean director playing with the milieu of Sergio Leone, his latest, the espionage thriller “The Age of Shadows,” could be categorized as a riff on the films of Carol Reed—there’s a lot of talk of loyalty to country and double agents working both sides against the middle, and even comes with an extended sequence aboard a train filled with spies. At 140 minutes, Kim sometimes loses the rhythm of his spy thriller, but he's such a confident filmmaker—and his leading man such a magnetic presence—that he quickly gets its back. “The Age of Shadows” may not be among its filmmaker’s best works (I adore “Good,” “A Tale of Two Sisters,” and the vicious “I Saw the Devil”) but it’s not for lack of ambition or scope.

“The Age of Shadows” opens with a meeting between a fighter for the Korean resistance against the Japanese occupation (the film takes place in 1920s Korea) and an antiques dealer. As the fighter is trying to sell an item to raise funds for the resistance, it becomes clear something is wrong. Before you know it, dozens of police officers descend upon the place and a chase ensues that sets the stage for the two hours to come, in that it’s a situation that looks horribly out of balance—one man trying to escape an army. That army is led by Lee Jung-chool (the great Song Kang-Ho), who seems to be the only one trying to take the target alive—again setting up his character as someone stuck between immovable forces. After the freedom fighter is injured so badly that he literally twists his own toe off, he kills himself. This will be a film about men willing to die for that which they believe in, and how impossible that kind of commitment can be to stop.

Much like “Good,” “The Age of Shadows” develops into a three-character piece. There’s Lee, the Korean captain working for the Japanese police, who becomes sympathetic to the causes and the people behind the resistance he’s been assigned to stopping; there’s Kim Woo-jin (Gong Yoo, recently seen in “Train to Busan”), the new leader of the resistance; and there’s the Japanese agent Hashimoto (Um Tae-goo), who often looks like he’d be willing to kill an entire train of people just to stop one resistance fighter. The fact that Hashimoto and his vicious superior are sketched as near-sociopathic men, willing to do whatever it takes to stop the insurgence, makes Lee’s interest in the other side believable. It doesn’t hurt that the director gives Kim a minor love story—he’s fallen hard for Yun Gye-Soon, the heroine of the resistance, played by Han Ji-min—thereby humanizing him even further.

There is a lot of discussion of informants and double agents in “The Age of Shadows,” to the point that story often gets muddled and the actual stakes feel lessened. Kim works primarily in action outbursts—a train centerpiece, the highlight of the film, puts all the good guys and bad guys on board and then slow-burns to its explosive climax. By defining Lee’s loyalties as seriously unclear at this point and then putting spies, police officers and a ton of explosives on a train to Seoul, Kim’s film justifies the cost of admission in just the train sequence alone. It’s beautifully conceived, framed and executed. Outside of that, there are a few extended scenes, but calling this an action film would be misleading.

While Kim’s filmmaking is typically engaging, it’s really Song Kang-ho who carries the viewer’s interest. Gong Yoo may get the more traditional hero role, but it’s important to the director that we see this story through the eyes of the man caught in the middle. The star of “Thirst” and “Snowpiercer” is typically fantastic, a man conflicted enough to question the role he’ll play in a formative chapter of his country’s history. Everyone here is good, although I do wish some of the supporting characters had been fleshed out a bit more. We know almost nothing about Yun Gye-Soon outside of the love-struck eyes given her by Kim Woo-jin and a visually striking sequence in the train station. When her torture becomes a key, disturbing event in the final act, it lacks resonance because of how little we know about her.

Although perhaps that’s part of the point. None of these people knew much about each other, or even themselves. “The Age of Shadows” is about a man caught between country and duty; decency and obligation. It is about people in a time in which black and white lost their meaning, and everything blended to the gray of shadow. 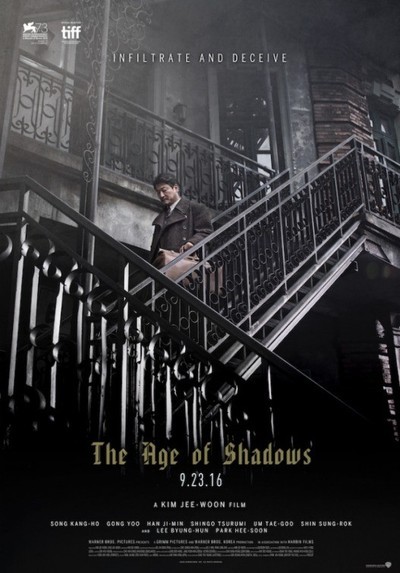