The Adventurer: The Curse of the Midas Box

There are some critics and thinkers who posit that mediocrity is worse than out-and-out failure, but the really pernicious thing about mediocrity is that it's so banal that it's more difficult to get productively agitated about than the truly awful. Arguably, that is. I'm sorry that I seem to be so circuitous, but I'm trying to give a proper account of the state of thought into which I found myself thrust by "The Adventurer: The Curse of the Midas Box." This movie's title indicates that it could be the first of a series, and sure enough, the movie's script was adapted from a popular fantasy book by G.P. Taylor that is the first of a series, not under the rubric "The Adventurer" but rather "Mariah Mundi" who is the lead character of the book and whose name probably doesn't look great on a movie poster.

Not that Mariah, a late teen in Victorian-era England, is really much of an adventurer. In this picture he's a fellow who's obliged to do some hopping around London to find his younger brother Felix, who's been kidnapped by the minions of Otto Luger (Sam Neill) on account of having half of an amulet that leads to a realm in which resides the changing-stuff-to-gold "Midas Box" of the movie's subtitle, an object of enormous power as you of course can imagine. If you can't imagine, the movie, directed by Jonathan Newman, spells it out for you with some opening narration: "He who owns the box can own the world." Mariah's quest leads him to an unusual "hotel" presided over by a vampy Lena Headley, where he encounters an eccentric magician, a waifish teen maid from a bad/sad home, and eventually the underground quasi-mine in which his bro is enslaved.

Helping him in his quest is a puckish fellow named Charity (Michael Sheen). Similarly, Luger's grinchiest henchmen are named Grimm and Grendel. It's that kind of fantasy realm; a little watered-down steampunk, some similarly diluted Indiana Jones stuff, a little not-quite-Pottery material. The derivative and on-the-nose aspects of the material and its treatment are, of course, big parts of what make this movie, well, mediocre. But even as I was being figuratively pummeled with the aforementioned quality, I couldn't get mad at "The Adventurer." Well, except maybe at lines of dialogue such as "He drinks away the pain of my mother's death." At other points, and perhaps I was just in a humdrum non-judgmental mood, I thought, "I'm not really engaged by this but then again it's not really for me, and it seems…harmless." Given that it is January, the month of cinematic dogs, and that critically lauded pictures from the holiday season such as "American Hustle," "Inside Llewyn Davis," and good lord "The Wolf of Wall Street" aren't really ideal YA fare, there are potentially worse things. Then again, it's entirely conceivable that teens and YAs are a lot more ruthless in their judgment than I am, and that the sheer toothlessness of "The Adventurer: The Curse of the Midas Box" might push all the wrong buttons. I couldn't really tell you. Meh and double meh on this movie. That's my story and I'm sticking to it. 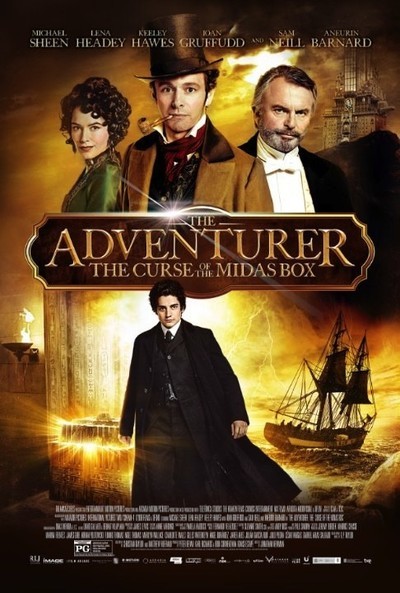