“The Advent Calendar” is a French-made version of one of the most time-honored tropes in all of horror fiction—the be-careful-what-you-wish-for narrative in which a character is given the ability, usually through some kind of talisman, to make their deepest wishes and desires come true, only to discover too late that there's a terrible price to pay in return. This device has been utilized in everything from the immortal W.W. Jacobs short story The Monkey’s Paw to Richard Kelly’s defiantly strange adaptation of Richard Matheson’s story “The Box” to the recent "Wish Upon." However, most viewers will find themselves wishing that writer/director Patrick Ridremont had come up with a few variations on this standard theme in order to liven up this competently executed but painfully familiar genre exercise.

Eva (Eugenie Derouand) is a former dancer who is now in a wheelchair after being paralyzed from the waist down in a car accident a few years earlier. Lamenting the loss of what she once had and stuck in a dead-end job at a sleazy insurance firm while watching her father further succumb to the ravages of Alzheimer’s, Eva is firmly in the dumps as the holiday season begins when her brassy friend Sophie (Honorine Magnier) blows in from Germany with a birthday gift she acquired at a Christmas market in Munich—an ornate antique advent calendar that contains a piece of candy (among other things) behind each of the 24 doors. It also contains some rules that are stern even by German standards and which culminate with the order “Dump it and I’ll kill you.”

Despite that, Eva starts eating the candy and strange things begin to happen to her. One of the candies was her father’s favorite and as soon as she eats it, she receives an unexpected call from her now-lucid father that so delights her that she barely registers that the phone she spoke to him on was disconnected. Another one bears a heart on its wrapper and she uses it to attract the cute guy at the park that she has been crushing on. Things take a darker turn when her dog chews up a toy car that emerged from one of the doors and a sleaze that tried to sexually assault Eva dies in a bizarre car accident. Other people around Eva begin to meet similar grisly fates—some more deserving of them than others—but even when she figures out that there is a connection between the calendar and the deaths, she is reluctant to stop doing it, mostly because of her belief that if she continues on with it, the payoff after the final door will be that she regains the ability to walk and dance.

That kind of powerful inspiration is certainly enough to spur Eva on during “The Advent Calendar” but Ridremont’s story lacks a similar sense of motivation. Although Eva is certainly sympathetic enough on the surface, the film never quite manages to establish either her character or her profound sense of loss over being robbed of her ability to dance and the result is an undeniable lack of genuine emotional impact that the story might have otherwise maintained. Instead, it's more interested in jam-packing the narrative with mostly loathsome peripheral characters for no other reason than to have plenty of potential victims for the ensuing death scenes. The other problem is that since the advent calendar conceit all but requires that the story not conclude until December 24, a story that might have been more effective as a one-hour episode from a series like “Creepshow” or “Black Mirror” clocks in at nearly double that length and grows somewhat repetitive as a result.

Derouand is undeniably interesting in the role of Eva, but not even her efforts can rescue “The Advent Calendar” from being a story that goes on too long before arriving at a climax that's kind of a mess. It doesn’t even utilize the holiday season setting in a particularly meaningful way, which is odd since one can certainly detect two of the most famous Christmas narratives—“A Christmas Carol” and “It’s a Wonderful Life”—in its artistic DNA. But the film isn’t terrible, I suppose, and someone looking for an offbeat Yuletide shocker to have on in the background while wrapping presents could certainly do worse than this. 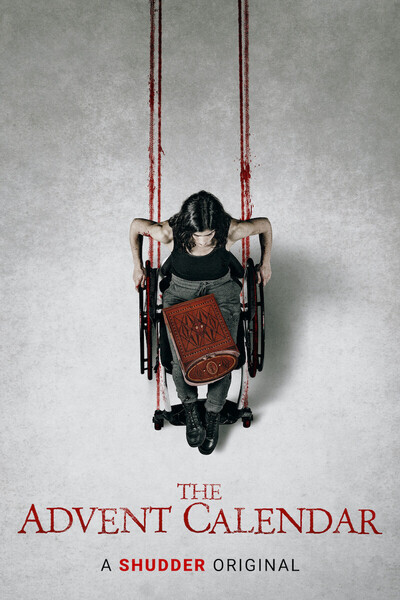