This sequel makes up for some of the problems with the 2019 "Addams Family" animated family film, which suffered from an uneven tone and a meandering storyline. The characters and setting originated in the original Charles Addams one-panel cartoons in the New Yorker, a nameless family with an amusingly gruesome way of life, then a 1960s sit-com with the memorable Vic Mizzy theme song, followed by two waspishly witty live-action films. ("Don't torture yourself," Morticia Addams soothes her husband, Gomez. "That's my job.") Other versions included a television cartoon show and a Broadway musical. The 2019 film had a bland "the real monsters are the ordinary conformist people" storyline that failed to take advantage of the main appeal of the Addams family, the combination of their ghoulish enjoyment of the macabre and their genuine affection and support for each other. The new film has a better understanding of how to make the most of what has made these characters so enduringly popular, including the Vic Mizzy song.

STEM superstar Wednesday Addams (Chloë Grace Moretz) has something special for the school's science fair. In a set-up reminiscent of the spooky lab in "Frankenstein," she has invented a procedure for transferring the attributes of one creature to another. As a demonstration, she implants some of the brain power of her Rubik's Cube-solving pet octopus to her cheerful but not very bright, raspy-voiced Uncle Fester (Nick Kroll). She is disappointed when they give everyone a participation trophy instead of picking someone to be the best. But the sponsor of the science fair, a tech whiz named Cyrus Strange (Bill Hader) appears via hologram to invite Wednesday to work with him to perfect her invention. She turns him down.

Gomez (Oscar Isaac) is worried that Wednesday is not as close to him or as appreciative of his love for her as he wants her to be, and so he decides to take the family on a cross-country vacation in their version of an RV, complete with goth decor and a fireplace. His plan is to visit the country's many "dark secrets." He only means Halloween-style darkness like the Salem witch trials, Sleepy Hollow, and Death Valley.

The family is off to see the sights and, Gomez hopes, spend some quality time together. But they are pursued by a lawyer (Wallace Shawn) who says Wednesday was switched at birth and is the biological daughter of his undisclosed client. Wednesday is gruesome even by Addams standards, and her increased frustration with her family makes the idea of her belonging somewhere else have some appeal. The scariest thing about Gomez is his tendency to hugs and dad jokes, while Wednesday says she has been social distancing since birth and her reaction to Salem burning girls at the stake for being witches is #squadgoals.

The road trip gives the movie visual sparkle, with stops at some iconic locations and a visit to the home of Cyrus Strange, a Frank Lloyd Wright-style gleaming ultra-modern structure with sharp horizontal lines that shrewdly contrasts to the dark, ornamental, Victorian gothic of the Addams mansion. There are fascinating and witty details every scene that will reward repeated viewings, thanks to art direction from Chris Souza and Kathleen Shugrue and production design from Patricia Atchison. The needle-drop songs on the score bring energy and some commentary on what is happening as well, with a very funny use of the classic, "I Will Survive." Snoop Dogg, as Cousin It (just one "T" in the credits of the film, though the original series and many crossword puzzles give him two), gets a chance to spit some doggy-style rhymes in a rousing concert performance.

An intrusive product placement billboard will trigger the irritation viewers may have with the odd cross-promotion in television commercials on behalf of both this movie and an insurance company. Of more concern, parents may get some tough questions due to the paternity issues raised by the film, including DNA tests. The issues of who a child "belongs" to and what biology has to do with identity will be a concern for some families. But it is presented in a spirit of love and acceptance, and that should be reassuring. So is the notion that the Addams families are finally getting a chance to show what they do best: they make the scary silly and make sure all family members know how much they are loved. 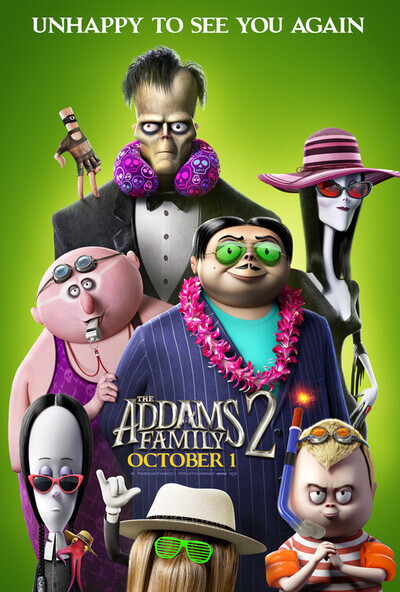 Rated PG for macabre and rude humor, violence and language.

Snoop Dogg as IT (voice)