As a swarm of imaginary comic-book heroes continue to spawn sequels and spinoffs, The "25,000 Mile Love Story" is a rare opportunity to celebrate the accomplishments of a real-life human being while serving as an inspirational reminder that mere mortals are capable of amazing feats even if they don’t hail from Asgard or Krypton.

This documentary might motivate even the most dedicated couch potato to stroll around the block occasionally after observing Serge Roetheli—known as the Swiss Forrest Gump—run a five-year-long, globe-circling marathon across 35 countries and six continents.

The lean-and mean middle-age marvel, a onetime Olympian boxer who grew up near the Alps and works as a mountain guide, earned his nickname during an earlier warm-up act: A successful trek on foot across both American continents that began in 1995 in Argentina and lasted for nearly three years before ending in Fairbanks, Alaska.

Considering the perils that awaited Roetheli during his worldwide sojourn that kicked off in early 2000 is recounted here, he definitely deserves to wear a large red “S” on his chest. No wonder a Los Angeles Times columnist ranked him alongside with the greatest endurance athletes of all time: “Edmund Hillary, Thor Heyerdahl and Moses.”

Imagine "The Amazing Race" with such challenges as surviving dehydration induced by the blazing Sahara Desert and suffering through deadly malaria caused by relentless mosquitoes. Mother Nature provides such detours as venomous snakes, monsoons, floods, mud and blizzards. For roadblocks, Roetheli must contend with African civil wars, intensified post-9/11 scrutiny in the Middle East, steep Himalayan pathways and stifling Malaysian jungles. His pit stop almost every night: A pup tent with little protection from potential intruders, wildlife or the elements.

Of course, behind every super man is a super woman. In this case, one who sits astride a motorbike pulling a cart filled with their precious few supplies. That would be Roetheli’s wife, Nicole, a green-eyed goddess and his unwavering supporter. She put-puts faithfully alongside her road warrior husband after agreeing to sell their home and possessions to fund the trip while leaving family and friends behind.

Not only does Nicole, a trained triathlete herself, prove to be adept at navigating dicey terrain, she also manages to look incredibly chic no matter the extreme conditions. Only a Miami hurricane at full roar can smear Nicole’s perfect makeup and mess her stylish hair. Besides the 64 pairs of running shoes that Serge wore out, we learn that his better half went through 101 tubes of lipstick during the course of their adventure.

Save for the bites from the vampire-like mosquitoes, Nicole does not suffer Serge’s constant physical pain, which includes bloody blisters, damaged toenails, tendinitis and a broken elbow caused by a wayward driver. But she proves to be the most fearless member of the pair. After falling into a coma and having seizures brought on by cerebral malaria—a symptom that will likely continue the rest of her life—she fights back from the brink of death and refuses to quit their mission. She also must deal with the fact that women are treated like second-class citizens or worse in certain cultures they encounter– not to mention men who leer and brazenly touch her in public. As she says, sometimes she was treated like a princess and sometimes like a prostitute.

The only pitfall along the way that truly shakes this determined couple happens when their charity sponsor that assisted in setting up their agenda and provided supplies along the way decides to pull out about two years in. They eventually find a new sponsor through an American doctor and end up raising about $400,000 for poverty-stricken and sickly children, many of whom put in heart-tugging cameos during stops at medical clinics and orphanages.

"The 25,000 Mile Love Story," , which will eventually find its way onto TV and video on demand after playing select cities, is based on a same-titled book and a diary kept by Nicole. It makes for one heck of a travelogue as Serge’s path leads him to places that are often too treacherous for the common tourist. The sights are spectacular. The mountains of Nepal and especially Iguazu Falls in South America. The Sphinx, the Taj Mahal, Mount Acagongua, the Sydney Opera House, the Eiffel Tower and the White House all grab their share of screen time.

Director and writer John Davies, who early on in his career was a producer on PBS’ "Sneak Previews" with Roger Ebert and Gene Siskel, does a fairly good job of piecing together hundreds of hours of raw footage shot by the couple during their travels along with up-to-date interviews. John Ridley, screenwriter of "12 Years a Slave," narrates.

But the “love story” boasted by the title suffers somewhat in its depiction. Because the film captures minimal dialogue on the road, we rarely get to hear Serge and Nicole interact intimately as a couple, or even with other people they meet. And while the film deals with their physical and mental travails in great detail, there are only brief exchanges of affection—and no arguments. One suspects that, like most people, they were less keen on recording their more private and perhaps less flattering moments—although perhaps there was little opportunity to disagree, considering that he runs and she drives. Also a bit distancing: Nicole apparently does not know English, so a translator talks over her words in French while aping her inflections. This creates another barrier to getting to know her as well as we do Serge, who speaks for himself.

While their ultimate goal is reached through much sacrifice, their love story ends on a somewhat bittersweet note foreshadowed by this revelation from Nicole: “Serge and I did not make a good couple on this trip. Far from it at times. But we make a good team. Very strong and very united." That Herculean team spirit, along with their drive to achieve what is considered an impossible dream by others, makes "The 25,000 Mile Love Story" an uplifting experience. 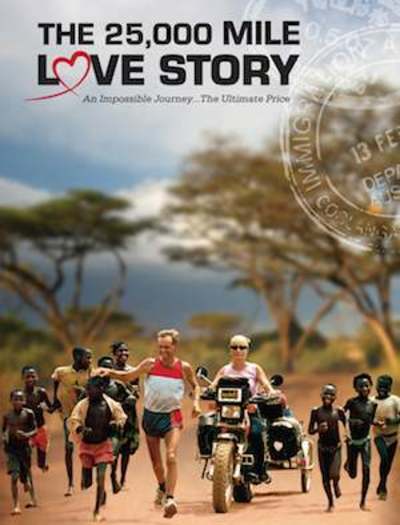