Back in the summer of 1972, photographer Peter Beard and socialite Lee Radziwill, the younger sister of Jacqueline Kennedy Onassis, had the idea of making a film that would deal with the changes being brought about by the rapid development occurring in East Hampton, Long Island, while touching on the storied history of Radziwill’s family. Upon arriving with their crew, they quickly realized that the real story was already there in the form of Edith Bouvier Beale and Edith “Little Edie” Bouvier Beale, Radziwill’s aunt and cousin who were living in squalor and virtual isolation in the dilapidated mansion known as Grey Gardens. For reasons that have never been fully explained, the project was eventually abandoned but two of the members of the film crew, documentarians Albert and David Maysles, were so fascinated by the Beales that they returned later to make “Grey Gardens” (1975). That documentary made cult figures out of the Beales and launched a cottage industry that would go on to include the 2006 followup documentary “The Beales of Grey Gardens” (2006), a 2006 stage musical and a 2009 HBO movie with Jessica Lange and Drew Barrymore portraying Edith and Big Edie, respectively. As for the four reels of 16mm footage from that original aborted shoot, they were never shown and for years were thought to be lost. Having been recently discovered, that footage now helps make up the brand-new documentary, “That Summer.”

When Beard, Radziwill and the crew arrived at Grey Gardens, it was said that there had been no real visitors there in more than five years and the house and grounds had fallen into such disrepair that county authorities were threatening to evict the Beales. In an effort to help her relatives keep their home, and using money supplied by Aristotle Onassis, Radziwill brought in handymen to help her and Beard fix the plumbing and electricity, clean away as much of the dirt and mold on the walls as possible and remove the mounds of garbage in order to bring the place at least reasonably up to code. As for the Beales themselves, the presence of all these people, not to mention bad past experiences with the local authorities, clearly had them a bit rattled. Edith was much crueler towards everyone other than Radziwill—at one point, she talks about how the many cats they have (including one she claims bears a resemblance to Ted Kennedy) get rid of all the vermin and snaps to her daughter “The only vermin here is you, Edie.” As for Little Edie, she was never that mean but there are moments in which a certain melancholia about her life seeps through, as when she talks about a chair she bought that no one uses but her. She dubbed it “The Disappointment Chair.”

Truth be told, I have never been the biggest fan of “Grey Gardens.” Although I do not believe that the Maysles intended to be exploitative towards the Beales and their eccentricities, it feels as if we are invited to laugh not with them but at them as if they were a real-life version of an early John Waters film. The footage in “That Summer,” on the other hand, is more empathetic towards its subjects. Sure, their eccentricities are in full bloom, especially in regards to Little Edie, who flounces around amidst the piles of detritus in search of her makeup, brags about having yelled at Jackie O. on the phone and breaking out into an impromptu rendition of “My Adobe Hacienda.” However, they and their quirks are regarded by Radziwill with obvious love and affection and no small amount of admiration for the way that they have chosen to live life on their own unusual terms. Yes, Little Edie would go on to publicly trash Radziwill in later years, but it must be noted that her encounters with her unusual relatives as seen here do not inspire the kind of bad taste in the mouth that “Grey Gardens” can leave.

The major problem with “That Summer” is the inescapable fact that it only barely qualifies as a movie. In his previous film, “The Black Power Mixtape 1967-1975,” director Goran Olsson deftly brought together footage documenting the rise of the Black Power Movement into an often-stunning document of the era. For this project, he basically presents the four reels as is, an approach that doesn’t give him much chance to utilize his own directorial voice. And since those four reels are not long enough to make for a standard feature-length film, he ends up padding it out with such additional elements as audio clips from a 2013 interview with Radziwill conducted by Sofia Coppola and a long prologue shot in 2016 that features Beard looking at books of his photographs and home movies (including footage shot by Andy Warhol and Jonas Mekas) while reminiscing. The Radziwill audio is fascinating to hear, though there simply isn’t enough of it. The present-day Beard footage, on the other hand, is kind of tedious, though it is interesting to note that even though he refers to the friends seen in those long-ago images only by their first names (Jackie, Andy, Mick, Bianca, Truman), we instantly know who they are and feel a certain degree of nostalgia for that bygone era.

“That Summer” is basically the art-house equivalent of “Solo: A Star Wars Story”—a prequel of sorts to a key Seventies movie that fills in a little of the back story of a couple of its most notable characters but never quite manages to totally justify its own existence. Fans of “Grey Gardens” who are eager for yet another hit of eccentricity from the Beales will no doubt eat it up. But those unfamiliar with the whole saga are likely to find it more bewildering than anything else. 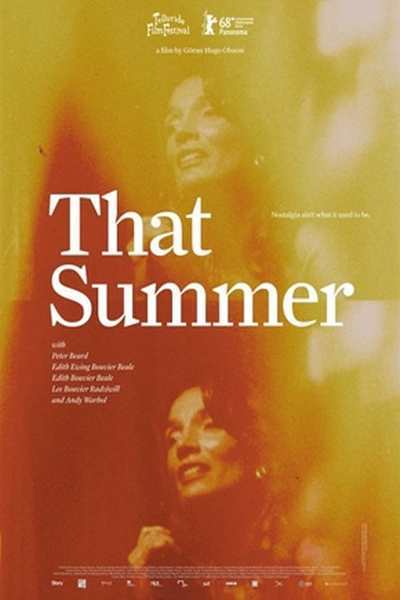 Edith Bouvier Beale as Herself