That Man From Rio

"Sir, could you please arrest me?" the French airman hero of the 1964 adventure picture "That Man from Rio" asks a Brazilian cop, midway through his odyssey to rescue his kidnapped fiancée. "I'm a deserter, I lost my uniform. I flew without a ticket, conned an invalid, I fought with men of all nations and colors, and I drive around in a stolen pink car with little green stars. I'm also guilty of public indecency." Then he sticks his wrists out. "The handcuffs, please."

Said fiancée, Agnès Catalan (Françoise Dorléac, who died in a car wreck just three years after this film came out) is, at that moment, sitting directly behind the hero, in the aforementioned little pink car with green stars. The hero, Adrien Dufourquet (Jean-Paul Belmondo), rescued  Agnès earlier; now they're chasing three statuettes that are believed to have magical powers, battling and evading henchpersons along the way. Don't worry, I'm not giving away anything important; this is the kind of film in which people get kidnapped and re-kidnapped and ancient statuettes are stolen and re-acquired and stolen again. Wha matters isn't what happens but how things happen: the way people look slyly or lustily or contemptuously at each other, or duck behind pillars and partitions, or shimmy along cables, or drive fast along winding Brazilian mountain roads, shouting romantic banter so that it can be heard over the roaring car engine and the whistling wind. The point is, at a juncture in the narrative where an arrest might do the hero and his fiancé some good, the cop won't oblige, because "That Man from Rio" is a one-damned-thing-after-another film in which nothing goes as planned and the heroes have to improvise. As Indiana Jones might say, they're just making it up as they go.

That Dr. Jones reference doesn't come from nowhere. Steven Spielberg has often praised this movie from Phillippe De Broca, who entered features after working as an assistant director to French New Wave giants and served as an Army cameraman in the French-Algierian war before that. You can feel the Jonesiness in every minute of "That Man from Rio"—and not just when a thief is sneaking into an art gallery and swiping a statuette and incapacitating a guard with a dart pistol, or when Adrien is walking across a thin plank stretched between two high scaffoldings on a construction site while listening for the sounds of two killers climbing after him.

You also sense the influences of James Bond and Tintin (whose exploits Spielberg chronicled in a 2010 feature). All three sources share not just a preoccupation with action for action's sake, but also a tourist sensibility, and an accompanying, often rather blithe sense of the third world as a personal playground for good looking white folks—an enchanted land of sensuality and music. Uberacy de Olivieira, the child actor who plays Adrien's shoeshine boy sidekick Sir Winston, is undeniably charming, but he's such a smiling cipher that he makes Short Round from "The Temple of Doom" seem like a psychologically complex person.  Somehow the paternalistic attitude doesn't rankle (not as much as it might have, anyway); maybe it's because the movie's tone is feather-light. The characters are not so much plausible individuals as a fusion of attitudes and actions, with magnificent hair and clothes.

This is a cinematic confection, like "The Adventures of Robin Hood" or "Raiders of the Lost Ark" or either version of "The Thomas Crown Affair"—or like a nearly plotless cousin of "North by Northwest," with three MacGuffins instead of one, and Belmondo as a working class-hero version of Hitchcock's standard good-man-in-over-his-head, performing extraordinary feats with a nonchalance that makes them seem all the more impressive. De Broca's filmmaking always had a dancer-like exactness—every camera move and cut timed for maximum effect—but his choreography achieves peak awesomeness here. The whole movie just seems to glide.  Like all great action filmmakers, he teaches you how to watch his work. Once you've seen a few suspenseful sequences, you know that everything in a frame is there for a reason. If puts a window in a shot, something important is about to happen within its borders. If the camera slowly twists from one axis to another, revealing a side of the room you haven't seen before, watch out.

Belmondo did a number of his own stunts for "That Man from Rio," and de Broca frames the moments so that you know it's him. They obviously have a rapport; it's no surprise that they worked together twice more. We don't think of Belmondo as an action star per se, but that's what he is here, smirking like Steve McQueen and managing to keep a cigarette clamped between his lips even when he's navigating hairpin turns on a motorbike. There's an understatedly lovely sequence of shots about 90 minutes in where Adrien chases a car on foot and keeps chasing it. De Broca cuts to a series of wide shots of the hero running, running, running, through depopulated panoramas, past elegant futurist structures (overpasses, apartment towers, archways). It's visual poetry of of the most basic sort, and it may evoke a line by Agnes from earlier in the film: "How can you be blasé amid all these wonders?" 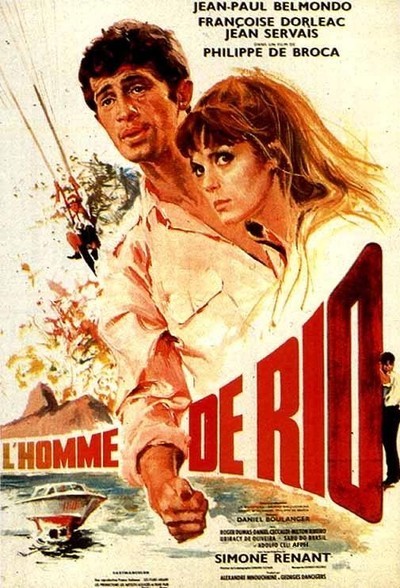 Lucien Raimbourg as General in wheelchair