The Adventures of Robin Hood

"The Adventures of Robin Hood" was made with sublime innocence and breathtaking artistry, at a time when its simple values rang true. In these cynical days when swashbucklers cannot be presented without an ironic subtext, this great 1938 film exists in an eternal summer of bravery and romance. We require no Freudian subtext, no revisionist analysis; it is enough that Robin wants to rob the rich, pay the poor and defend the Saxons not against all Normans, only the bad ones: "It's injustice I hate, not the Normans."

The movie involved a couple of firsts: The first Warner Bros. film shot in the three-strip Technicolor process, and the first of 12 times Flynn would be directed by Michael Curtiz. It was the fifth of eight films that Errol Flynn and Olivia de Havilland would make together.

It is a triumph of the studio system. The producer, Hal B. Wallis, was the most creative executive on the Warner Bros. lot, and when the studio's biggest star, James Cagney, walked off angry and left "Robin Hood" without a star, Wallis had the clout and daring to cast Flynn in the role--Flynn, a young man from Tasmania with only one Hollywood hit, "Captain Blood." It was Wallis who decided to use the new and expensive Technicolor process, Wallis who fired an early writer who wanted to dispense with Maid Marian, Wallis who was powerful enough to replace the original director, William Keighley, with Curtiz--because Keighley fell ill, according to one story, or because Wallis wanted Curtiz to pump up the action scenes, according to another. Keighley did most of the outdoor scenes, Curtiz did most of the studio shooting.

The result is a film that justifies the trademark Glorious Technicolor. "They just don't make movies with this level of tonal saturation any more," writes the British critic Damien Cannon. Consider the opulent tapestries of the castle interiors, and reds and golds and grays and greens of Milo Anderson's costumes, the lush greens of Sherwood Forest (actually the studio ranch at Chico, Calif.). The cinematographers, Sol Polito and Tony Gaudio, were using the original three-strip Technicolor process, which involved cumbersome cameras and a lot of extra lighting, but produced a richness of color that modern color films cannot rival.

For all of its technical splendor, however, the film would not be a masterpiece without the casting--not just of Flynn and de Havilland, who are indispensable, but also of such dependable Warners' supporting stars as Claude Rains, as the effete Prince John; Basil Rathbone, as the snaky Sir Guy of Gisbourne, and Patric Knowles, Eugene Pallette and Alan Hale as (respectively) Will Scarlett, Friar Tuck and Little John, the fearless Merry Men. Unlike modern films where superstars dominate every scene, the Hollywood films of the golden era have depth in writing and casting, so the story can resonate with more than one tone.

Because Errol Flynn in later life became a caricature of himself and a rather nasty man, it's exhilarating to see him here at the dawn of his career. He was improbably handsome, but that wasn't really the point: What made him a star was his lighthearted exuberance, the good cheer with which he embodies a role like Robin Hood. When George C. Scott was asked what he looked for in an actor, he mentioned "joy of performance," and Flynn embodies that with a careless rapture. Watch his swagger as he enters John's banquet hall and throws a deer down before the prince, full knowing that the punishment for poaching a deer is death. Surrounded by his enemies, he fearlessly accuses John of treason against his brother Richard the Lionhearted, and then fights his way out of the castle again. Another actor might have wanted to project a sense of uncertainty, or resolve, or danger; Flynn shows us a Robin Hood so supremely alive that the whole adventure is a lark. Yes, his eyes shift to note that the exit is being barred and guards are readying their swords, but he observes not in fear but in anticipation.

This is the scene at which Maid Marian first sees Robin, and we first see her. That Olivia de Havilland was a great beauty goes without saying, but as I watched the new DVD of "The Adventures of Robin Hood," I found myself more than once pausing the film to simply look at de Havilland in closeup, her cheeks rosy in Technicolor, her features fine and resolute. The shift in her feelings about Sir Robin is measured out scene by scene. It is not a sudden transition but a gradual dawning upon her that this is the man she loves, and that she must escape her arranged marriage to Gisbourne.

Their love scenes, so simple and direct, made me reflect that modern love scenes in action movies are somehow too realistic; they draw too much on psychology and not enough on romance and fable. It is touching and revealing to see the lovers in middle age in "Robin and Marian" (1976), with Sean Connery and Audrey Hepburn bridging the poignancy of their long separation, but how much more satisfying on an elementary level to see Flynn and de Havilland playing their characters as the instruments of fate; they come together not simply because of love or desire, but because they are so destined. Their union suggests the medieval ideal of chivalric love, in which marriage is a form of God's will.

The swashbuckling in the movie is thrilling precisely because it is mostly real. The weakness of modern special effects pictures is that much of the action is obviously impossible, and some of the computer animation defies the laws of gravity and physics. It is no more possible to be thrilled by Spider-Man's actions than by the Road Runner's. It is more exciting to see the real Jackie Chan scampering up a wall than to see the computer-assisted Jackie Chan flying.

Stunt men were used in some shots in "The Adventures of Robin Hood." But many daring scenes obviously use the real Flynn, who, like Douglas Fairbanks Sr. in the 1922 "Robin Hood," wanted it known he took his chances. Some stunts are the same in both pictures, as when Robin cuts the rope holding a gate and then rides the rope up as the gate comes down. Others include carefree leaps from ankle-breaking heights, and of course the sword fights. The new Warner's DVD assembles the historians Rudy Behlmer, Paula Sigman, Leonard Maltin, Bob Thomas and Robert Osborne, for a documentary about the making of the film, and from them I learn that it was fencing master Fred Cavens who was primarily responsible for the modern movie swordfight; he believed "it should look like a fight, not like a fencing match," and Flynn, coached by Cavens, hurls himself into the sword scenes with a robust glee.

Seeing Flynn in the swordfights, I tried to imagine the studio's first choice, James Cagney, in the role. "It's an interesting concept to think of James Cagney in his little green outfit," muses Robert Osborne. "This little short fellow running around Sherwood Forest." Cagney was a fearless physical actor, and as a dancer, he would have had the footwork for the fencing; the casting is not unthinkable, but many scenes show bodies full-figure, which would have emphasized the difference in height between Cagney and Rathbone (but not Rains); cast changes might have been necessary. As Cagney watched this film even he must have conceded that Flynn was perfect for the role.

There are moments in "Robin Hood" as playful as a child's game, as when Robin and his men rise to the bait of Prince John's archery tournament. Are we to believe that the most wanted men in the kingdom could disguise themselves simply by pulling their hats low over their faces? And there are moments a little too obvious, as when Robin takes Marion to a part of Sherwood Forest occupied by some of the Saxons he has helped, and they skulk about like an engraving of tired and huddled masses, rousing themselves to express gratitude to him. We knew that Robin Hood took from the rich to give to the poor, but we didn't know he ran his own refugee camp.

There are also moments of bravado, as when an arrow extinguishes a candle on its way to killing a Norman. And when Robin's arrow splits his opponent's in the archery tourney. And the great sword fight between Robin and Sir Guy that cuts between the men and their shadows. And Technicolor is never more glorious than in the big outdoor scenes of pageantry, such as the assembling of the court for the tournament.

The intimate scenes have a directness that is almost bold. When Robin and Marian look in each other's eyes and confess their love, they do it without edge, without spin, without arch poetry. The movie knows when to be simple. And it is the bond between Robin and Marian, after all, that stands at the heart of the movie. The ideal hero must do good, defeat evil, have a good time and win the girl. "The Adventures of Robin Hood" is like a textbook on how to get that right. 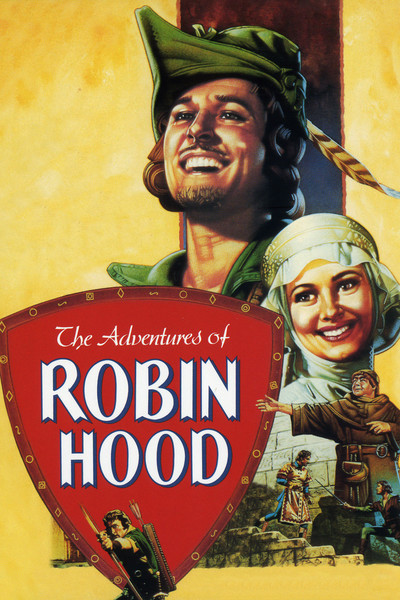