There’s a moment in Lyric R. Cabral and David Felix Sutcliffe’s excellent “(T)ERROR” in which everyone in the audience will instantly sit up and move forward in their seat, expressing shock with their body language. I almost wish I could see it in a theater just to witness it. Executive produced by Eugene Jarecki (“Why We Fight”) and Nick Fraser (“Man on Wire”), this is a fascinating piece of work that approaches “Citizenfour” in its deconstruction of governmental failure and the systems underneath the war on terror that are not only failing to keep us safe but impacting the entire world political scene.

“(T)ERROR” began life when filmmaker Cabral discovered that her friend from her Harlem neighborhood, Saeed “Shariff” Torres, was an FBI informant. How did she learn this? He told her. And he even agreed to let her film the next sting on which he was dispatched. Shariff is like hundreds of freelance FBI informants, men and women brought in by the government to get close to potential terrorists, discover what they’re planning, and turn them in. These informants, who certainly don’t have bureau training, are getting close to people, forming friendships, and then betraying them. And anyone with a working understanding of human nature will be naturally concerned about the possibility of entrapment when working-class people are being paid by the government to build cases. Shariff is open and honest about his need to make ends meet, talking about how he wants to open a bakery, and how this will be his last sting.

Shariff’s latest assignment is to befriend a man suspected of being a Taliban sympathizer. We get little explanation as to why this man is a suspect other than a few Facebook posts, rumors, and an assumption that the FBI must have more information that they’re not sharing with Shariff or us. (We don’t hear much from the FBI, only in text form between Shariff and his bosses, in which he’s advised how to proceed with the “POI”—Person of Interest). We see Shariff’s attempts at friendship with the POI, even if he admits that he has nothing in common with the subject. We see him trying to get paid from the FBI for his work. And then the picture gets muddy.

Cabral and Sutcliffe reveal that Shariff was a part of a major case from years earlier, one in which a musician named Tarik Shah was convicted of conspiring to provide material support for terrorism. He has been serving a sentence since 2007. We meet Shah’s mother, who speaks of her son’s friendship with Shariff, and details exactly how he was put away. Let’s just say there are legitimate questions about how things happened, at least as presented in “(T)ERROR.” At the very least, we should question the veracity of terrorist threats that don’t really exist outside of a paid informant and his conversations with a friend.

For around 30 minutes, “(T)ERROR” is an interesting character study of a man with a fascinating story to tell. Shariff is a vibrant, interesting guy—the kind of person who probably knows most of the people in his neighborhood. He’s also, if you believe him and the FBI, on the frontlines of keeping us from the next 9/11. That story alone would have been an interesting one, but “(T)ERROR” takes a turn in the second act that deepens the entire piece, and Cabral and Sutcliffe don’t look back from there, painting a portrait of a system that is flawed at best, corrupt at worst, and deeply broken. Like Laura Poitras with “Citizenfour,” they are careful to let the story speak for itself, only layering on dispiriting statistics at the very end. Sutcliffe reportedly got involved after working on an hour-long film for PBS on a Muslim teenager falsely accused of being a suicide bomber. In the wake of 9/11, we all sought a greater sense of comfort and freedom from our fear. And yet that fear has led to dynamics like the one captured in “(T)ERROR,” a film that feels depressingly essential to understanding that just because we haven’t been attacked doesn’t mean we’re winning the war. 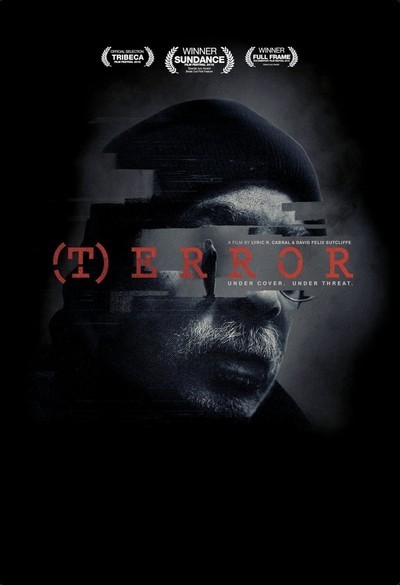