Though superlatives can mischaracterize any movie’s qualities, it is not an overstatement, I think, to call “Citizenfour,” Laura Poitras’ film about Edward Snowden, the movie of the century (to date).

That statement is meant, first off, to suggest certain things about its relation to our collective past, present and future. No film so boldly X-rays certain crucial changes wrought upon the world, and especially America and its government, by the terrorist attacks of September 11, 2001. No film so demands to be seen by every sentient person who values his or her own freedom and privacy. No film so clearly implies actions that need to be taken to prevent the 21st century from turning into an Orwellian nightmare in which technologically-enabled tyranny is absolute and true political liberty, for all intents and purposes, nonexistent.

This is not to say that “Citizenfour” is a perfect film, if anyone believes that such a thing exists. On the contrary, perhaps more than any documentary in history, it invites endless questions about what Poitras chose to put in and leave out, to emphasize and to elide. But such debates are only a secondary–if very fascinating–aspect of a broader national and international discussion that the film deserves to start. They do nothing to diminish its colossal importance.

Indeed, no film has ever been historic in quite the way this one is, since it tells a story in which the filmmaker and her work play a crucial part. It’s as if Daniel Ellsberg had a friend with a movie camera who filmed his disclosure of the Pentagon Papers every step of the way. Or if the Watergate burglars had taken along a filmmaker who shot their crimes and the cover-up that followed. Except that the issues “Citizenfour” deals with are, arguably, a thousand times more potent than Vietnam or Watergate.

The part of the film that shows Edward Snowden being interviewed in Hong Kong in June of 2013 (doesn’t it seem longer ago?) occupies roughly an hour in the middle of its slightly less than two-hour length. The film begins, eerily, like a latter-day “Parallax View,” with shots from a car moving through a dark traffic tunnel (in Hong Kong, it turns out) as Poitras reads emails she received from the then-anonymous Snowden. One says that he didn’t choose her for the work she is going to do with him; she made the choice through the films she previously made. A title says that after 2006 (when her Iraq film “My Country, My Country” came out) she was placed on a secret government watch list and thereafter stopped and searched dozens of times as she tried to enter the U.S. This harassment, she notes, prompted her to move to Berlin.

Although she doesn’t say it, Poitras was at work on a film about government surveillance before she first heard from Snowden, and some of that footage comprises much of the first half-hour of “Citizenfour.” We see journalist Glenn Greenwald, who will become part of the Snowden story, working at his home in Rio de Janeiro in 2012. We see Director of National Intelligence James Clapper and Director of the National Security Agency (NSA) Keith Alexander both lying to Congress–presumably under oath–about the extent of the government’s spying on American citizens.

But perhaps the most important part of this de facto prologue concerns William Binney, a government intelligence analyst who turned whistleblower to protest abuses he saw taking place in the government’s actions after 9/11. For his troubles, Binney was raided by FBI agents who stormed into his house with guns drawn. The examples of Binney and others like him of course indicate the ridiculousness of the claim–made by President Obama and others in the government and media–that everything would have been fine if Snowden had gone through “proper channels” to make his revelations to the American public.

After contacting Poitras via encrypted email, and later asking her to involve Greenwald, the still nameless Snowden–“citizenfour” is the first alias he uses–asks the two to go to New York and await further instructions. He then tells them to meet him in Hong Kong (which he has chosen thinking it may be further from the eyes of U.S. intelligence than other places).

In my view, the film’s single biggest flaw lies in not saying at this point that Snowden sent Poitras and Greenwald massive numbers of secret files concerning government surveillance, which they were able to peruse before meeting him. In any case, these materials formed the basis of stories the two wrote from Hong Kong, Greenwald for The Guardian, Poitras for The Washington Post. (An account of what Snowden sent the journalists can be found in Greenwald’s book “No Place to Hide,” which deserves to be read in tandem with “Citizenfour.”)

We do not see Poitras and Greenwald meeting Snowden in the lobby of Hong Kong’s Mira Hotel (Greenwald recalled they were stunned at how young he was), but within minutes of arriving in Snowden’s room Poitras has set up here camera and begun filming. True to her cinema verite ethos, the filmmaker mostly remains unseen and unheard, leaving the questioning to Greenwald, and, beginning on the second day, another reporter from The Guardian, Ewan MacAskill.

The hour we spend with Snowden and company is matter-of-fact and in some ways undramatic, yet it is one of the most absorbing things I’ve ever seen in a film. (Having now watched the movie three times, I found this segment even more riveting on the third viewing than on the first.) What grabs you here is not, of course, the contents of Snowden’s revelations, which have been widely reported. Rather, it’s the sense of watching a small group of individuals embarked on an enterprise that they know is of tremendous historical import, yet also potentially dangerous and with no guaranteed outcome. In such a context, every small gesture, pause and decision can seem to take on great meaning, creating a constant sense of tension and discovery.

Then there is the presence of Snowden. In the early stories Greenwald begins filing from Hong Kong, which create an immediate international sensation, he doesn’t identify his source, in part because Snowden says he wants the attention to go to the explosive materials he’s providing rather than to himself. Yet the attention must soon enough shift to him because, as he made clear to Poitras early on, he intends to identify himself publicly and take whatever consequences may come, hoping he will thereby inspire others to do the same. So, a few days into their meetings, Poitras films a 12-minute interview with him, which is released to the media, and almost instantly Snowden’s face and name are known all over the globe.

Through all of this, the man himself remains a picture of remarkable calm, poise and good spirits. In his book Greenwald says he was so excited in Hong Kong that he couldn’t sleep more than two hours per night, and thus could only marvel at Snowden’s ability to turn in at 10 p.m. for exactly seven and a half hours of sleep.

Such details are significant because, in one sense, the real drama in “Citizenfour”–and it’s something no book could give us–lies in our observing Snowden and coming to our own conclusions about his character and motives. No doubt the movie will inspire various reactions. For myself, I take the guy at face value. He seems eminently sane and decent, a good guy, smart, articulate, good-humored and, given the circumstances he’s brought upon himself, incredibly courageous.

As for his motives, it befits his status as a millennial that he’s passionate about the potential of the Internet and the dangers of its abuse. Like Greenwald and Poitras, he is also alarmed at the power the government has accumulated to spy on its own citizenry virtually without limits or controls, and without the country’s knowledge. He says, in his usual rather formal way of speaking: “I am more willing to risk imprisonment, or any other negative outcome personally, than I am to risk the curtailment of my intellectual freedom and that of those around me, whom I care for equally as I do for myself.”

After eight days, Snowden leaves the hotel with the help of Chinese human rights lawyers and decamps to a U.N. facility and then a safe house. We see him thereafter in only two scenes somewhat later in Moscow, whence he is spirited with the help of WikiLeaks, and where the government eventually grants him one year of political asylum.

In the film’s last half-hour, Poitras gives us an almost impressionistic chronicle of events flowing from Snowden’s revelations, including Greenwald in Brazil talking with reporters and government people about U.S. spying; William Binney and others testifying on the same subject in Europe; lawyers meeting pro bono to discuss legal strategy for Snowden; the bizarre detention of Greenwald’s partner in London and their reunion in Rio.

And then there’s the film’s final scene, in Moscow, where Snowden and Greenwald write notes on paper in order to avoid talking about another, newer whistle-blower. We can’t see what they’re talking about but Snowden’s astonishment speaks volumes. The scene is sure to cause puzzlement and perhaps controversy, yet I found it really wonderful, poetically mysterious yet also returning us to Snowden’s clearly stated desire to inspire others to follow in his footsteps.

No movie has ever been more justified in including “citizen” in its title, and I’m not speaking of just the acts of heroic citizenship by Snowden, which deserve to be studied and emulated for centuries. The bleakest implication of the film is that every government soon swallows up those who enter it and squelches the impulse for meaningful dissent. Why has no member of Congress risen to defend Snowden, who is a hero to much of the country and will be more so once this film is widely seen? Why have the governments of Germany and Brazil, two powerful nations outraged by Snowden’s revelations, not offered him asylum?

Changing such things, the film very clearly implies, will depend on citizens willing to challenge the power of their governments. Throughout their activities, Snowden, Greenwald and Poitras took a gamble on practicing exactly the kind of transparency and straightforwardness in their work that they want to see in the government. The idea being that the more in the public eye they were, the more protected from nefarious doings by the government. It has worked, obviously…but only to a point. Snowden’s revelations got out, but what has become of them? It is to be hoped that “Citizenfour”–as it rolls out into theaters in the next months, screens on HBO and goes to the Oscars–will reignite debate and action on all the appropriate fronts. 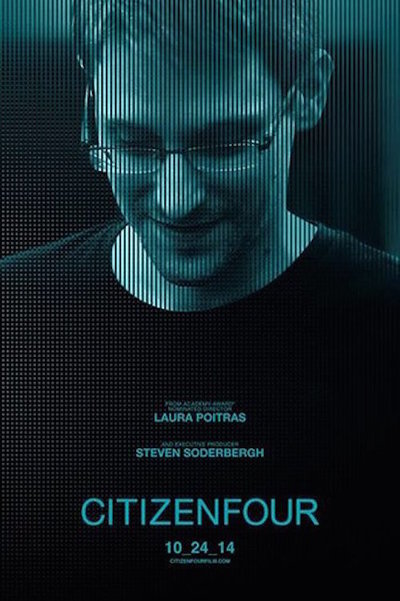