“Taps” is a meditation on two subjects for which some adolescents have a great capacity: idealism and authoritarianism. It takes place in a realistic setting (it was shot on location at Valley Forge Military Academy), but it is not intended as a realistic film. There are all sorts of clues, including the pointed absence of all but one of the academy's adult faculty members, to indicate that TAPS, like the emotionally similar “Lord Of The Flies,” is using its realistic texture as a setting for a fantasy about human nature.

The film begins with an emotionally stirring commencement exercise at Bunker Hill Military Academy (as the school is called in the film). Sousa marches fill the air, the cadets march around the parade ground looking gloriously proud of themselves, and the reviewing stand is dominated by the legendary old General Harlan Bache, the academy's commander. Bache is played by George C. Scott, and it is probably no accident that his performance in this movie echoes his title role in “Patton” (1970): He is an iron-willed and yet incurably romantic professional soldier.

We soon meet the leading upperclassman, Brian Moreland (Timothy Hutton). He has been selected to lead the cadet corps next year. In one of the most important evenings of his life, he is granted the great privilege of having dinner with old General Bache and sipping some of the old man's brandy. Soon after, however, this whole network of discipline, glory, and tradition is destroyed when it's revealed that the school's pigheaded trustees intend to sell the school and its land to some condominium developers (it is almost worth the price of admission to hear Scott pronounce "condominiums"). Bache is removed from the scene, in a dramatic development I will not reveal. And then Moreland, the cadet commander, takes inventory of the school's supplies of weapons and decides to lead the student body in making a stand for it. They'll take over the school in a military occupation, bar the gates, mount machine guns, and guard posts, and issue a set of demands designed to save the school.

The central passages of “Taps” are devoted to this scheme. The students barricade themselves in the school grounds, the police and National Guard surround the school, and a standoff develops. Meanwhile, within the student body, tensions develop between those kids who are unstable and a little too violent, and those who would secretly rather be on the outside looking in. Hutton, as Moreland, does a lot of learning and soul-searching as he tries to hold his mad scheme together.

There are obviously various problems of plot (such as: Where are the other faculty members? Why are the outside authorities both so stupid and so uncompromising? Why would the trustees have no appreciation of the school's tradition? Why would the grade-school-age cadets be issued live ammunition?, etc.). These questions do not really matter. “Taps” is basically a character study, a portrait of the personalities engaged in the showdown. And, like “Lord Of The Flies”, it observes that adolescent males can easily translate the idealistic lessons they have been taught into a rationale for acting in ways that are rigid, dogmatic, and self-justifying.

“Taps” works as an uncommonly engrossing story, primarily because the performances are so well done. All of the cadet roles are well acted, not only by seasoned actors like Hutton (who won an Academy Award for “Ordinary People”) but even by the very young kids who struggle with guns and realities much too large for them. By the film's end, we share their love for their school, we despair at the situation they have gotten themselves into, and we are emotionally involved in the outcome. After the film, there are some ideas to think about, involving the implications when might and right are on the same side--and when they are not. 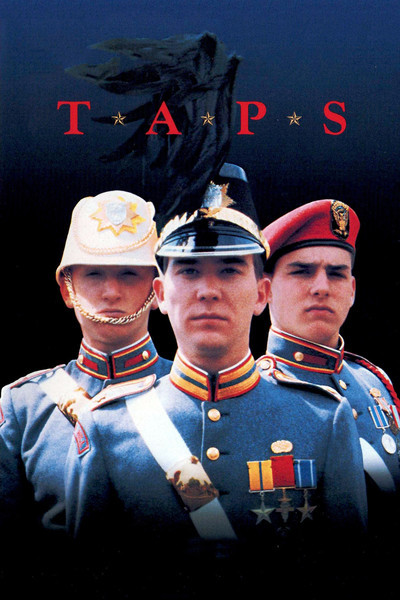