The character of Ray Moody in "Take Me," played by character actor Pat Healy (in his directorial debut) is made up of equal parts blankness, desperation and fragility. He wears a thick toupee, making him look like a cable-access game-show host. He appears to not know how fake it looks. Ray Moody is an "entrepreneur." On his wall is a collage of Polaroids showing his happy clients. Moody runs his own business called Kidnap Solutions. He is hired to abduct people and scare them out of intractable personal problems. It is Moody's "job" to give them a fully realistic simulated experience. Produced by brother Jay and Mark Duplass, "Take Me" is not what it initially seems to be—a character study of a sad-sack creep. What it really is is a screwball comedy with a black-hearted center, an energy extremely difficult to capture and maintain, but Healy—as actor and as director—manages to do so. The beginning is a little bumpy, but once the main event starts up, the film settles into its sustained mood of horror and hilarity.

The opening scene of "Take Me" shows Moody applying for a bank loan, describing his business to a horrified loan officer. He keeps calling her by her first name, a sales tactic he probably read about in a self-help book, but when he does it it just seems creepy. No matter his good intentions, his enthusiasm, Ray Moody always just seems creepy.

A major client enters the picture. A woman named Anna St. Blair (Taylor Schilling) calls him and says, in a femme fatale voice, "I have a fantasy. I want to disappear." Anna makes some extreme requests. She wants to be slapped. A couple of times. Moody is somewhat alarmed by this. His business isn't about sexual kink. It's about helping people stick to their diets, or get over broken hearts. He's a helper, not a sexual sadist! But she offers to pay him $5,000, and he can't refuse. He begins his meticulous preparation: stalking her, spying on her, getting to know her routine. He then abducts her, and ties her up in the basement of his house, where all of his "simulations" occur.

Anna, from the get-go, is more than Moody bargained for. She pleads for her life, she screams, she fights back. Moody wonders if maybe ... she misunderstood their initial agreement? Or did he misunderstand? None of it goes down as Moody envisioned it. He struggles to keep control of the event.

"Take Me" could work as a play, since it only features two characters in two locations (he eventually moves her out to his family's empty summer house). It's an extended screwball situation, involving two kooky people having a terrible shared adventure, rife with misunderstandings, mistaken identities, possible police involvement, physical stress ... all of the things that make up your classic screwball. Screwball, a precious genre, is practically a lost art. "Take Me" has some similarities with Charles Hood's 2015 film "Night Owls," an extremely entertaining story about two people holed up in a house, one against her will. Like "Night Owls," "Take Me" has two extremely talented actors playing out their chemistry and hostility and vulnerability, moment to moment to moment. You never know how it will turn out.

For all its lunacy and chaos, screwball requires a delicate touch. It's situation-based, for the most part, but it requires more than just "situation," it needs engagingly absurd characters. "Take Me" presents a truly horrendous story, if you think about it for more than five seconds, even if Anna St. Blair signed up for it. The film lives or dies on the chemistry of the two actors, and Healy and Schilling are so good together that the film appears to almost play itself (quite a feat). With an extremely funny script by Mike Makowsky, "Take Me" rides the waves of a simulation scenario gone haywire.

Taylor Schilling (mainly known for her role on "Orange is the New Black") is a true screwball actress. Blonde and leggy and beautiful, her line-readings are so specific and unexpected that sometimes it takes a second for their humor to even land. There's one moment where she screams in terror as he drags her towards the stairwell that is so funny it almost single-handedly creates the tone of the film. Her onscreen personality here is reminiscent of Goldie Hawn, the Hawn of "Seems Like Old Times," "Foul Play," "Private Benjamin." Like Hawn's humor, Schilling's is both subtle and broad, her confrontations with absurdity and loss of control glimpsed in a flutter of the eyelid, a quick side-eye, a sudden explosion of energy. She's a delightfully loopy screen presence. Moody's nuts, but Anna, possibly, is certifiable.

The fun of "Take Me" is watching these two actors go toe-to-toe in scene after scene. Healy knows that as a director. His approach is simple, unadorned, and gets the job done. This is a compliment. Screwball is hard. You have to know what you're going for and how to get there. Healy does. 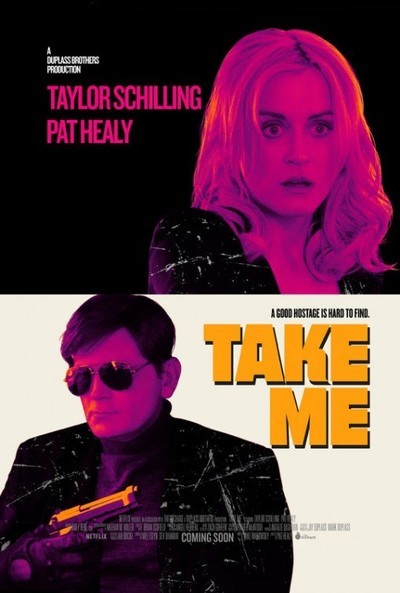