Howard Zieff's “Private Benjamin” is an appealing, infectious comedy starring Goldie Hawn as Judy Benjamin, a Jewish-American princess, breathless with joy on the day of her second marriage. She has a real catch: He's named Yale, he's a professional man, he wants his study done in mushroom colors. Alas, he dies in the throes of passion on his wedding night (something his grieving mother discovers when Judy solemnly repeats his last words). And Judy goes into mourning.

What's she to do? She calls in to an all-night talk show and is promised a solution by another caller. The next day, we meet the guy with the answer. Played by Harry Dean Stanton, that wonderful character actor who could be Robert Mitchum's sneaky cousin, the guy turns out to be an Army recruiter. And he solemnly paints a picture of Army life that has Judy signing up. Her subsequent shocks of discovery provide the great laughs of the movie's best scenes. She solemnly explains to a captain (Eileen Brennan) that she did sign up with the Army, yes, but with another Army. Where, she asks, are the private condo living quarters the recruiter promised her? And surely the Army could have afforded some draperies? In no time at all, she's cleaning the latrines with her electric toothbrush.

This is an inspired idea for a movie comedy, and Goldie Hawn has a lot of fun with it. She finds just the right note for her performance, poised halfway between the avaricious and the slack-jawed, the calculating and the innocent. She makes some kind of impression on everyone she runs up against (or into), especially Robert Webber as the square-jawed Colonel Thornbush, commander of the Army's elite paratroop unit, the Thornbushers.

It's at about this point that the movie seems to lose its unique comic direction and turn into a more or less predictable combination of service comedy and romantic farce. After Judy's parents try to rescue her from the Army, she suddenly decides to stay and stick it out. She turns into a passable soldier. She almost inadvertently captures the entire Red team and makes them Blue prisoners of war during war games. And she is invited to join the Thornbushers by Colonel Thornbush himself (who turns out to have an alternative in mind if Judy doesn't want to jump at 13,000 feet).

Along the way, she meets a sexy and eligible French bachelor who's a gynecologist. After she blackmails Thornbush into sending her to Allied Army headquarters in Paris, she falls in love with the Frenchman (Armand Assante), and gets involved in Gallic romantic intrigues. It turns out that her would-be third husband is more interested in Sunday morning soccer games and cute little downstairs maids than in the kind of marriage Judy Benjamin was brought up to desire.

This stuff is occasionally funny, but it's kind of predictable. It turns “Private Benjamin” into areas that are too familiar: We've all seen the comic situations that grow out of the courtship with the Frenchman, and we'd really rather have seen more stuff of “Private Benjamin” in the Army. The movie would have been better off sticking with Goldie Hawn as a female Beetle Bailey and forgetting about the changes that allow her to find self-respect, deal with the Frenchman, etc. Still, “Private Benjamin” is refreshing and fun. Goldie Hawn, who is a true comic actress, makes an original, appealing character out of Judy Benjamin, and so the movie feels alive, not just an exercise in gags and situations. 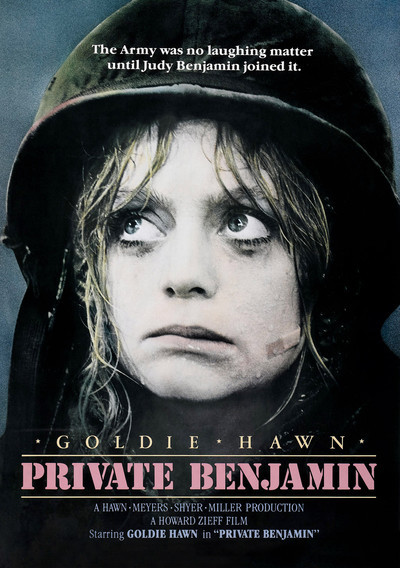