Director Naomi Kawase is a Cannes Film Festival favorite whose work rarely reaches American shores. Since 1997, four of her films have competed for the Palme d’Or, and she has won the Golden Camera and the Jury Prize. Her latest film, “Sweet Bean," which competed in last year’s Un Certain Regard section at Cannes, is getting a bigger U.S. release than any of her prior work, and it’s easy to see why. This is the kind of film that wins festival audience awards—a gentle, unassuming work that's simple, emotional story has the potential for arthouse sleeper status.

“Sweet Bean” doesn’t go anywhere the viewer isn’t expecting, but I did not mind taking the trip. It’s a movie about food and the joys of a good day’s work, two of my cinematic sweet spots. I love watching people do their jobs onscreen, and I’m always hungry. There’s a special cinema subgenre that caters to moviegoers like me, the foodie movie. Films like “Babette’s Feast” and “Big Night” represent the high-water mark, while the recent Bradley Cooper vehicle “Burnt” languished near the bottom. “Sweet Bean” falls somewhere in the middle, though it gets extra points for evoking memories of “Big Night's" classic omelette-making final scene.

Sentaro (Masatoshi Nagase) runs a small dorayaki shop, where he cooks the pancake-based snack for a small group of schoolgirls who frequent the establishment. Dorayaki are a sandwich-like treat made of two pancakes held together by a large dollop of an, the sweet bean paste of the title. Sentaro rises early to create the perfectly shaped tiny pancakes he uses for his dorayaki. Any rejects that do not meet his criteria become “discards” that he hands out for free. The camera treats Sentaro’s griddle work like a sacred ritual; it lovingly ogles each measured spoonful of batter hitting the grill. We drool.

One of the schoolgirls, Wakana (Kyara Uchida), inquires about the Help Wanted sign in the shop’s window, a sign that doesn’t seem necessary given the small customer base. Her competition for the job is Tokue (Kirin Kiki), a senior citizen who stops by the shop to sample Sentaro’s wares. A 50-year veteran of making dorayaki, Tokue offers up a valid criticism: the pancakes are good, but the an is sub-par. Her expert palette is insulted further when she discovers Sentaro’s an comes from the supermarket. She demands that Sentaro either make the an from scratch, or hire her to do it for him. When he declines her help, Tokue drops off some of her homemade filling. Sentaro tries it, and is so stunned by its flavor that he hires her.

Word of mouth is also the catalyst for the film’s dramatic conflict, which I’ve purposely avoided discussing until now. This plot development is not really necessary, as "Sweet Bean" could have framed its message of tolerance within the confines of the store and the personal dynamics of the three generations represented by Wakana, Tokue and Sentaro. By adding a secret life for Tokue (which the film reveals early on, but I’ll not spoil) and a tragic final section, “Sweet Bean” makes a blatant leap for the heartstrings that feels too heavy-footed for its delicate construction. Admittedly, some of these scenes are moving, but often the sentiment feels laid on as thick and chunky as Tokue’s bean paste.

Kawase favors close-ups and medium shots of her actors and the action, creating an intimacy upon which her lead actors thrive. Kiki, Uchida and Nagase bring a wealth of subtle emotion to their thinly drawn characters, and it registers on their faces and in their body language. One scene in particular stands out, and if you blink you might miss it. When Tokue is offered the job, Kiki silently plays this beautiful moment of fulfillment. She lights up with a newfound sense of purpose, and in that brief instance, you know all you need to know about her character’s soul.

Kawase depicts the passage of time with beautifully shot changes of season, bookending the film with the vivid cherry blossoms of Spring. When “Sweet Bean” is leisurely coasting along like this, one can easily get lost in its meditative pull. I found enough of that to forgive the film its trespasses. “Sweet Bean” may be as overly sweet as dorayaki, but like that treat, it hits the spot if that is what you crave. If you go to see it, take your Nana, because this film will make you think of her. 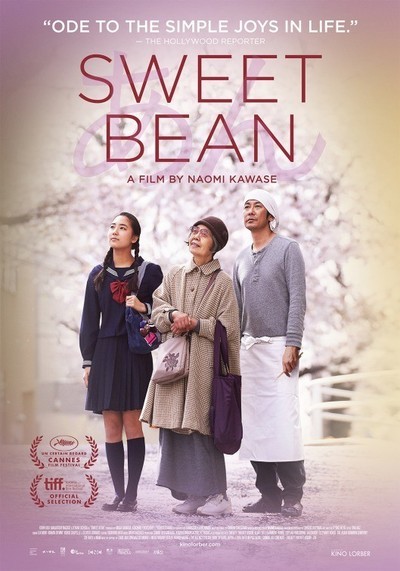