Heavy on beautifully-lit tight shots of blue burner flames, immaculate china plates, various foams, glazes, char marks, roots, zests, and all other manner of mouth-watering visuals for discriminating gourmands (the consultant on kitchen matters was pioneering chef Mario Batali, a bonafide kitchen genius), “Burnt” concentrates on the fashionable high-end of gastronomy. Cooper’s character, Adam Jones recounts in voice-over that he’s been doing penance for unspecified sins by shucking oysters in New Orleans … and, once he’s gotten to one million, boom, suddenly he’s in London, making snide comments to hotel restaurant maître d' Daniel Brühl about the mediocre quality of his fare. Adam isn’t just in-person trolling fancy joints in this big, you’ll excuse the word, foodie town. No, Brühl’s Tony shares a past with Adam. Although London’s a big town, the fact that Adam can’t turn a corner without running into someone from his past makes the place seem like one of the backstage areas depicted in the recent Steve Jobs movie. Why, here’s Omar Sy’s Michel, who Adam pranked most heinously in Paris back in the day. And here’s Uma Thurman’s Simone, a restaurant critic Adam once dallied with against her better judgment, not just because Adam’s a bad egg, but because Simone herself is a lesbian (that’s JUST how much of a bad egg Adam really is). Adam also meets, and alienates, a few newbies: Sam Keeley’s eager young chef cadet David, upon whose couch Adam imposes, and single-mom sous-chef Helene, who is a single-mom sous-chef played by Sienna Miller, so take a wild guess.

“Burnt” is yet another redemption story of the Destructive Genius, whom the audience is supposed to be compelled to like in spite of himself, and who begins his journey with a list of things he’s not supposed to indulge in (in this case—surprise—it’s booze, drugs, and women). Then, the narrative bends circumstances to allow the Destructive Genius to get at least one of those things (take a guess…could it be a…single mom sous-chef?) and pull off a triumph, also in spite of himself, but with the assistance of a Crucial Teachable Moment.

"Ugh," one might say, and one might have a point. One doesn’t know if it’s better or worse that the whole scenario is polished with the sheen that I once called the Weinstein Tradition of Quality, back around the time of “The Cider House Rules,” I think. Miramax Films may no longer exist, but under their Weinstein Company rubric, Harvey and Bob Weinstein continue to make, albeit with somewhat less frequency than they used to, Miramax-y product. Miramax-y product did/does have its virtues, however, and since John Wells is a director of some conscience and screenwriter Steven Knight is in fact capable of first-rate work, “Burnt” packs some minor surprises and attractive details along its way—one sequence in which David draws an analogy between Michelin book stars and “Star Wars” heroes is funny and apt—and shows a certain amount of restraint when the inevitable triumphant note is struck.

There’s also the cast. If you’ve got any use for Cooper at all you’ll be rather taken with him here. He gets to speak French, throw his own version of a Gordon Ramsey-style fit (many times, even), and does some serious twinkling when it’s time to exercise the charm. The movie goes up several notches in quality every time Emma Thompson, as a sagacious therapist, turns up. Miller is tops, Sy is terrific, Brühl does quite well, particularly after his character is given a little revelation of his own, and Alicia Vikander makes a strong impression, as she does, in a very brief appearance. I have made a sacred vow to myself not to use the phrases “hungry for more” or “empty calories” in what they call the “kicker” of my review, so forgive me if I end it on the abrupt side. Like so. 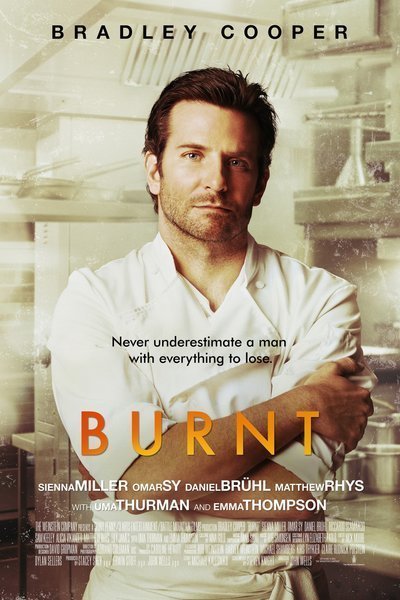