The eerie detachment, the kitschy interiors, the lurid use of color, the ominous synth score.

There’s more than a hint of David Lynch’s signature noir aesthetic in “Superior,” the feature filmmaking debut from director and co-writer Erin Vassilopoulos. Her story even explores the undercurrent of danger running just below the placid surface of small-town America, Lynch’s preferred playground. But while “Superior” has a rich style and a couple of intriguing ideas, it ultimately doesn’t add up to much, leaving you with the feeling that you’re watching an inferior homage.

Identical twin sisters Alessandra and Ani Mesa play identical twin sisters Marian and Vivian Rivera. At the film’s start, they’ve been estranged from each other for six years, but a cross-cut opening sequence reveals that they’re about to be reunited. Marian is a troubled blonde rocker on the run from an abusive boyfriend (Pico Alexander); Vivian is a proper brunette housewife trying to get pregnant with her boring husband (Jake Hoffman). Both women are stuck in their respective situations because the men they chose turned out to be horrible. But when Marian shows up at Vivian’s home, with its faded, pastel color palette and drab, plush carpeting, rekindling their cosmic connection provides some hope.

The notion of identical twins swapping identities and lives for comedy, melodrama, or both isn’t exactly a novel one, but it’s the best one we’ve got in the script from Vassilopoulos and Alessandra Mesa, based on the filmmaker’s 2015 short of the same name. At first, they do it for a mundane reason: Vivian agrees to cover Marian’s shift at the ice cream shack in their upstate New York town, where she’s working to help chip in around the house. (Stanley Simons brings some much-needed energy and sweetness to the film as Miles, the stoned gamer whose family owns the store.) But as the two begin to resemble each other again, with matching bob haircuts and deep-red, pussy-bow blouses, their find themselves in darker territory.

There’s some genuine tension in the possibility of mistaken identity, as well as an unexpected sense of liberation. Will Vivian-as-Marian get to continue enjoying her newfound sense of purpose scooping mint chip cones to teenagers? Will Marian-as-Vivian have to sleep with Vivian’s husband because her sister is ovulating? But far too many scenes drag on with little energy or spark—and that includes many of the interactions between the Mesa sisters themselves. Both give stiff performances for the most part, which has to have been an intentional choice to create an unsettling mood. It ends up having the opposite effect. There’s so little to these characters beyond a few superficial traits (one smokes, the other doesn’t) that whatever evolution they experience is meaningless. The idea that Marian and Vivian might share a psychic bond emerges but quickly disappears. And the fact that “Superior” takes place around Halloween does little to heighten the suspense; the time frame almost feels like an afterthought.

And yet, the film is always fabulous to look at—so much so that it keeps you hanging on, hoping that something thrilling or surprising will happen. A team of talented women behind the scenes contributed to its vivid, retro-chic vibe, including cinematographer Mia Cioffi Henry, shooting in grainy 16mm; production designer Maite Perez-Nievas; costume designer Allison Pearce; and composer Jessica Moss. The calendar on the kitchen wall says October 1987, but there’s something out of time about “Superior” that puts you in a confused mood from the start. Everything feels about a decade behind, as if these sisters are wading through the fog toward the brighter future that might be waiting for them. By the end, though, it’s hard to care whether they get there. 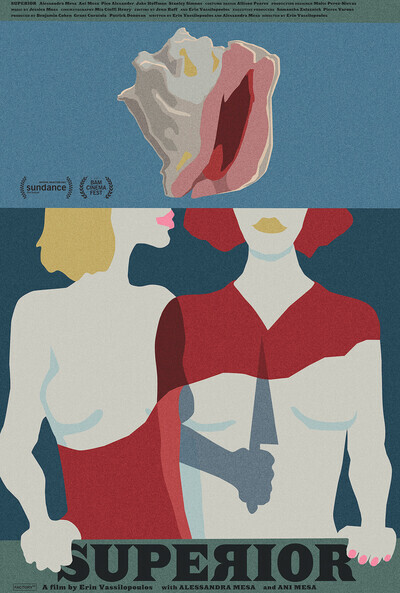