As “Summer of 85” opens, our narrator, 16-year-old Alex (Félix Lefebvre) expresses an interest in death “with a capital D.” His voice sounds disinterested, which is the first sign of trouble as we have to listen to him for the entire movie. The second sign of trouble occurs when Alex warns us that we might want to stop watching. The film is less than two minutes old when he effectively sums up this review. “If you don’t want to hear about a corpse I knew when it was alive,” he says, “and how he became a corpse, you’d better stop right here.” I wish I had listened. This is supposed to be some kind of tragically romantic coming-of-age gay love story that ends up in a courtroom, yet our tour guide refers to the object of his affection as “a corpse.”

This laughably "edgy" dialogue is supposed to intrigue us. Is Alex a murderer? Director François Ozon repeatedly flips back and forth between the love story and the trial preparation, undercutting the small fractions of momentum he achieves in either storyline. I assume Ozon’s source material, a YA novel by Aidan Chambers, has a better framework. If nothing else, the director should have kept Chambers’ title, Dance on My Grave, as it refers to a disastrously rendered climactic event that should cause Rod Stewart to sue the film’s choreographer. According to the theory of Chekhov’s Footloose, if someone asks their lover to dance on their grave in the first act, a grave must be boogied on in the third.

Before shuffling off this mortal coil, the deceased was an 18-year-old named David (Benjamin Voisin). He’s first seen saving Alex from a capsized boat before taking him home to dry off. David’s newly widowed mother, Madame Gorman (Valeria Bruni-Tedeschi) strips his new friend, commenting on his junk before forcing him into the tub. “All David’s capsized friends get a bath,” she says, implying that this is a common occurrence. Madame G. constantly refers to David’s need to have “friends,” and since this takes place in 1985, this is as gay-friendly as any adult is going to get. Alex’s own father is so homophobic that he has disowned his own brother.

Alex starts working in the Gorman store, in part because he needs the money but mostly to be closer to David. The two start a sexual relationship. As in “Call Me By Your Name,” this film shies away from any sex scenes. The two lounge in their post-coital bed and recite poetry taught to them by Monsieur Lefèvre (Melvil Poupaud), the literature teacher who also figures in the present day story as an influential figure in helping Alex make his plea before the court. Lefèvre also sleeps with his students, a detail dropped so nonchalantly I guess I’m supposed to ignore it. A more pressing detail is David’s demand that he and Alex take an oath that, if one of them should die, the other should dance on his grave. This doesn’t sound romantic to this sentimental fool, but what do I know? Marilyn once sang “the French are glad to die for love.” I’ll take her word for it.

Of course, Alex and David must have a falling out. It’s clear from the opening that this is a doomed romance, but we must wait over an hour to find out that the cause of this undoing is a woman, Kate (Philippine Velge). She’s a Brit spending time in France to immerse herself in the French language. She speaks it pretty well, and she’s a looker so she catches David’s eye. This makes Alex extremely jealous, leading to the aforementioned death that he writes about as part of his court plea. It also leads to a scene involving jumping on a dead body while dressed in drag, and the aforementioned graveyard musical number where Alex jumps around as if someone dropped a high voltage wire down his pants.

The overly bright and pretty cinematography by Hichame Alaouie looks like an Abercrombie and Fitch catalog. Even when we’re supposed to feel concerned for Alex’s sanity, the movie looks shiny and happy. The only effective visual moment occurs at a dance party where David puts headphones on Alex’s ears so that only he can hear Rod Stewart’s “Sailing.” The film continues to play around him as folks dance to the music we no longer can hear. This disconnect isolates Alex from the action, giving a visual interpretation of him falling in love. It’s the only time in “Summer of 85” that I was convinced of this relationship between two exceptionally creepy, death obsessed kids. When “Sailing” gets a reprise during the climax, it ruins any magic its prior appearance generated.

“Summer of 85” plays like a bad parody of movies like “Love Story” and “Summer of ’42,” stories where some undeserving male learns a valuable lesson from a love affair and death. I sense that Ozon has the same disdain for stuff like this that I do. Because the lesson Alex learns from David’s untimely demise is that death (with a capital D) is a great catalyst for a writing career with a capital C. Getting to this tacky denouement takes 100 excruciating minutes. 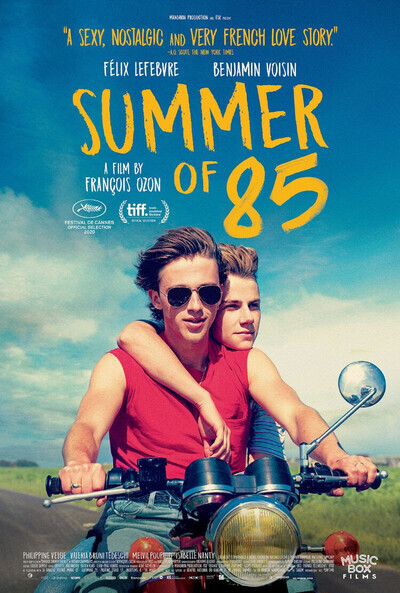 Writer (novel, "Dance on My Grave")