There are moments during this picture, adapted by writer-director Robert Levine from the novel Blue Angel by Francine Prose, that crackle with the kind of adult dramatic tension and life that could belie the old saw about how they don’t make movies for grownups anymore.

In particular, there’s an abortive sex scene between two characters that begins with one becoming suddenly, and to the male character, miraculously, naked, after which a chipped tooth puts the kibosh on the whole encounter and the female, strangely triumphant, parades around her dorm room in a posture of triumph while the humiliated male pulls his pants back up. It’s a triumph of staging and acting that nails a particular form of humiliation in a way that only cinema can.

What’s wrong with other sections of “Submission” is that it gets lured back to its literary source, and does things in a literary way. The movie’s about a not-entirely failed novelist, Ted Swenson, played by Stanley Tucci. As Ted puts it in the narration of the opening scene, “I’d been touted as a novelist to watch; little did I realize that that christening would turn into my eulogy.” Now a tenured creative writing teacher at a prim Vermont college, he’s cynical about his teaching responsibilities and his students. Not even halfway through the semester and he’s got three stories about bestiality to deal with. But then Ted asks for a story from the shy Angela (Addison Timlin), who seems kind and self-effacing. And who not only tells Ted about her love for his novel Phoenix Time but also drops the name of Stendhal. It’s lit-dude catnip!

As is Angela’s own manuscript, for a novel, no less, called Eggs, about a young girl who has an affair with his teacher. Despite being happily, and lustily married to wife Sherrie (Kyra Sedgwick), Ted experiences “Because I Can” temptations concerning infidelity, and he quite stupidly gives into them. And he is then caught in an increasingly nasty … what’s the term? ... "honey trap"? Only there’s about a hundred times more trap than honey.

The problem with the movie isn’t that, during our current #metoo moment, it takes a male’s side in a sexual harassment tale. Francine Prose is that most rare of contemporary writers: a provocateur who’s pointedly smart about flipping certain scripts. She gets human behavior, and in the movie’s best moments so does director Levine. And the actors sure do. Tucci is wonderful, but Timlin comes close to eating him up almost as thoroughly as her character does his.

Where the movie wobbles is in expecting dialogue that may look well enough on a page to sound normal coming out of a human being’s mouth, as when Ted’s editor (Peter Gallagher) tells Ted that a memoir he wants Ted to do would have “the juicy gleam, the bloody smell of truth.” Um, ick. “Submission” has a sufficient number of such awkward bits to make it a not-quite ideal movie for grownups. 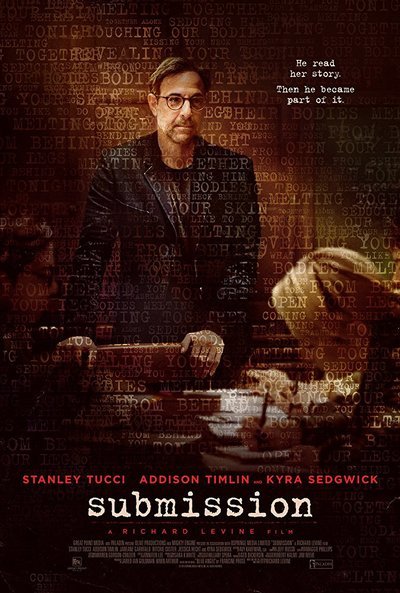