"Submergence" is based on a rapturously reviewed novel by J.M. Ledgard, about the love affair between a biomathematician named Danielle Flinders, who is fascinated by life at the darkest levels of the ocean, and James More, a Secret Intelligence Service agent who poses as a water expert in order to gather evidence on Al Qaeda in Somalia. The story is built around a multilayered consideration of words like "submerged," "depths," "darkness" and "light," illustrated by divergent sections in which Danielle explores the ocean floor in a submersible while James is kidnapped, held in solitary confinement, and tortured by Somali radicals. Adapted by Eric Dignam and directed by legendary German filmmaker Wim Wenders, of "Paris, Texas" and "Wings of Desire," the movie version seems to want to be a contemporary answer to an Anthony Minghella movie like "The English Patient" or "Cold Mountain," taking a star-powered romance between beautiful people who wear beautiful clothes and move through beautiful settings—i.e., the kind of escapist melodrama that Hollywood was pretty much invented to make—and wreathing it in qualities that are more characteristic of art house films with Big Themes.

There can be something questionable, maybe self-defeating, about that approach, but there's no denying that when the movies are well-done, the tensions between its base pleasures and intellectual complications can be fascinating. This is not a particularly fascinating movie, unfortunately, despite being well-done in most of the superficial ways.

Alicia Vikander, who seems to be turning into a contemporary Audrey Hepburn a bit more with each new project, plays the scientist Danielle, and James McAvoy is James, the secret SAS officer posing as a water expert. They meet at a luxurious (though intimate) resort in Normandy, fall immediately in love after a bit of teasing banter, then are forced to separate and go off to fulfill their respective missions. And it's here that the film becomes more intellectualized and abstract, juxtaposing Alicia's research and James' imprisonment and humiliation, cutting carefully from one to the other (as if they were Odysseus and Penelope), and drawing analogies between, say, the emotional and philosophical darkness of a jail cell and the ocean floor with the light, or "light," of the Atlantic's surface, or the notions of religious transcendence discussed by James and the captors who are trying to break him.

Wenders, who is known mainly for brainy, often woozy dramas and empathetic documentaries about subcultures (including "Buena Vista Social Club"), is good at giving Vikander and McAvoy the old fashioned movie star treatment. Her poise and beauty have already been well-established in other films, but it's a surprise and a treat to see McAvoy, more of a character actor, going full-on James Bond here, playing a strong-silent type with an intellectual streak and showcasing a chiseled torso that looks like it was purchased through hundreds of hours at the gym and a year-long diet of fish and rice.

The actors carry what often amounts to a two-person show. Wenders and his cinematographer Benoît Debie showcase their perfect skin and hair and pleasing smiles as they canoodle in bed, walk on the beach, and discuss thematically germane subjects. (He asks her what her favorite body of water is, and she says the Atlantic Ocean; she asks him the same question, and he names the human body.) They're great to look at and listen to. So is the movie, which never met a landscape or building that it couldn't photograph as sensually as a nude, and backs its action with Fernando Velazquez music that suggests a John Barry score for a nonexistent film in which 007 enters rehab.

The net effect is to make the source material seem airy and pretentious, and the film somewhat self-loathing, as if it can't quite bring itself to be the thing that it's naturally inclined to be: an escapist swooner about gorgeous people finding each other and then being pulled apart. This description is probably unfair, I know: I haven't read the novel. But my experience with other works in this vein (such as certain books that the late Anthony Minghella adapted) has taught me that certain notions that would seem to be irreconcilable on the page work just fine when writers are in total command of their style and subject. Here, however, you may feel as if you're trapped at a party, talking to somebody who seemed like a charmer but mainly wants to unload on you. The actors and the filmmaking are seductive enough that "Submergence" isn't a chore to sit through, but it's not engrossing, either. 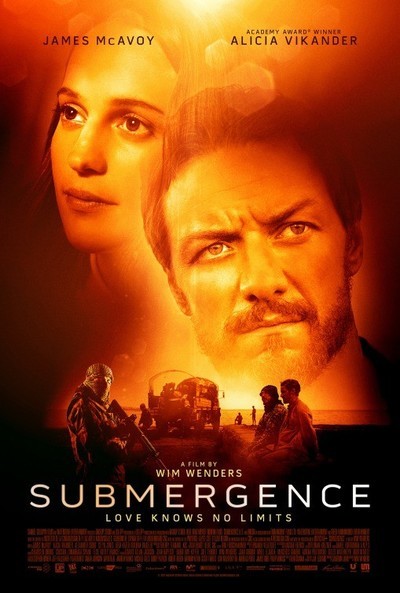