"Stung" is the worst kind of neo-exploitation film: the kind that encourages you to root for a good guy who is essentially a man-child until crisis mode kicks in, and he abruptly becomes Badass Grownupman. The crisis in question is a sudden onslaught of seven-foot-tall wasps, an occasion that heroic slacker Paul (Matt O'Leary) rises to with inexplicable alacrity. Paul is as bland as any of the film's other protagonists, but what's really nettlesome about Paul's milquetoast nature is that the film keeps insisting that he deserves success. There's a weird rom-com for dudebros sub-plot running throughout "Stung" and it makes the film's underlying message appear surprisingly insidious: to get the girl, you have to magically transform into a survivalist wet dream, and fight a horde of Shaquille O'Neil-sized mutant insects. Get in line, fellas, this movie's got life lessons to impart!

Meet Paul, the audience surrogate for the duration of "Stung." Paul is a stereotypical "nice guy" as we find out in the film's opening scene when he struggles to flirt with Julia (Jessica Cook), his boss and the owner of a small catering company. Julia, a stressed-out working girl who worries about the future of her company, doesn't like Paul's loud music, doesn't leap for joy when Paul asks if she likes pot, and doesn't just, like, chill out when she's alone with Paul. Also, she spills coffee on her hoodie, and naturally has nothing but a sports bra on underneath.

Julia is so uptight that she questions Paul's attire before he puts on his work uniform and starts setting up the tables at a private party for old women. But once giant wasps attack, Paul suddenly becomes useful, nay, manly. In other words: Julia starts to see a side of Paul that's not typified by puppy-dog pouting, and boyish, uh, juggling (yes, in one scene, Paul actually juggles while Julia looks on with mute disdain).

Which wouldn't be such a bad thing if circumstances didn't keep nudging Julia into Paul's arms. He impresses her by volunteering to leave the safety of the women's wine cellar to search for the keys to her van. And before that, both a Latina maid, and a surly (but essentially likable) small-town mayor (Lance Henriksen, oy vey) commend Paul for being a man who has the hots for Julia. The latter endorsement is especially dispiriting: after downing a bottle of vintage red wine, Henriksen's character growls, "That young man has balls of steel. To be a man you have to be a man."

By the way, there are motorbike-sized wasps in this film. They are not especially well-lit, but they do puncture things and burst of big holes in the sides of annoying supporting characters. They ooze and stab and buzz just fine. They're not bad, if you can get a good look at them through over-edited, poorly-choreographed sequences.

But back to Paul, and his would-be conquest Julia. Julia has some agency in "Stung," but not enough to make her sympathetic. She may stab one wasp with an icepick, but she doesn't really do much damage, and is only really a threat to the wasps whenever Paul is busy suffering for his "poontang" (his phrase, not mine). Julia is, in that sense, only as empowered as all the other chilly-but-capable femmes you'll find in schlocky horror films. She's a fantasy projection, not a force to be reckoned with.

You can tell that "Stung" is really Paul's fantasy too in several ways. There's a weirdly vestigial sub-plot at film's end involving neurotic bluehair heir Sydney (Clifton Collins Jr., character actor par excellence) that delves into mommy issues that Paul rejects in order to put aside his childish pre-animal-attack impulses. And before that there's also the scene where dorky musician Larry (Daniele Rizzo) tries to make a move on Julia, but backs off after he finds out that Paul's already got his eye on her (it's the bro code: he saw her first). Paul transforms from harmless pest to nefarious annoyance right around when he flirts with Julia and all he can manage is "Do you like making out?"

So yes, Paul may look like just another stick figure protagonist in a barely competent indie horror film. But he's so much worse than that, thanks to his creators' varied attempts to make him likable for all the wrong reasons. By film's end, it becomes clear that Paul's virility is the only emotional stake grounding "Stung." You won't care if he lives or dies in the end, but you will be forced to wonder whether or not his out-of-thin-air derring-do will get him laid. Nobody deserves sex, especially not a guy who feels threatened by a professional woman who needs rescuing from a sudden wasp attack. 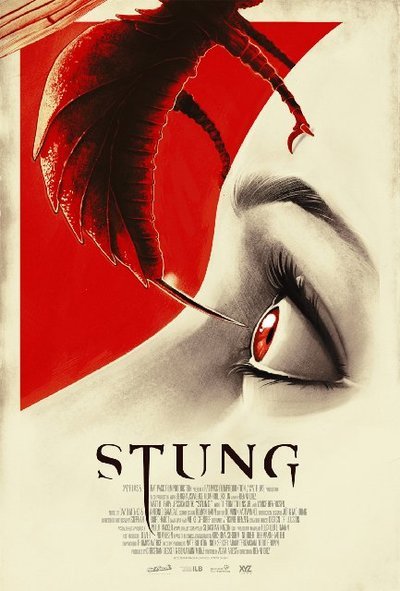