The boy who blackmailed his way to college

This is the story of high school student Carson Phillips (Chris Colfer, from the television show Glee, who also wrote the screenplay). As the film opens, he is killed by a bolt of lightning. From there, it flashes back as Carson recounts his elaborate scheme to gain admission to Northwestern University. He has ambitions to fulfill as a writer, editor and diplomat. And he yearns to break free from the confines of Clover (population 9,000), a colorful, confused suburban trap that seems to let no one escape.

Carson's school has all those familiar types we recognize from high school movies (and high schools), from "The Breakfast Club" to "10 Things I Hate About You." There's the innocent nerd, the arrogant cheerleader, the dumb athlete, the glum goth, the addled drug addict and the closeted stereotypical gay couple. Carson views them as stepping stones to fulfill his plan for college acceptence -- by blackmailing them into writing for his new literary magazine.

His home life features the usual suburban dysfunction, including that fog of denial that haunts unhappy movies like Sam Mendes' "Revolutionary Road" (2008). Here, however, we smirk at the characters' cluelessness. They are deeply unhappy, but would rather live a shallow life of television talk shows than face their demons.

Carson has an alcoholic, over-medicated mother (Allison Janney from TV's The West Wing) who keeps reminding him that she wished she had aborted him. His absentee father (Dermot Mulroney) is little more than a memory who pops up in the occasional phone call. His nursing home resident grandmother doesn't even recognize him as she tells him precious memories of her beloved grandson.

What makes this film rise a bit above the pack is the recurring idea that everyone wants to leave their nests and fly high into the sky, but few are able. Some people get weighed down by their responsibilities. Most people, the movie says, do not spread their wings because they are simply too frightened. They instead talk themselves into despair and fear. Some are so afraid of success and the inevitable disappointments that come with it that they try to quash everyone else's dreams.

So, at first, we dislike Carson as a condescending, manipulative jerk, but we eventually realize that he is the only one willing to act on his ambitions. If I had been like him in high school, wanting to reach my full potential while everyone else told me to just pick a high school stereotype and conform to it, perhaps I would be as frustrated as he is. Interestingly, that peculiar amnesia that comes with aging seems to let us forget some of what we experienced in high school. There are memories in this film that are happy or sad, but all seem to define the characters. Of course, I hope that most of us would not resort to blackmail to reach our dreams.

Director Dannelly's earlier feature, "Saved!" (2004), portrayed a clash between the religious and non-religious students at a Christian high school. That film seemed more original and edgy than this one in its satire about the impious conduct of the devout. Perhaps those characters were more memorable because they provoked deeper feelings from us. Allison Janney is outstanding, though, showing multiple emotions in any given expression, as a hurt, frightened, worn-out mother, while most of the rest of the characters are vivid enough for stock, but not much beyond that.

Nevertheless, "Struck by Lightning" reminds us that while we may hope to find that four-leaf clover, that lottery ticket that will solve all our worries, we are more likely to get hit by lightning on a sunny day.

Omer M. Mozaffar is one of Ebert's Far-Flung Correspondents. 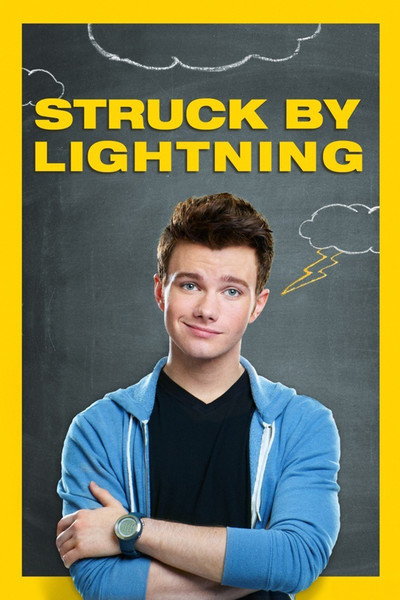