There’s a great scene a little over halfway through David Gordon Green’s “Stronger,” in which Jeff Bauman, who lost both of his legs just above the knee in the Boston Marathon bombing, is trying to stand on new prosthetics for the first time. His face is pained and he mutters something about pins and needles, but everyone around him is just cheering, his mother shouting “You look awesome!” He doesn’t feel awesome. “Stronger” transcends your standard inspirational drama mostly through two fantastic performances, but also in the way it understands that trauma isn’t inspirational to the people who suffer it. During much of “Stronger,” Jeff will be told he’s a hero and reminded to stay “Boston Strong,” but will question again and again just what that means. And then Green’s film subverts its own message about the commodification of tragedy to become something even more remarkable—a statement on the value of images of survival. Some of it is too broad, and I wish the film dug a little deeper at times, but this is one of those rare inspirational films that earns its inspiration.

Screenwriter John Pollono’s adaptation of Bauman’s memoir spends very little time on set-up, but Green and his cast make the most of it. We meet Jeff (Jake Gyllenhaal), getting out of a sticky situation at his job at Costco so he can be in his lucky chair to watch the Red Sox game. They lost the last two because he wasn’t there. At the bar, we meet his beer-swilling family, played with sometimes-too-broad Boston accents and personalities by Miranda Richardson as Jeff’s mom and Clancy Brown as his dad, along with famous Boston comic Lenny Clarke as another relative, and others who sometimes feel straight out of Boston central casting—love the Sox, drink before noon, yell over each other, etc. Jeff’s friends and family sometimes feel a bit too broadly sketched, but they’re captured lovingly.

We also meet Erin (Tatiana Maslany), Jeff’s on-again-off-again girlfriend, who just happens to be running in the Boston Marathon the next day. In what feels like an effort to try and win her back a bit, Jeff makes a sign to greet her at the finish line. He’s at ground zero when the bombing happens, and he loses both of his legs below the knee. He becomes an even bigger story when he reports that he saw one of the bombers. Not only is he a survivor, but he’s going to help take down the enemy. Jeff becomes an image for a nation in need of a hero. But Jeff, with Erin by his side, has to learn how to survive as more than just a symbol.

Green and Pollono are at their best here when they’re focusing on the details of Jeff’s situation in ways that gauzy melodramas usually overlook. There’s a striking scene in which Jeff’s dressings are taken off for the first time, out of focus in the background, as we stay on Jeff’s face in the fore. He can’t look, and so we don’t see them clearly either. He’d rather look into Erin’s eyes. He’s scared and in pain, and she’s the only lifeline. Other scenes of tactile process—like making casts for his legs or how hard it is to get in the tub—add gravity and realism to what could have been a more manipulative experience.

Of course, what really grounds “Stronger” is the work by Gyllenhaal and Maslany, both giving performances at or at least near the top of their already-notable careers here. They’re both remarkably committed physically, but it’s how completely they stay in the moment that makes “Stronger” work. We believe their situation entirely, never feeling like they’re merely pulling heartstrings to get a response or playing melodrama instead of truth. So many performances in inspirational dramas are all about the external mountain the hero or heroine has to climb, but Gyllenhaal and Maslany recognize that it is the internal drama that will make these characters resonate.

A few of the beats don't work—some inspirational scenes would have been more powerful if they had been just a bit shorter—and there are some “Boston atmosphere” moments I just didn’t quite believe (like the cop who asks for a photo after pulling them over). But every time that “Stronger” threatens to become just another piece of Hollywood inspiration, something happens to bring it back to Earth, most often through the smart choices made by Gyllenhaal and Maslany (and, of course, Green’s direction of them). “Stronger” feels sometimes manipulative—it would be difficult to tell this story and not come off that way—but I’d be lying if I said the manipulation didn’t work.

Jeff Bauman wondered aloud why he was considered strong just for being in a place that was bombed. He didn't consider himself a hero and shied from the spotlight. But the film about him becomes a striking testament to the power and human need for symbols of hope, and has the ability to be as inspirational to someone as Bauman’s true story. It understands the pain in Jeff’s face when he was standing for the first time, but also gets that for those who needed to believe in him, the moment was pretty “awesome.”

This review was originally filed on September 9th, 2017 from the Toronto International Film Festival. 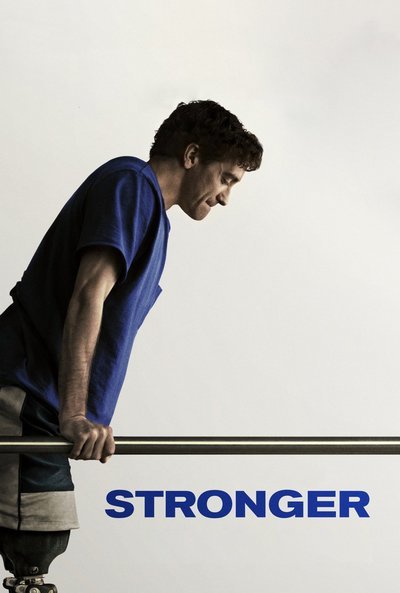 Rated R for language throughout, some graphic injury images, and brief sexuality/nudity.

Writer (based on the book "Stronger" by)