"You were toe to toe with evil, and you won!"

The alarm clock buzzes. Keanu Reeves wakes up fully dressed in a striped shirt, raises his gun and rolls out of bed. He puts his piece on the bathroom sink, next to his toothbrush, and takes a good long look at himself in the mirror. Then he pukes in the toilet. He climbs into the car and heads down the freeway as a glowing orange orb shimmers behind the skyscrapers of Los Angeles. Only the sun isn't rising. It's setting.

Night: Koreatown. Tom Ludlow (Reeves) stops by a liquor store and gulps down a couple teeny airline bottles of vodka. He insults some Korean hoods, who want to buy a machinegun he's got stashed in his trunk, insinuating that they're Japanese. "You dress white, talk black and drive Jew," he tells them before throwing in an all-purpose anti-Asian slur.

Ludlow is a racist cop, a renegade cop, a vigilante cop. We know this because next he wantonly massacres a bunch of Korean bad guys and makes it look like they shot one another. Then, when he's confronted by his African-American ex-partner, Terrence Washington (Terry Crews), he yells, "I'm racist!" In response, Washington calls him a "white boy." This seems especially odd because the Chinese-Hawaiian-Caucasian Reeves is, ancestrally speaking, roughly as white as Barack Obama.

This is the set-up for "Street Kings," which immediately forgets it ever brought up all that racial stuff, anyway. Almost as quickly, it loses interest in its main character's alcoholism. Then it raises the idea that Ludlow may still be in pain over his wife's death, but instantly ignores that, too, turning its deficit of attention to the killing of a police officer. The murder investigation leads the bull-headed Ludlow -- who, mind you, does not play by the rules! -- along a twisted trail of corruption that leads all the way to the highest levels of the LAPD. Yeah, I know. Who could have anticipated that?

If you wanted to make a strictly generic parody of crime writer James Ellroy's hardboiled Southland fiction ("L.A. Confidential," "The Black Dahlia," "White Jazz"), could you do worse than to hire Ellroy himself and then, maybe, rewrite him a few times? Maybe not, because that's what appears to have happened here. Ellroy is credited with the template-stamped story and is listed first in the screenplay credits, followed by Kurt Wimmer and Jamie Moss, each of their names separated by an "and" instead of an ampersand, which tells you that they did not work together. Director David Ayer (writer of "Training Day" and co-writer of "The Fast and the Furious") also has been fingered as a scripting suspect, but he is not identified by name in the final lineup. If you've seen the trailer, know that about half of what's in it isn't in the final movie. That's a hint.

"Street Kings" is an anemic attempt to evoke the big, shiny action pictures of the late '80s and early '90s, the heyday of Bruce Willis and Arnold Schwarzenegger, when Timothy Dalton was 007 and Clint Eastwood had fewer wrinkles and bigger hair. Back when, if an aquarium appeared in a scene, somebody was damn sure going to shoot it before the movie was over. The films, good and bad, were loud and slick and mostly set in L.A., directed by people like John McTiernan, Richard Donner, Tony Scott and Renny Harlin: the "Die Hards," the "Lethal Weapons," "The Rookie," "The Last Boy Scout," "The Last Action Hero."

Reeves got in on that wave, too, with "Point Break" and "Speed," dodging bullets and breaking regulations in the name of the law. Those were the days when overkill was never enough, and "Street Kings" at least gets that part right. The crooked cops are not only crooked, they're also murderers willing to drop everything to rape their victims' widows and girlfriends just for fun. They are bad, bad, bad.

So is the screenplay, which reads like a Bartlett's of general-purpose action-movie lines:

"You were toe to toe with evil, and you won!"

"Why can't you have a normal life like everybody else?"

"Everything I touch dies."

That doesn't even scratch the surface of the movie's banality, but every once in a while there's a real doozy like: "He's got a Ph.D. in catching cops slipping up!" Or a text message from one crooked cop to another: "He's here. Kill him." And then the dude signs his nickname.

But come on, don't give Keanu Reeves -- or anybody for that matter -- a line like this, about Tom's ex-partner: "We were black and white in black and white, back when it meant something." Are these people trying to make the "Showgirls" of retro-1990s cop movies?

Sophomore director Ayer ("Harsh Times") is maybe not so sure. He seems invested in the chases and shootouts, but sometimes his spatial relationships break down, and you can't tell who is where. In one gunfight, an entire harvest gold-colored refrigerator materializes out of nowhere. Meanwhile, Academy Award winner Forest Whitaker doesn't seem to know what movie this should be, while "House" star Hugh Laurie -- giving exactly the same performance he does on TV -- may be in on the joke, even if nobody else is. 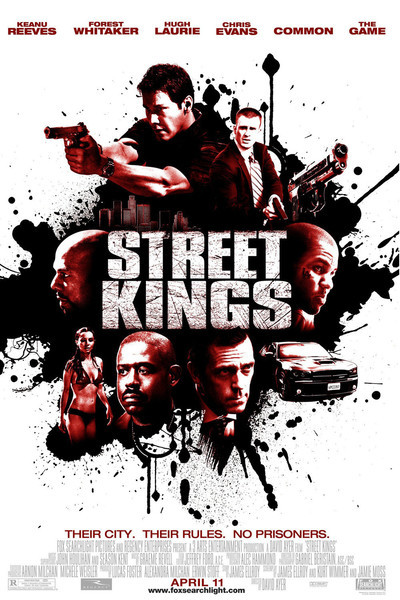 Cedric The Entertainer as Scribble